Five things I love about Poland 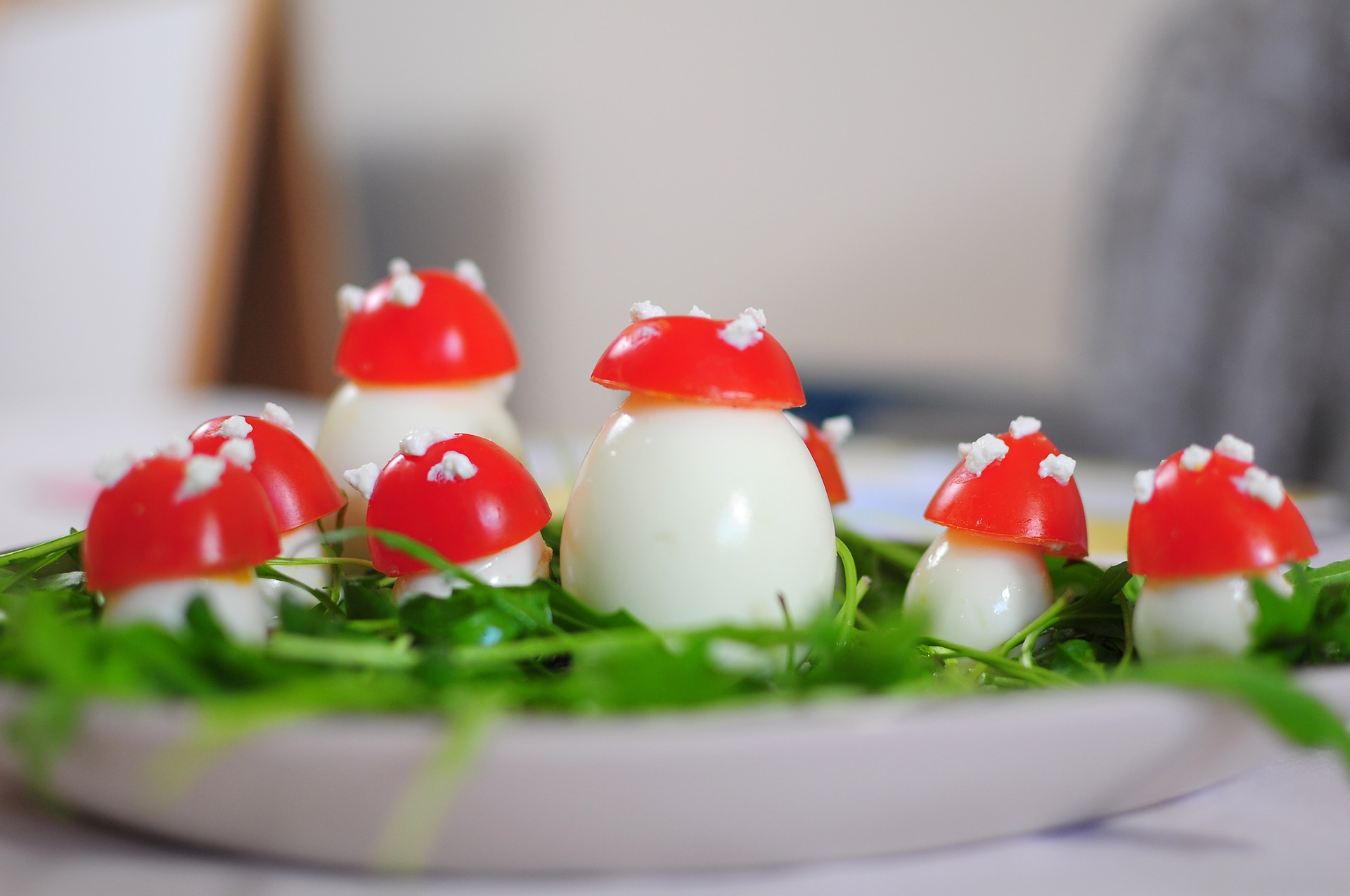 As I’ve travelled around Poland this summer, I’ve thought about the many differences between Polish and British culture. Some are quite superficial but others much deeper. Here are the ones that have shouted out loudest to me!

Regardless of most peoples’ different standards of living, I’ve noticed how people eat out every day and eat healthily, ie ordering and eating home-cooked, local food (without packaging). Here in Kraków, we take our daily breakfast at the local Bar Mleczny (Milk Bar) – so called because originally in the 19th century they sold products from milk, eggs and flour. 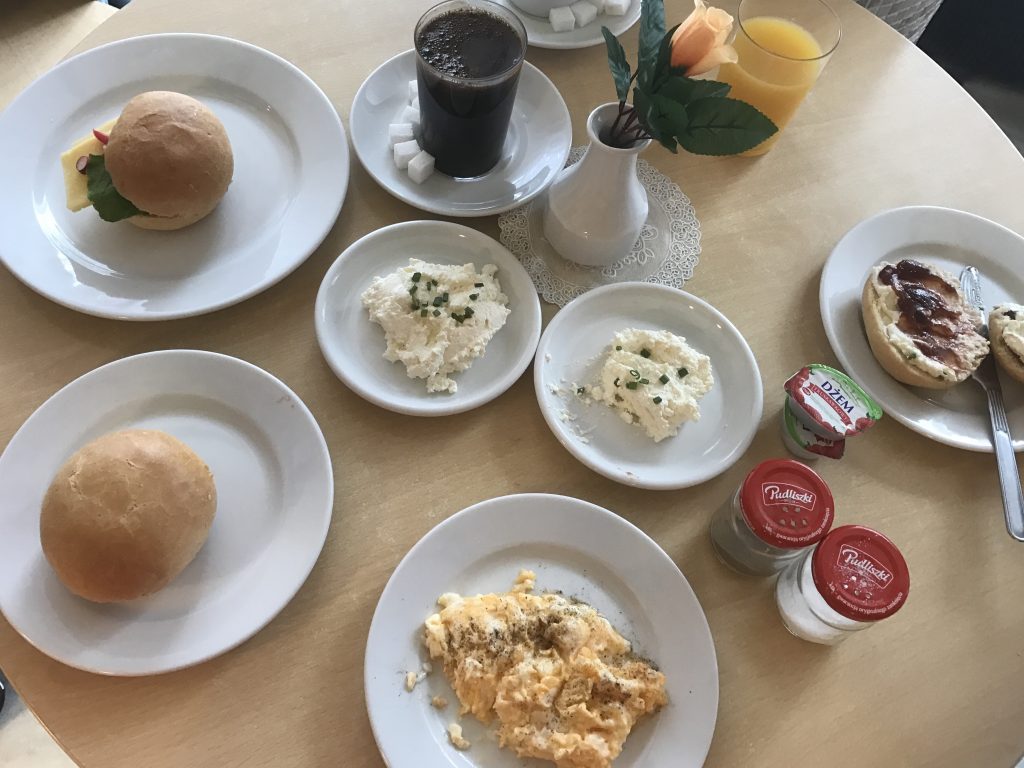 This costs us about £1.60 per person and it is utterly delicious and plenty – fast food, without a hint of what that usually means.

Perhaps because many people still live in small flats, there’s much more family interaction in a good way, up and down the generations. Poles are great talkers and I’ve found that even children are very interested in the world around them, including politics. 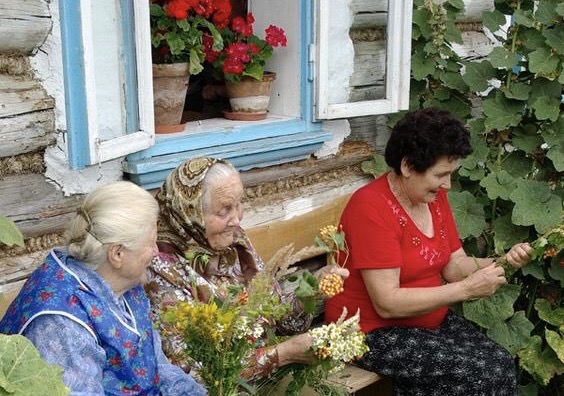 Babcie (grandmothers) are absolutely key to family life and as people have children early, they’re still of an age to help. And the sense of family includes those deceased. On a ordinary summer’s day in a small village in eastern Poland we weren’t the only ones visiting the cemetery to pray, leave flowers or candles. 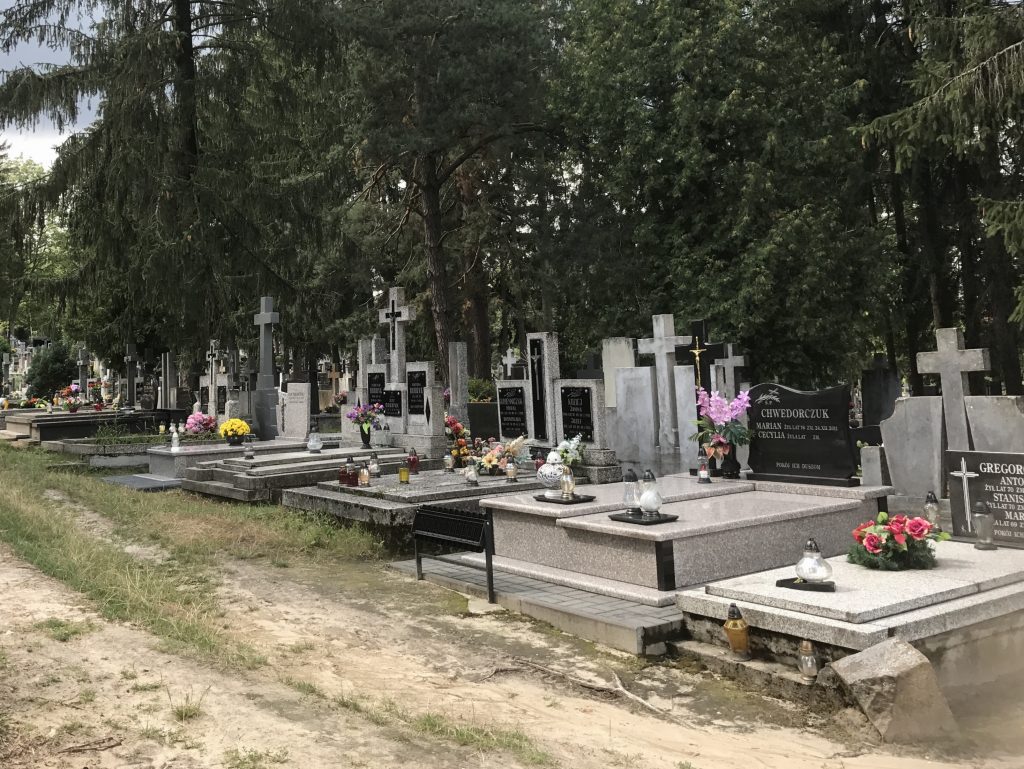 British cemetaries in comparison are usually deserted. My Aunt couldn’t believe how small our graves are in comparison to these grand affairs, ‘almost as if they show a lack of respect’. I suspect in the UK though, it’s more to do with available space in an increasingly crowded island.

Trams: the kings of public transport

Through many people own cars, most cities have a modern tram network that’s really easy to figure out. They are a staple for most people. Just like a metro map in London or Paris, each city here has a network you can easily get around on. The maps are displayed at each stop, many are digital and track your journey in real time and in some places even have a bit of Polish humour. 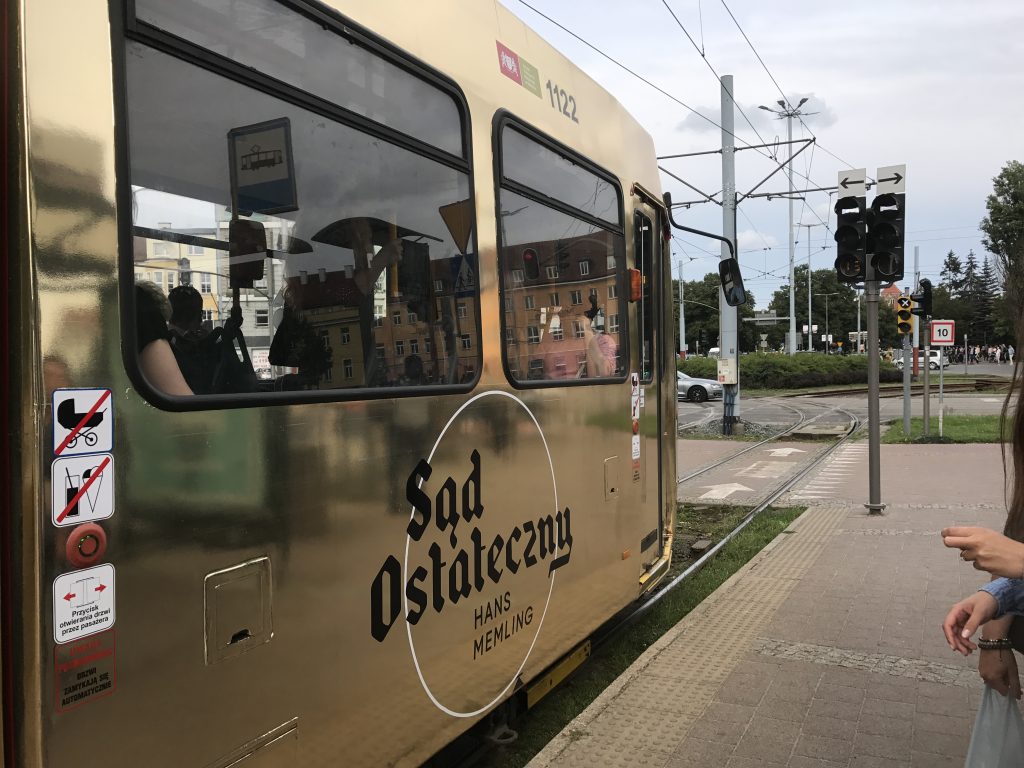 We had great fun travelling through the Opera Bałtycka stop in Gdańsk which was always announced to the tune of Toreador from Bizet’s Carmen. So why in the UK do I struggle to find a bus timetable or where it goes?

A little bit of land

As Poland is still a more agrarian society, many of us continue to have links with our families in villages. Most people have a działka (strip of land) somewhere and for weekends, visit old summer houses built on these plots to relax and perhaps have a barbecue. 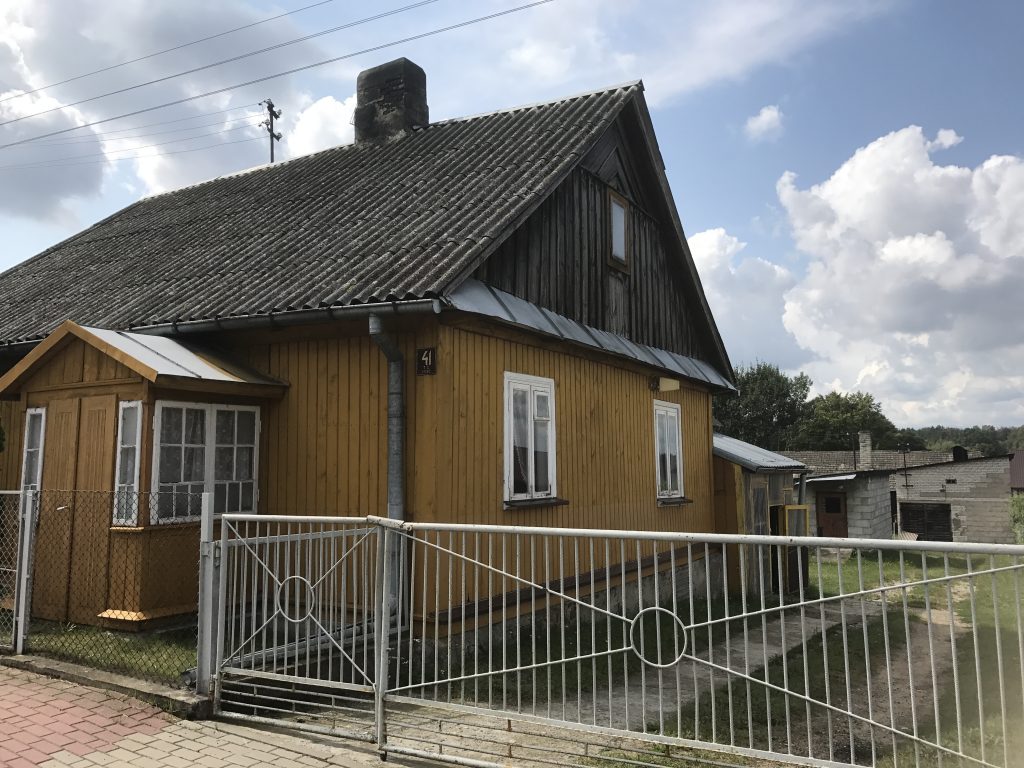 This, once a family home where my cousins from Warsaw would spend their summers, is now only inhabited by one uncle, but some of the family run a larger farm and my Aunt has a summer house close by. Overall nearly 12% of employment in Poland is in agriculture, compared to less than 2% in the U.K. That’s also not counting all the small holdings who are excluded from these figures. Although this has decreased from nearly 18% in 2004, the year of EU entry, it’s still considerable and means we haven’t lost those vital links with the countryside. Which brings me back to food but  instead there’s another great Polish institution…

Wherever you are on a Sunday, or indeed any weekday, there’s always the opportunity to attend Mass. Here by lake Wdzydze in the Pomeranian area of Kaszuby, Northern Poland (where I have just spent a couple of days) for those that can’t get to the church, the church comes to you. 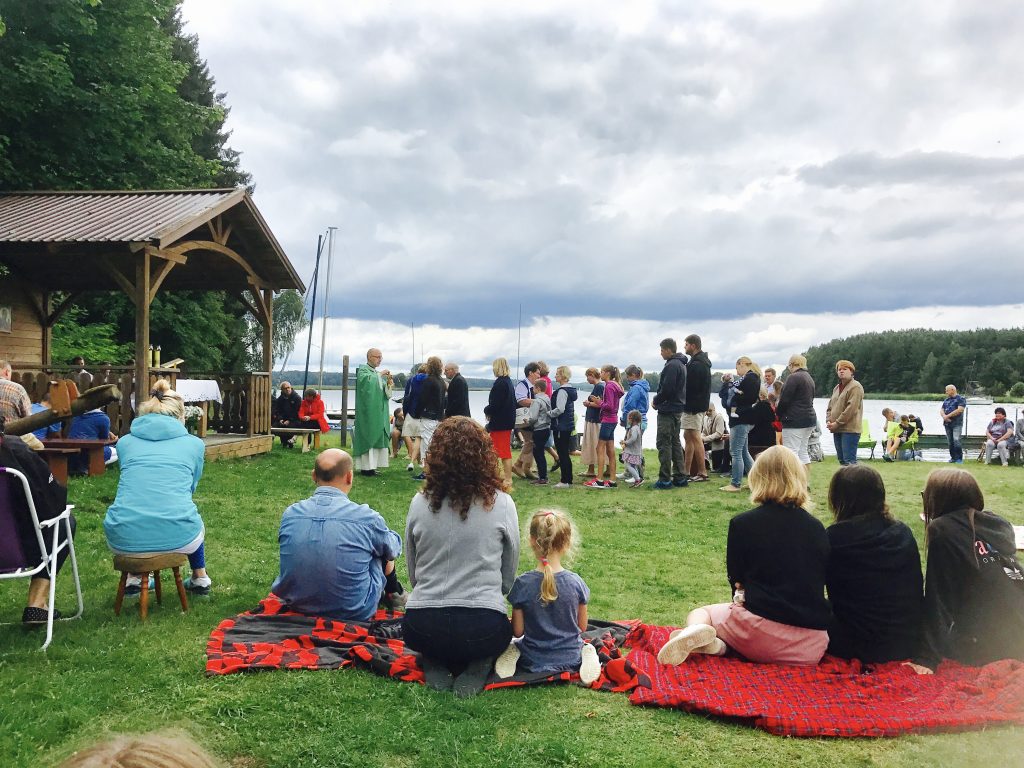 Anyone who went on the scout trip to Kaszuby and Wilno in 1997 might remember walking to this spot for Sunday Mass. We decided that our unofficial timeline of when this wonderful trip happened, was only 10 years ago, to make us feel younger!

That’s my five for this trip, but as we all know there’s hundreds of things to love about Poland, and I’m off today to explore Ojcowski National Park to see if I’ll add it to my list. I might even see some real toadstools instead of 70’s style egg and tomato ones.