Joining the Crocodile – why do the English so like to queue? 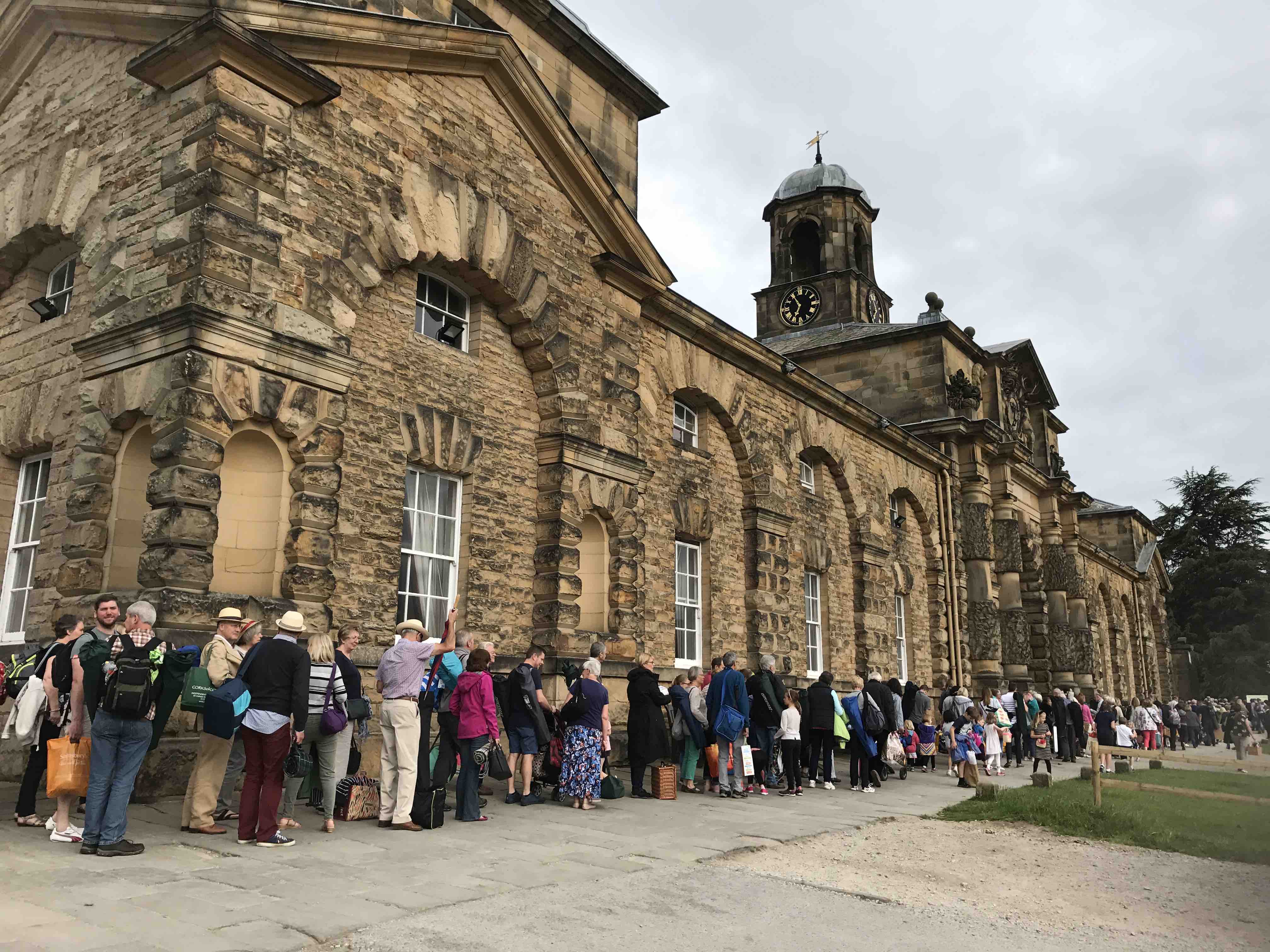 The Wimbledon Championship queue is the queue of the moment, but this weekend for the nth time we visited the Chatsworth Summer Garden Party, hosted by the Duke and Duchess of Devonshire for the Friends of the Chatsworth Estate. We pay a yearly subscription to belong, which is good value for frequent visitors like us. And a garden party is such a deliciously British thing to do!

Unusually for us, we arrived nearly an hour early and couldn’t quite believe how most people calmly walked up to the queue at the closed gates, armed with wicker picnic baskets, bulging rucksacks, trolleys full of chairs and food, even a child’s pushchair loaded up with goodies. And they patiently stood there in line for forty minutes until the queue stretched around the corner of the Stables building and up the slope beyond. Amazing!  We had intended to go for a stroll but being the end of a long week we  felt tired and opted instead to sit in the car, eat tortillas and ‘people watch’.

My Mum told me that when she arrived in the UK in the 50s, people would say “I’m off to join the crocodile” when going to join a queue and she hadn’t a clue what they were talking about. I’ve not heard this expression so I can only assume it was a hangover from ration queues during and after the war (rationing in the UK only came to an end in July 1954).

So what was the queuing about here?

I’m really not sure. At Chatsworth there are no preferential seats or limited freebies to bag, just a massive expanse of lawn to choose your spot. As advertised, the gates opened on the dot of 6.45 pm and people filed in, to be greeted by the Duke and Duchess and several Chatsworth staff, one handing out black plastic bags, to leave the lawns pristine at the end of the night. Once through, there are (literally) acres of space to lay out picnic blankets, fold out chairs and tables and get out the bubbly.

This year University College London carried out research (yes formal research) into the queuing phenomenon.  Professor Adrian Furnham, said: “The British have a well-established culture of queuing and a very specific type of queue conduct, one that has been known to confuse many a foreign visitor.”

Apparently people will wait an average of six minutes before giving up in frustration, but if the number of people behind them has grown to six people or more, this desire disappears entirely. This was based on everyday queues, in supermarkets, banks etc so probably not about queues to get into places. There are always, however,  some no-nos:

At the O2 this year, someone snapped a queue at the O2 where hundreds of people had formed their own neatly winding line where barriers to control the queue didnt exist: someone commented that “When a Brit stands still, they form a queue of one.” 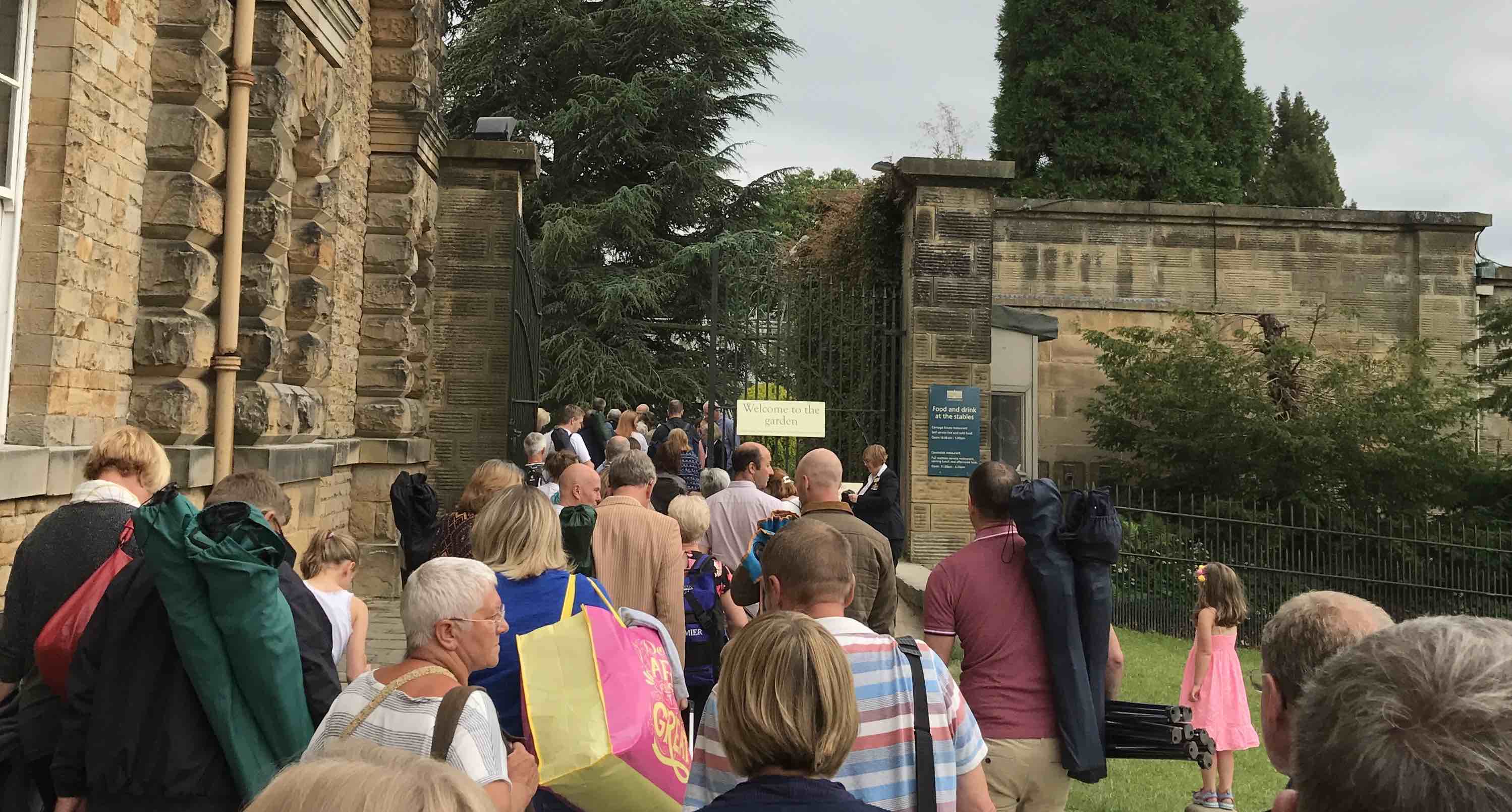 Were the Chatsworth guests dressed elegantly?

Not really. Chatsworth in the evening can be quite cold and whilst some little girls were in lovely dresses and a few gents were in straw hats and linen jackets, the ladies were on the whole, fleeced up to the ears by the end! Apart from of course, the Duchess who wore a beautiful floor length cloak.  I wore a white jacket with jeans and a blue Warehouse jumper I’d bought earlier that day in the John Lewis sale. How British. 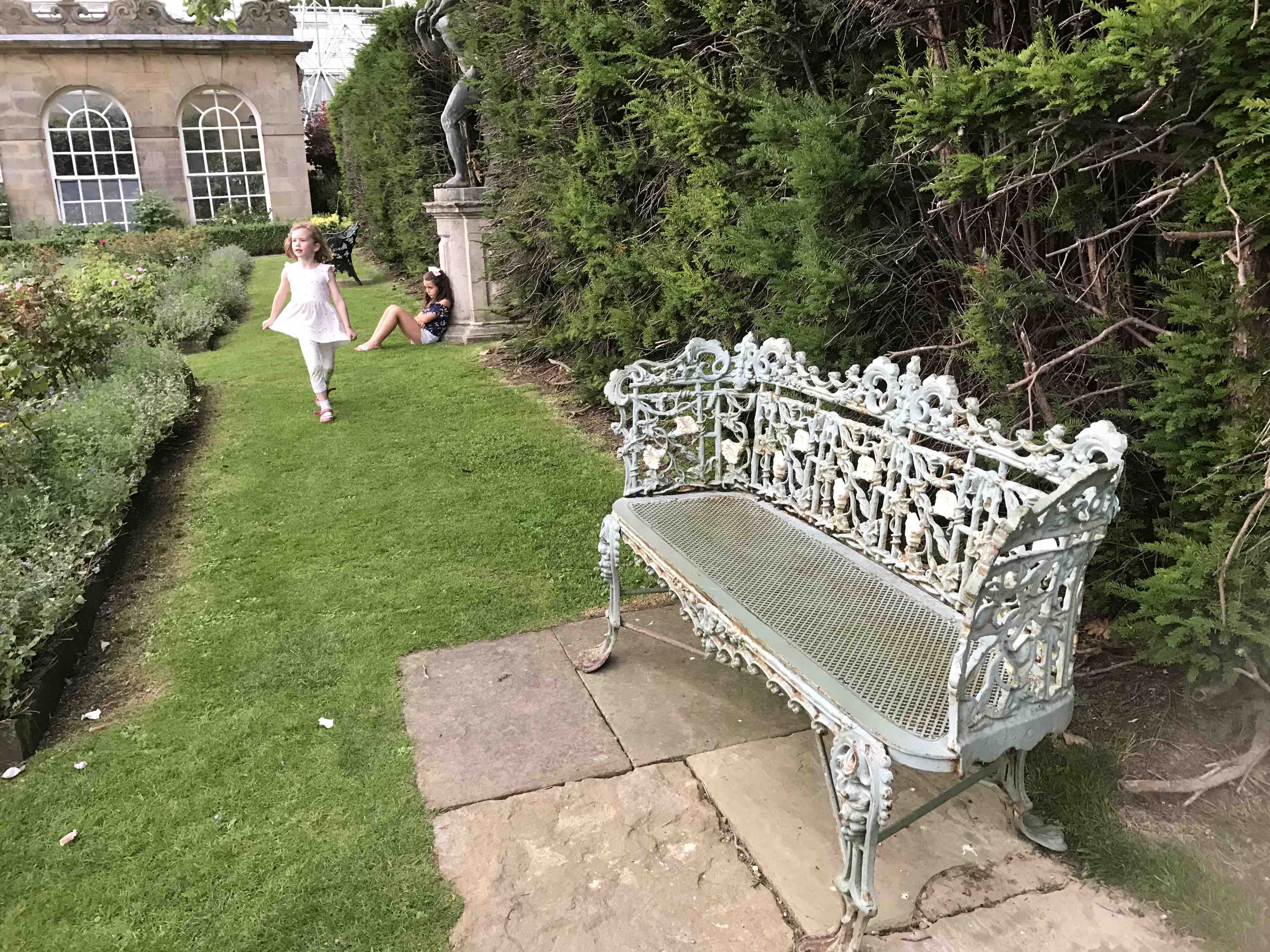 So what to eat at a Garden Party?

Not unlike an afternoon tea, the garden party guest generally has sandwiches, cake, lemonade, tea and coffee.  And often, bubbly.  At Chatsworth, some people had hampers, others brought their own Pimms, strawberries, scones and cream and we brought pork pies, cheese bakes and mille feiulles.  Lucy Worsley says that Queen Victoria liked to hold what she called ‘breakfasts’, summer outdoor parties in the garden of Buckingham Palace, circulating in her landau, thereby entertaining huge numbers of people at once. These continued throughout the 19th century and today, the Queen hosts at least three a year. And no, I haven’t been to one, though I did get a last minute ticket to the Queen’s Golden Jubilee Party in the Palace in 2002 when I was working in the press office for the event and ran, yes ran down a corridor to get into the garden in time for Brian May standing on the roof playing the National Anthem. Perhaps that’s why I’ll never get an invite?

What to talk about at?

According to Tatler magazine, if all else fails, try to remember Mrs Dashwood’s advice to her youngest daughter Margaret in Austen’s Sense and Sensibility  ‘If you cannot think of anything appropriate to say, you will please restrict your remarks to the weather.’ 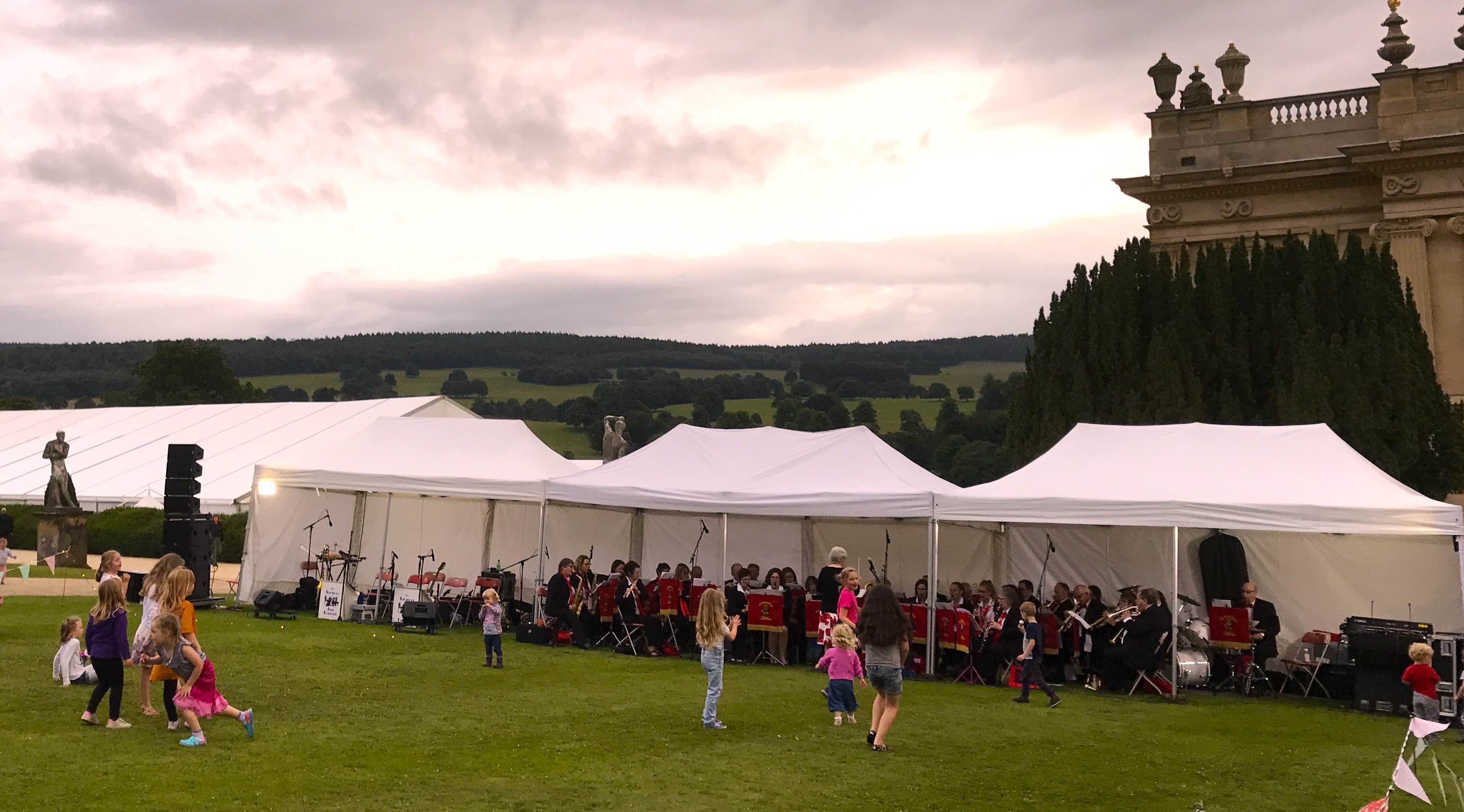 Although our conversation extended to much more than that, the children had a great time, dancing to the two bands – the Hallamshire Military Concert Band and the Saratoga Jazz Band.  Both were superb and we were trying to dance the Charleston as we left (no photos of our attempts sadly). 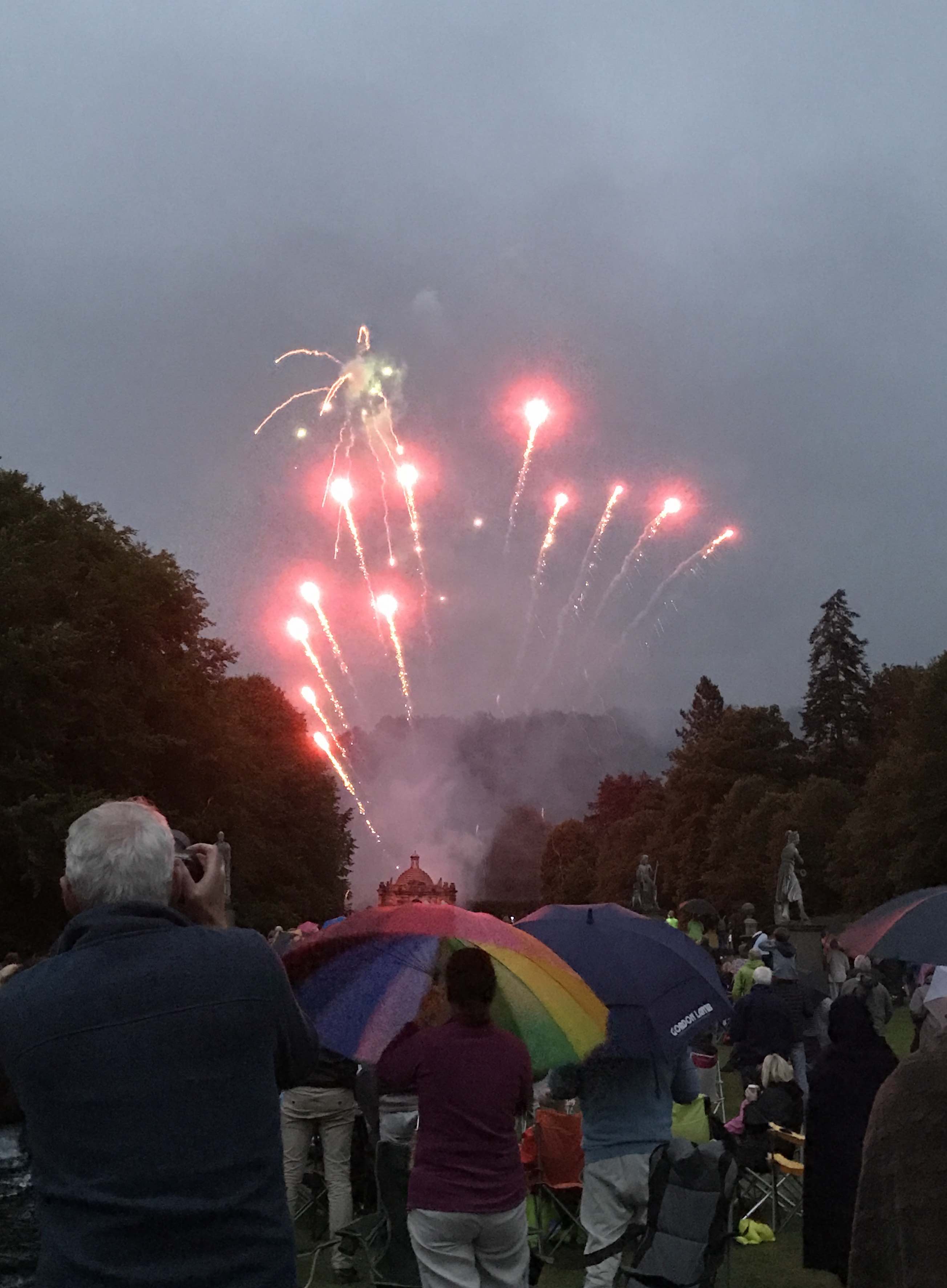 Always, always, say thank you to your hosts.

After all they don’t have to put one on, and this party is free for Friends of Chatsworth, so here’s a big thank you to the Duke and Duchess of Devonshire and all the Chatsworth staff for a superb evening. The fireworks to end the evening were amazing, soft and delicate with a great musical accompaniment. A very British experience every time, and yes, everyone queued out in an orderly way at the end.