Kraków: streets to beat the stress

While Kraków is overflowing with beautiful, historic buildings to visit, on my latest trip (in between renewing insurances, resolving bank card problems and finding a new bin for the bathroom), I spared a couple of hours to stroll through some of my favourite streets (street is ‘Ulica’).  Cafe culture is alive and well here in Krakow, and many of these are frequented mainly by Cracovians. I love these places, and last week I had the time for a sernik (cheesecake) here and a cocktail there.  Next time you’re in Kraków, why not dawdle along these delightful lanes when you want to slow your day right down:

A curved street which has its origins in the 13th century when it was full of  goldsmiths and blacksmiths: it takes its name from the Zakon Bracia Mniejszych (Order of Friars Minor) otherwise known as the Franciscans. It leads south from the Rynek to the Franciscan church on Franciszkańska street. The singer Grzegorz Turnau made this street famous with his song Bracka in 1995 and his family own the atmospheric cafe Nowa Prowincja at No.3 – 5 with its superb apple cake and divine hot chocolate, literally a delicious drink of melted chocolate.  Also, as featured above is De Revolutionibus Books and Cafe at No.14, a place for philosophical debates and events, with a huge range of books on art, philosophy, theology and psychology but also a little haven of peace for when you get weary. There’s a lovely little corner table for children with amazing books and toys. I always buy one or two especially for my son.

Walking south of the main Rynek you could easily miss this street as most people walk down ul Grodzka (street) with its trendy shops. Yet here, parallel to lower Grodzka street is one of the most beautiful mediaeval street in Europe filled with a cornucopia of Polish history. Acquiring its name from the vast number of clergy residing there, on this cobbled street you’ll find Jan Długosz’s house at  No. 25 (Poland’s first historian), the Stanisław Wyśpiański  museum at No. 9 (Polish artist of the Young Poland movement), various bishops palaces, the ornate Hotel Copernicus in a mediaval building called Kamienica pod Motylem (House under the Butterfly) and the Museum of Cardinal Karol Wojtyła (later Pope John Paul II).  It’s also a wonderful way of reaching the Wawel castle. 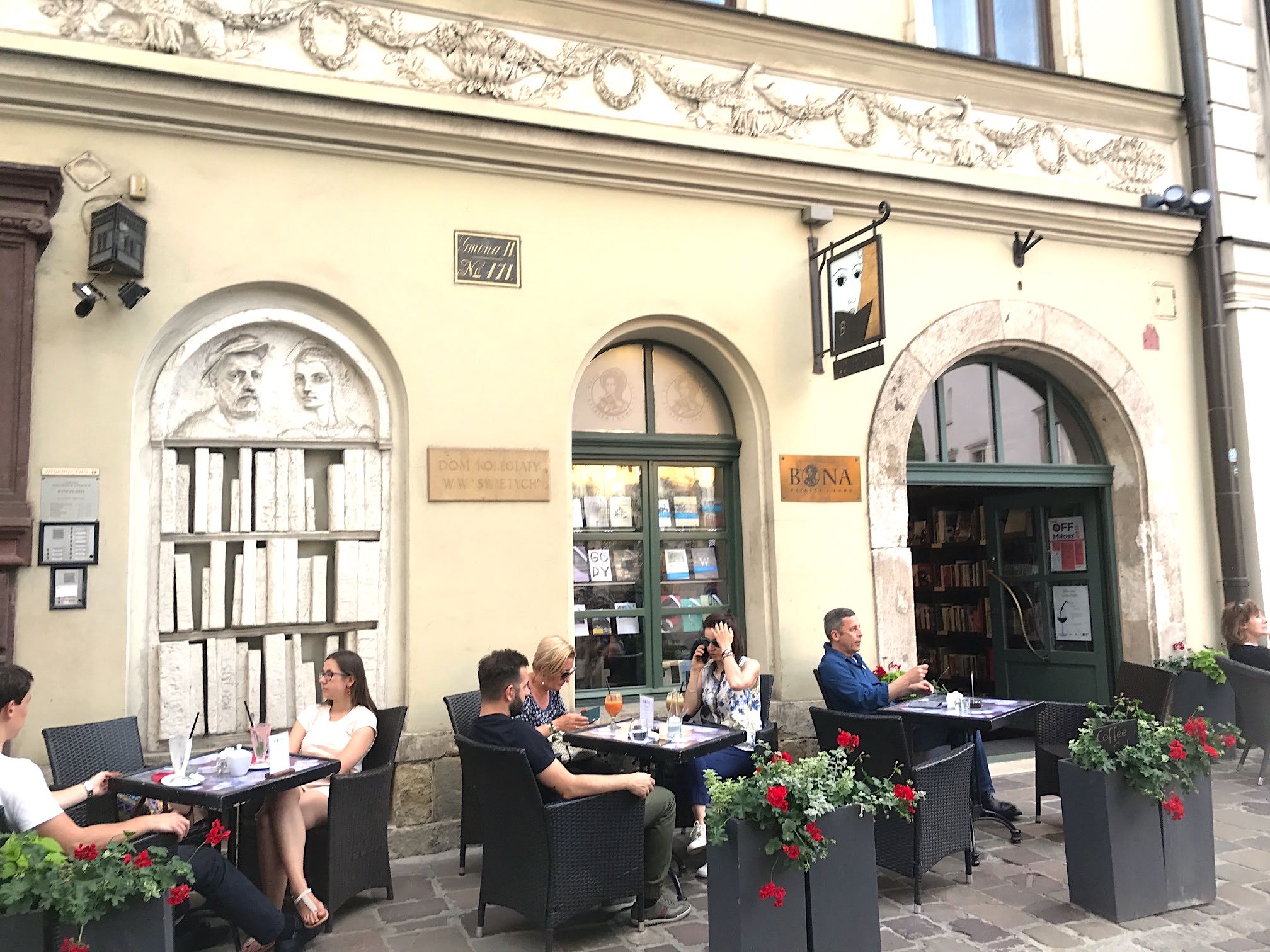 So don’t follow the crowds, and while there, do step into the literary gem of Bona cafe. You can sit amongst a fantastic selection of Polish books translated into English but also many worldwide authors translated into Polish – it has a great bookish atmosphere and the coffee is great too. 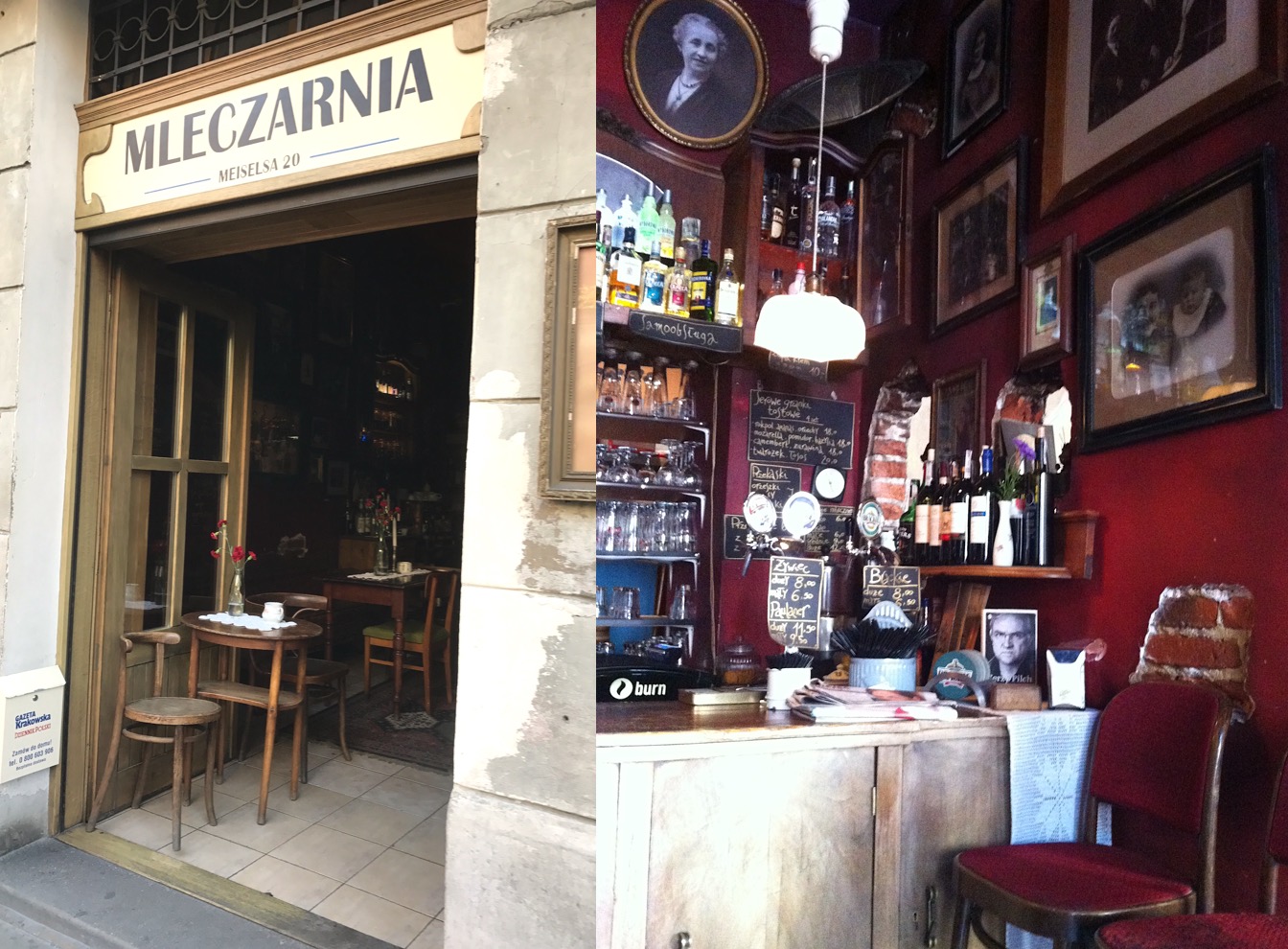 Named after Rabbi Beer Meisel, an outstanding 19th century Rabbi and patriot, this is a short side street to the popular Plac Nowy in Kazimierz and has the cafe Mleczarnia at No.17, wonderfully evocative of  its former days as a Jewish milk bar. Every rickety table and chair has its own history and spending some time looking through the old photographs on the wall will take you straight back to the 1920s and 30s. There’s a lovely leafy garden opposite too for sitting out.

This street on the Plac Nowy in Kazimierz takes its name not only from the biblical Esther, but also Esterka the mistress of King Kazimierz Wielki (the Great) in the 14th century. Here you can sit and drink at sewing machines in the Singer Cafe at No. 20, or enter a world of 60s psychedelia at Moment No.22, with a plethora of elaborate lamps. Around the corner, on ul Jóżefitów No.17, the Wręga restaurant has a beautiful garden to eat delicious platters of pierogi (mixed or specific flavour). If you venture inside, you’ll see a random selection of sea memorabilia on the wall. This is where on some evenings you can listen not only to a seashanty or two for free, but also hear a wide range of folk bands.

You definitely won’t find this street just wandering around Kraków, yet it is well worth the walk north west of the Rynek. This street just off ul. Krupnicza which starts by the Teatr Bagatela isn’t a typical central Kraków street. Once a street of factories and workshops, this is where the Kraków hipsters hang out and its fame is starting to spread. The Tytano Foundation took over the derelict Cigar Factory buildings in 2016 to create the 15,000 square metres large Tytano Dolne Młyny at No.10 as a place for startups, designers, artists and micro businesses. It’s a laid back centre of restaurants, bars and independent shops with stylish interiors amongst bare factory walls keeping an industrial feel at its heart.  You could also try the Lost Souls Alley Deadly Walk in the basement of one of the factories (only over 14s) with actors popping out of dark corners to scare you to death – though it’s not my cup of Lipton’s.

Whilst you are in the area, at No 26 on Ul. Krupnicza is the Mehoffer House and Garden cafe. Mehoffer was one of Kraków’s artists who worked with Wyśpiański on many of his stained glass artworks, and this is indeed where Wyśpiański was born.  Mehoffer hosted many of the Młoda Polska (Young Poland) movement who turned to peasant life for their inspiration and the house is an ode to Art Deco and his artistic legacy. Better still, there’s a hidden garden cafe behind – bliss for those tired feet to relax at last.