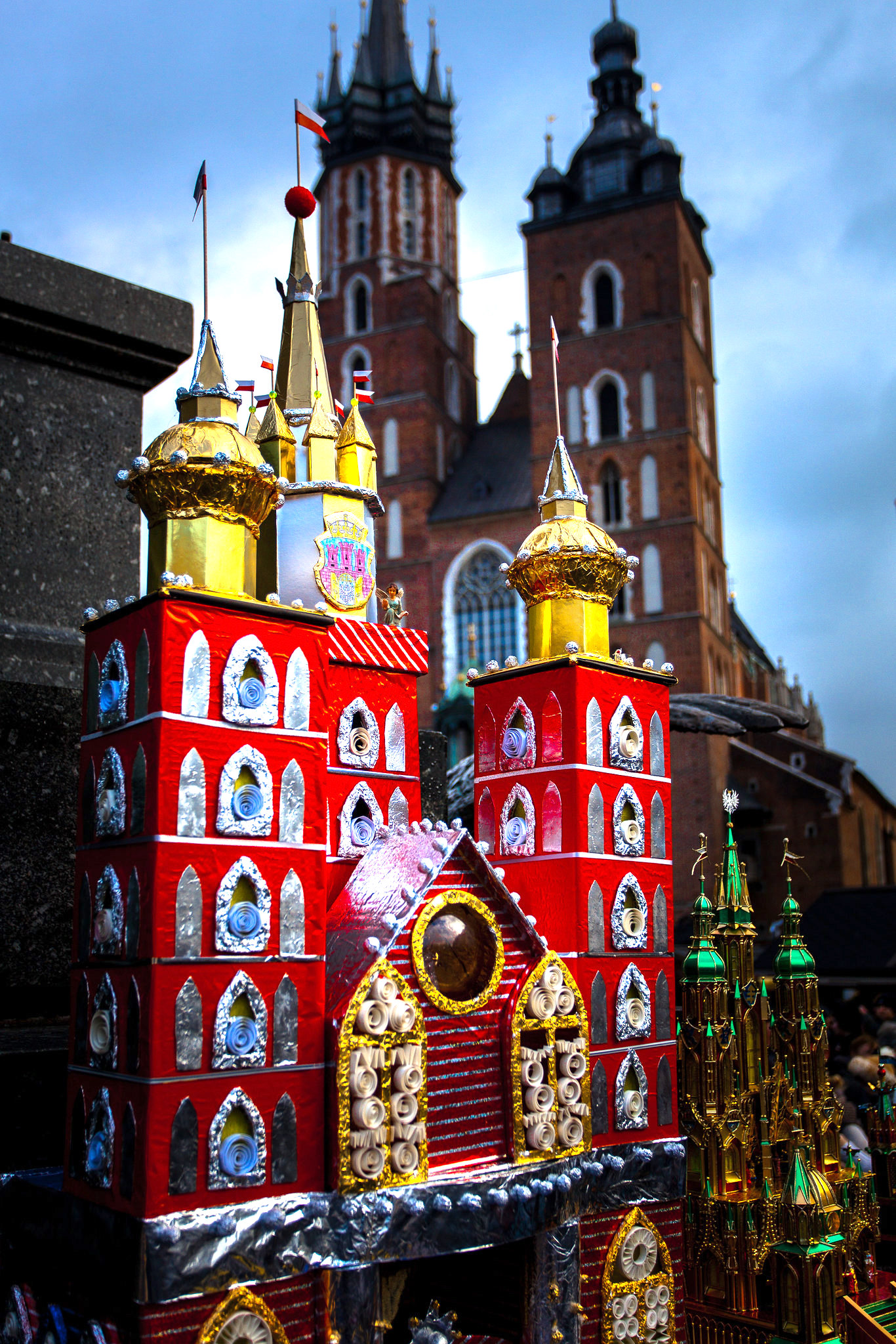 We all love crinkly sweet wrappers in dazzling colours at Christmas. I remember the delicious sweets we would string and hang on our tree as children. Poles in Kraków, however, have been rolling and shaping these foil wrappers for years to make the iconic handmade Kraków Szopka – Nativity Crib. Recently given UNESCO status for their unique cultural heritage, the 80th Kraków Szopki Competition is about to take place in the centre of Kraków.

These glowing, multi-coloured Szopki are so much more than the nativity scenes in churches and houses during Christmas – a tradition first started by St Francis in 1223.  In Kraków, these nativity scenes expanded into puppet shows but after being banned from churches in the 18th century the makers moved them outside and set them in portable churches, complete with towers to imitate the real ones. At the beginning of the 20th century there were teams making these, some up to three metres tall and after displaying them in the Market Square, they would be invited to people’s homes to perform.

Bricklayers, masons and woodworkers living in the surrounding villages west of Kraków were these master makers. In winter, when construction work outside ceased, they looked for alternative sources of income, carving wooden toy figures and small Szopki which they later sold near the Sukiennice (Cloth Halls) to be placed by children under the choinka (Christmas tree). I always did wonder why we put our crib under the tree!

Some became experts, but by the 1930s, the tradition appeared to be dying out. Seeing this, Dr. Jerzy Dobrzycki of the Kraków Museum initiated the first competition in the market square for the most beautiful nativity scene which took place on December 21, 1937.  Similar competitions for the wandering puppet shows weren’t as successful and these died out. After the Second World War the competition was revived when Dobrzycki returned from internment in Romania. At the same time, the Museum began to buy the most beautiful nativity scenes from their creators, forming a collection of 250 items today.

Every year on the first Thursday of December, Szopka makers young and old bring their works to the steps of the Adam Mickiewicz monument in Kraków’s main square. After the Hejnał (bugle) call at midday, a procession begins around the Market Square, led by a folk band. Then the Szopki are taken to the main museum building, the Krzysztofory Palace, where they are assessed by the jury consisting of historians, ethnographers, art historians, architects and artists. It was an extra bonus when I was in Kraków for the Christmas Fair a few years ago. Everyone throngs towards the flashes of brilliant colour as the szopki are brought out amongst the grey of winter.

First of all, the birth of Jesus Christ must be presented in some form, however small. It also has to contain elements of Krakow’s historic architecture and entrants can add other elements of regional culture or famous historical characters if they wish. A few years ago, a series of famous women appeared in a Szopka – from scientist Marie Curie-Skłodowska on the left to Emilia Plater (soldier) on right with no doubt famous writers Eliza Orzeszkowa and Maria Konopnicka amongst the others.

Often, moving figures of biblical characters are added but also those from local folklore and legends, including Pan Twardowski (the sorcerer who sold his soul to the devil) and Lajkonik (the man dressed as a Tartar on a horse prancing around).  The Jasełka (Christmas play) characters of King Herod, Death, the Devil and Krakowiak and Krakowianka (Cracovians) as costumed dolls are displayed in this Szopka so the puppet tradition isn’t quite forgotten.

This year there will be over 20 Szopki set in illuminated cases in the city, in squares and parks, shop windows, hotels and restaurants. From 2 December 2022 until 31 January 2023 you can visit them alll so there is plenty of time to see them if you are in Kraków plus a guided walk on 6 January for the Feast of the Three Kings.   And for home, if you don’t have one and aren’t visiting Kraków, you can buy them online but remember they come at a price as they are all handmade. There really is nothing quite like the Kraków Szopka to brighten up Christmas.

You may wish to read:

Where do your Wigilia (Christmas Eve) dishes come from?
As we gather for our Wigila (Christmas Eve) supper, the dishes we prepare are a mixture of traditions from our families. By repeating these customs, we create memories for future generations...
52 Likes 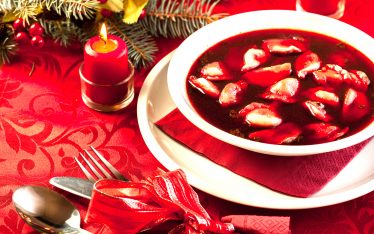 What’s the essence of Wigilia (Christmas Eve)?
As I wish you all Wesołych Świąt and a Happy Christmas in these uncertain times, let's look back at Polish Christmases of the past. Soon we will sit down to...
105 LikesLeave a comment

5 ways to make your Christmas truly Polish
This post is particularly poignant when our Christmases may be different, we may not sing as many carols but we can listen and our opłatek may not be shared with...
160 LikesLeave a comment
We use cookies on our website to give you the most relevant experience by remembering your preferences and repeat visits. By clicking “Accept”, you consent to the use of ALL the cookies.
Cookie settingsACCEPT
Manage consent