Will you be eating Pączki or Faworki for Polish Fat Thursday?

My English childminder carried out a vote amongst her children as to whether they’d like to celebrate Chinese New Year, Pancake Day or Fat Thursday and guess which one was the favourite? What a great, sweet way to share our Polish heritage. Tłusty Czwartek (Fat Thursday) or Pączki (Doughnut) Day as it’s known in the States is coming up. It gives Poles the right to several days of final overindulgence to end the carnival season,  more time than the Anglo-American Pancake day gives you, the day before Lent begins on Ash Wednesday

How many types of pączki (doughnuts) will you have?

Well, depending on whether you make your own or buy them, there is jam (various flavours), śliwkowe powidła (plum conserve), budyń (vanilla custard) or advokat custard, finished with or without icing and sometimes orange rind. There’s also poppyseed, cheese, chocolate or toffee fillings and my favourite konfitura z róży (rose confiture). Each baker has his own special recipes and I for one will be checking all my local Polish shops to get as many different flavours as I can.  And as usual, regions of Poland have their own take on pączki. In Silesia, they are known as Kreple – from the German word Krapfen, earlier also known as blinis or babałuchy.  In the Kaszuby region, Purcle are small pączki filled with plum conserve and sprinkled with icing sugar. In and around Wilno, the celebrations are on Fat Tuesday and they eat blinis with butter and chrusty (faworki). 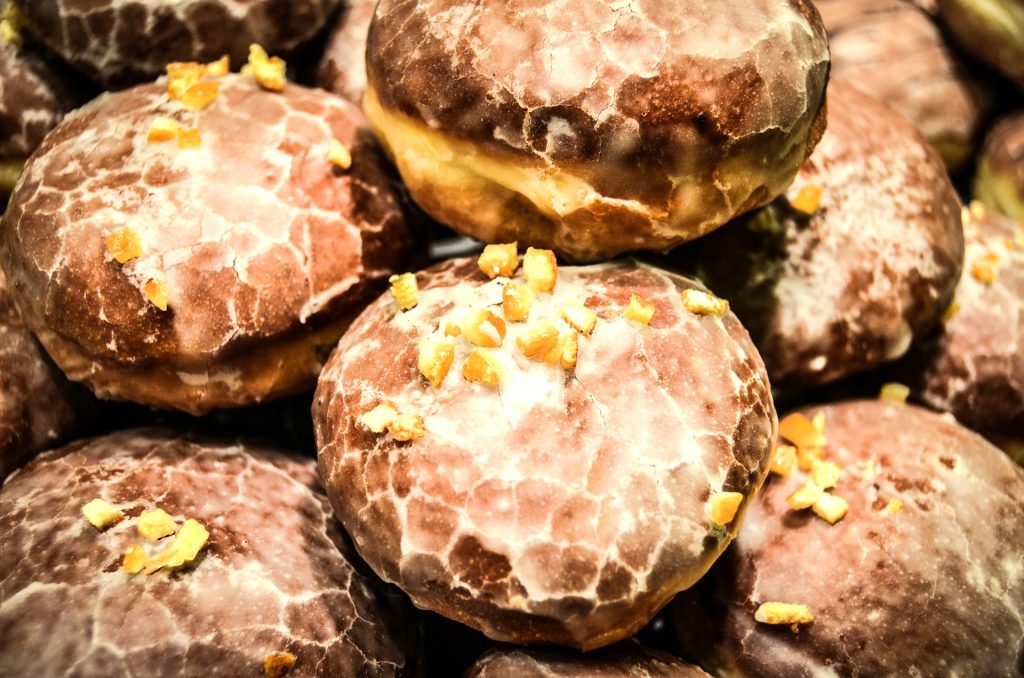 How old is  the tradition?

Pączki making began in the 16th Century to use up any spare lard and fatty food before the beginning of Lent. Some of them would be stuffed with nuts, particularly almonds. It was said that whoever ate one with this surprise filling would have success for their whole lives. Another superstition said that anyone who doesn’t eat a pączek on  Tłusty Czwartek is resigned to a bad year. „Kto w tłusty czwartek nie zje pączków kopy, temu myszy zniszczą pole i będzie miał pustki w stodole” “Who doesn’t eat a doughnut on Fat Thursday will have their field ruined by mice and an empty barn”.

Mikołaj Rej, the first scholar to write using the Polish language, wrote about this dessert and they were definitely served in the court of King August III in the 18th century, written about as: „jednak łakomych ochot sprawiali sobie począwszy od Tłustego Czwartku aż do Wstępnej Środy, ledwo hamując się w swawoli w pierwszy piątek postny”   “they were the most greedy from Fat Thursday to Ash Wednesday, barely breaking their frolics for the Friday fast”.  But when it gets to the following Tuesday, forget pancakes with jam or lemon, this Tuesday is actually all about Herrings or Śledzik. An occasion for tables to groan for the last time under the weight of hefty herrings, other fish and alcohol. Another reason to feast, once full of pączki and other sweet delights.

End of the Carnival

Tłusty Czwartek signifies the beginning of the last few days of the Carnival season. Known also as Zapusty in Poland, a time of great partying, balls, sleigh rides with groups playing music, great merriment and an abundance of all meat based foods („mięsopust”). In the last few days this included dressing up as various characters, not dissimilar to Kolęda and visiting homes in the neighbourhood. In the UK the pinnacle of this year’s carnival was the Polski Bal  in London, an extravagant evening earning tens of thousands for chosen charities. At midnight, thanks to the Polish Bakery in London, the guests were treated to „Pączki o Północy” variously flavoured pączki to keep up their energies for dancing into the morning hours. 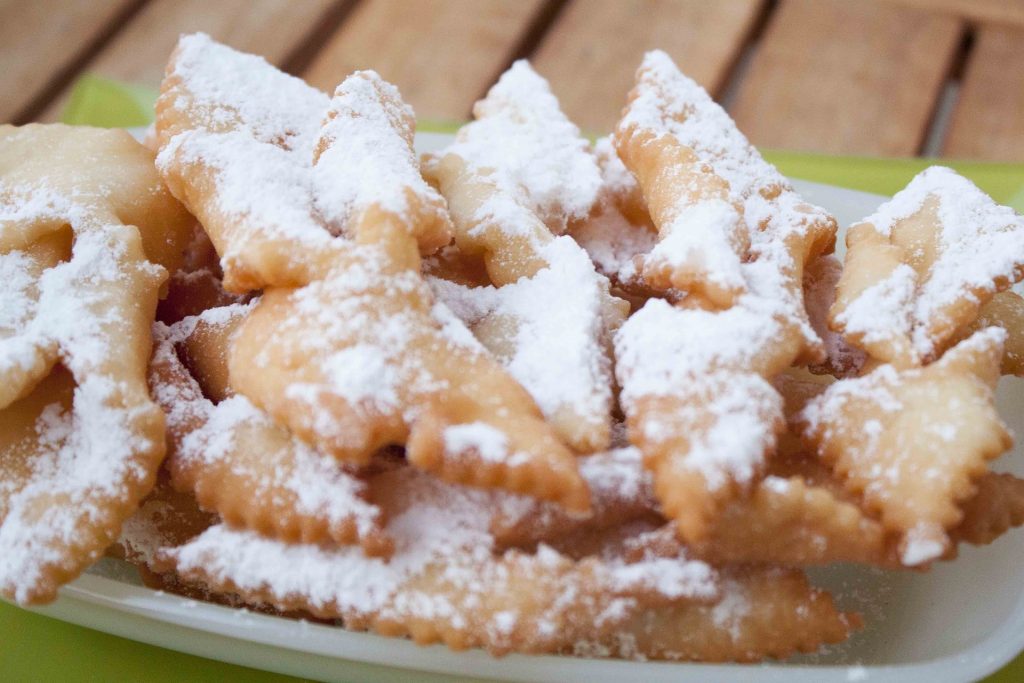 These fragile and delicate cakes originally come from Lithuania and Germany and are also known as  Angel Wings.. The shape resembles a complex bow or ribbon and hence the Polish name, borrowed from French – faveur – narrow ribbon, silk ribbon. Some say they became known as chrusty in the 1930s, perhaps not such  a pretty name but more slavic in origin. Legend has it that faworki were created by accident. A young confectioner threw a thin strip of pączki dough into hot oil. The dough shaped itself into a braid, and after being seasoned with sugar, it turned out to be very tasty.

Although I love pączki, I adore faworki and must admit to preferring them. I’ve never attempted to make pączki though home-made are definitely the best. I do make faworki every so often and here’s the recipe I use from the half century old, Kuchnia Polska: 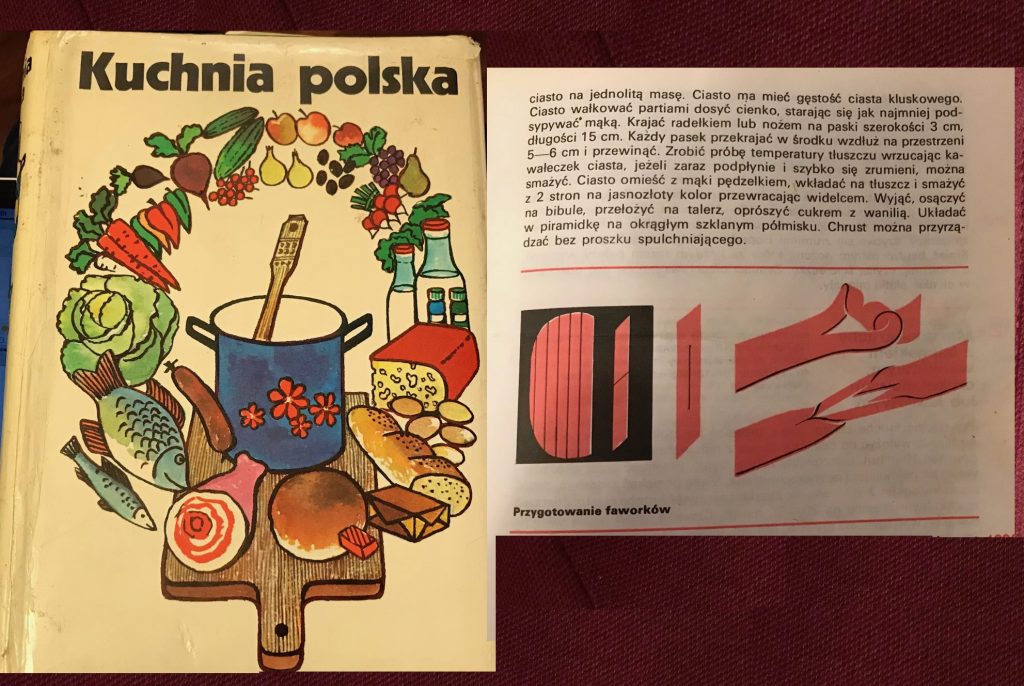 Mix the flour with the cream, make a well in the centre and add the eggs, a pinch of salt and the baking powder. Mix well and then roll it into a ball. Roll out the pastry quite thinly, trying not to use too much flour. Cut with a knife into strips 3cm x 15cm. Make a cut in each strip in the middle, of 5-6cm and turn one end through the cut to make the shape. Check the temperature of the lard throwing in a small piece of pastry, if it starts floating immediately and browns quickly, it’s time to start, Brush any flour off the pastries with a brush and lay into the lard, frying on both sides to a golden colour, turning around with a fork. Take them out, drain first on kitchen paper, transfer to a plate and sprinkle with icing sugar mixed with vanilla sugar.  Lay them in a pyramid shape on a circular glass plate.

Feel at one with other Poles

When youre munching on your homemade or shop bought pączki this year or faworki, don’t forget you’re in good company as beyond the 100 million pączki ate by Poles in Poland on this day (based on an average of  2,5 per person), there’ll be a good proportion of the 20 million Poles around the world joining them.

You’ll be in very good company.

Polish Palms for life and health
With Easter approaching, Palm Sunday for Poles, is as colourful as any feast due to the "palms"- bazie or palemki made from fresh branches of willow with catkins or "kotki" (little...
468 Likes

Polish St Joseph’s Day and breaking of Lent
If for you Lent is already dragging on and worries about coronavirus are getting you down, there's one day coming up when all Lenten obligations are thrown off and weddings,...
331 Likes
We use cookies on our website to give you the most relevant experience by remembering your preferences and repeat visits. By clicking “Accept”, you consent to the use of ALL the cookies.
Cookie settingsACCEPT
Manage consent