Not an iPad in sight! How Polish kids’ camps, kolonie, entertain 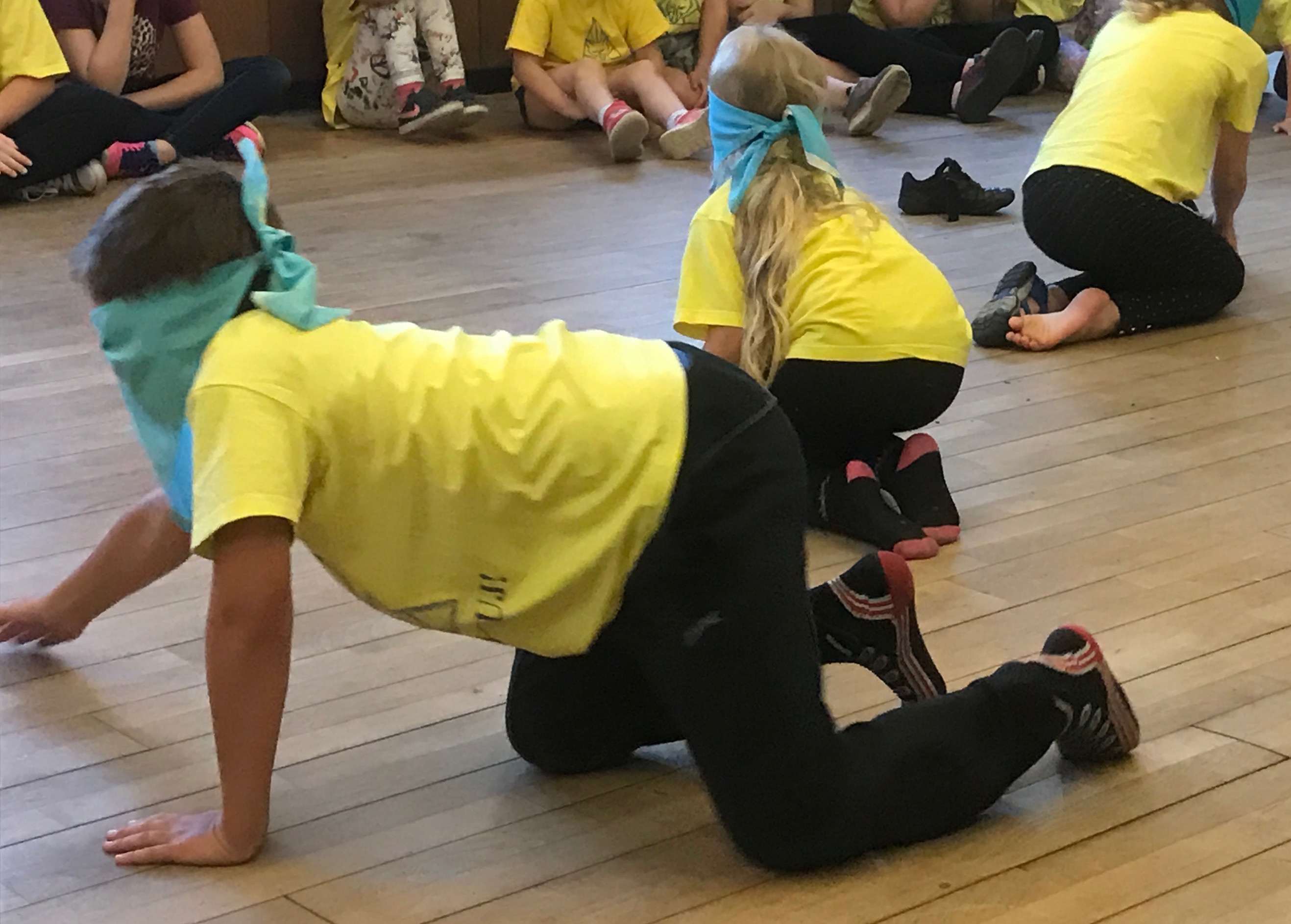 So kolonie zuchowe (Polish brownie and cub camps) have been going on for nearly a century and certainly for over 60 years in the UK, yet the children play many of the same games as in the 1930s or 1950s – and that has to be a good thing in some ways.  No tablets, phones or other devices for two weeks, just fresh air, healthy games, activities, songs and bedtime stories. A fantastic combination.

I am, for the first time in my adult life, spending time on kolonia in the Fenton Polish Scout Centre, Lincolnshire.  You may know I work with harcerki (girl scouts), but never zuchy (brownies and cubs) – it’s just not my strong point.  However, life has conspired to put me in a situation where it made sense to come along to help, mainly in the kitchen and to look after the girls for their afternoon rest. More about that later. 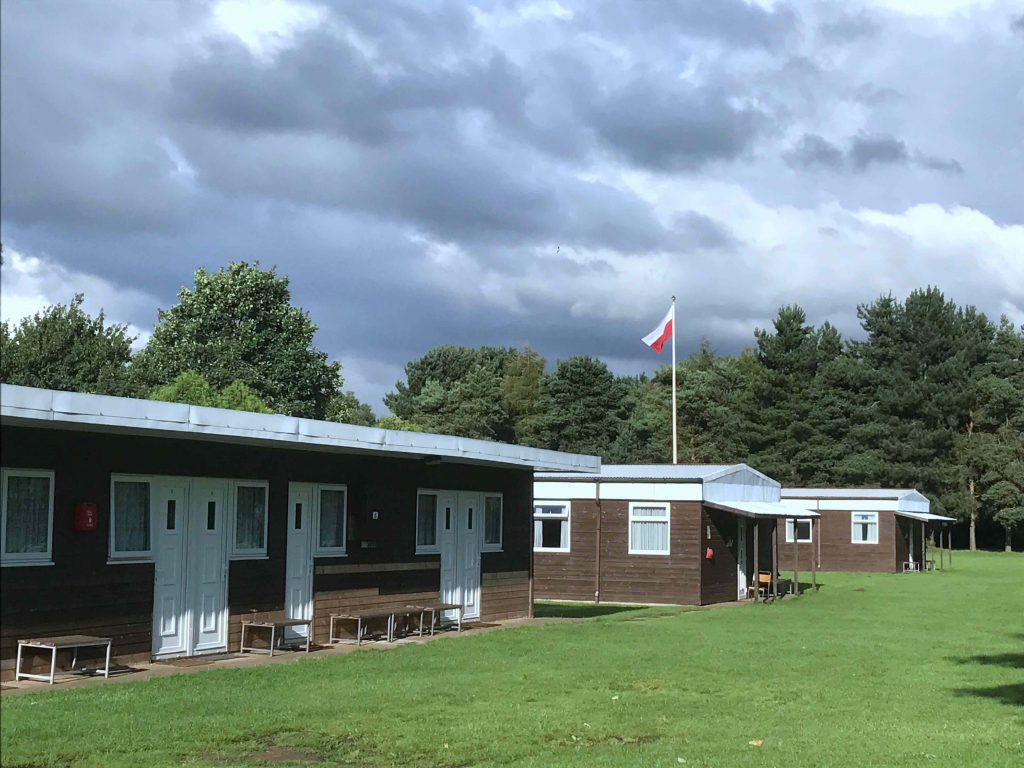 But I wonder what your memories are of kolonie?  They will no doubt be of St Briavels where  the first kolonia was at Prospect Cottage in 1955 or Penrhos since 1964 or even Fenton from 1978. Some were for three weeks. Can you imagine sending your children away for that long?

I remember the girls dormitory in Penrhos, a vast room absolutely jam packed with beds, so many that you only knew the girls in your szóstka (group) and you could barely squeeze in between the beds. The hall for kominki (singsongs), now sadly demolished was a place of great fun in the evenings, full of expectation if you’d be chosen for a dance, or singled out for „mam chusteczkę haftowaną…”.  The dining hall was a vast space, and the kitchen a workhouse of activity, full of mothers cooking for what seemed all day long, plumes of steam rising from huge pans. 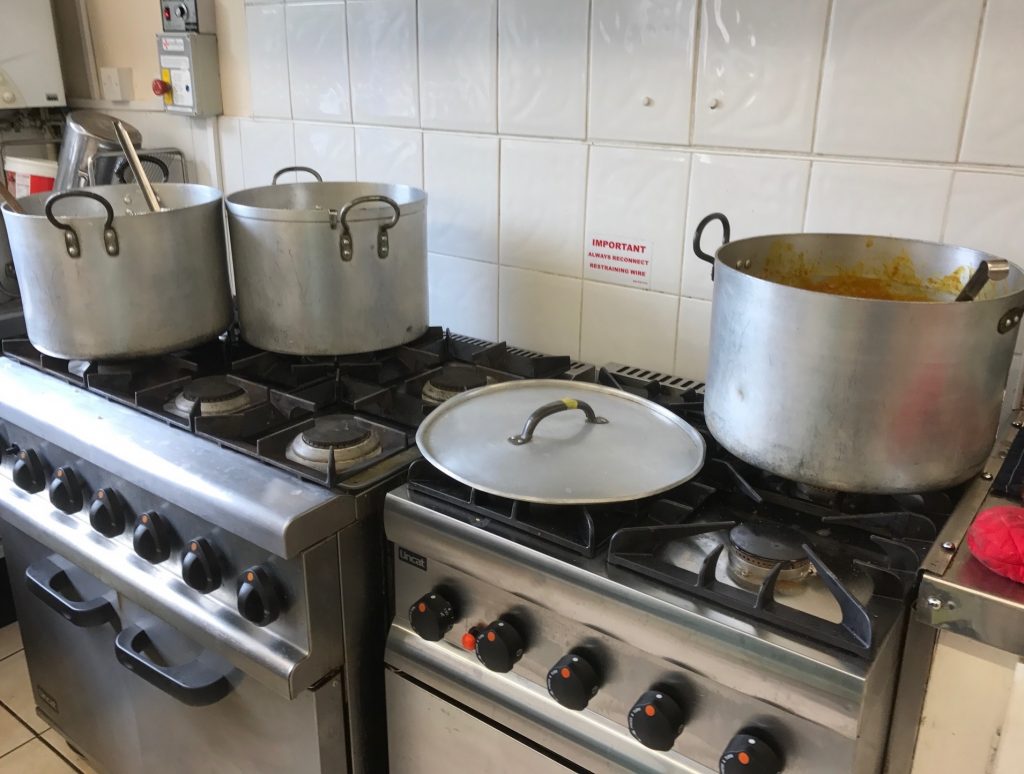 The great vats of delicious hot pasta with butter and cheese crumbled on top seemed to be our daily kolacja, but we were probably fed other things, I just can’t remember.

Pani Irena Borzyszkowska (died 2011) ruled those kolonie strictly but I always remember her smiling face with happy eyes and looking oh, so smart in her beige green uniform. Others will remember Pani Irena Antonik (died 2016) who ran Gdynia and Kaszuby kolonie in Penrhos, but I don’t know who ran kolonie for London, the South or the Midlands.

For those who have never been, it is a two week camp for Polish cubs and brownies aged 7 – 11 with themes ranging from Indians, Krakowiacy (Cracovians), Janosik or Doktor Kto (Doctor Who) to the world of the sea and beyond. The children learn about their theme through handicrafts, outdoor games, songs, trips out, often to the beach and prepare a show for the parents’  visit on the middle Sunday. This year we have Piotruś Pan (Peter Pan) and the children are flying to new lands, discovering pirates chests and making Peter Pan hats. 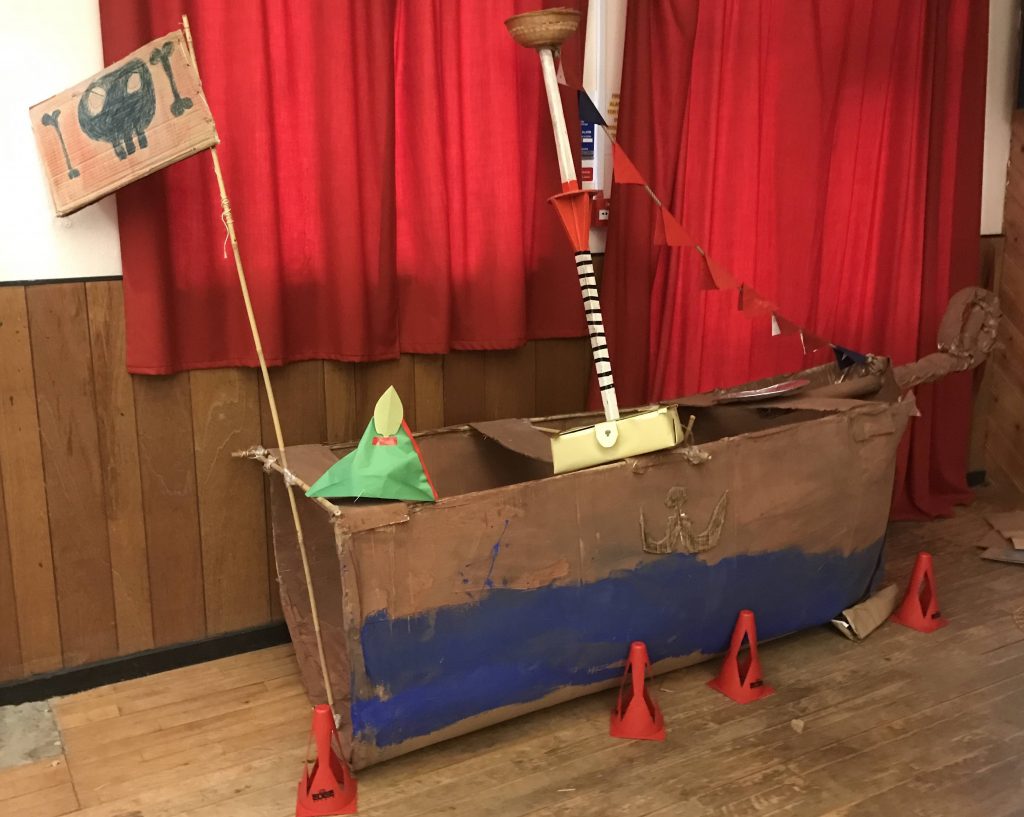 The activities develop bravery, dexterity, truthfulness and resourcefulness. There’s not much time for homesickness as they are always active, apart from a half hour after lunch, where they have 15 minutes of total bed rest and 15 minutes of reading a book or drawing. This is my task this year, to keep the girls quiet and not having a daughter, I can’t quite believe how cheeky they can be! My first day here, there were hands up to go to the toilet, legs in the air to defy my order to lay down completely and arms sneakily pulling out sweets, books and toys from bedside cabinets. I guess they didn’t know me but I’m doing better as the week goes on and there is now total silence for the first 15 minutes. 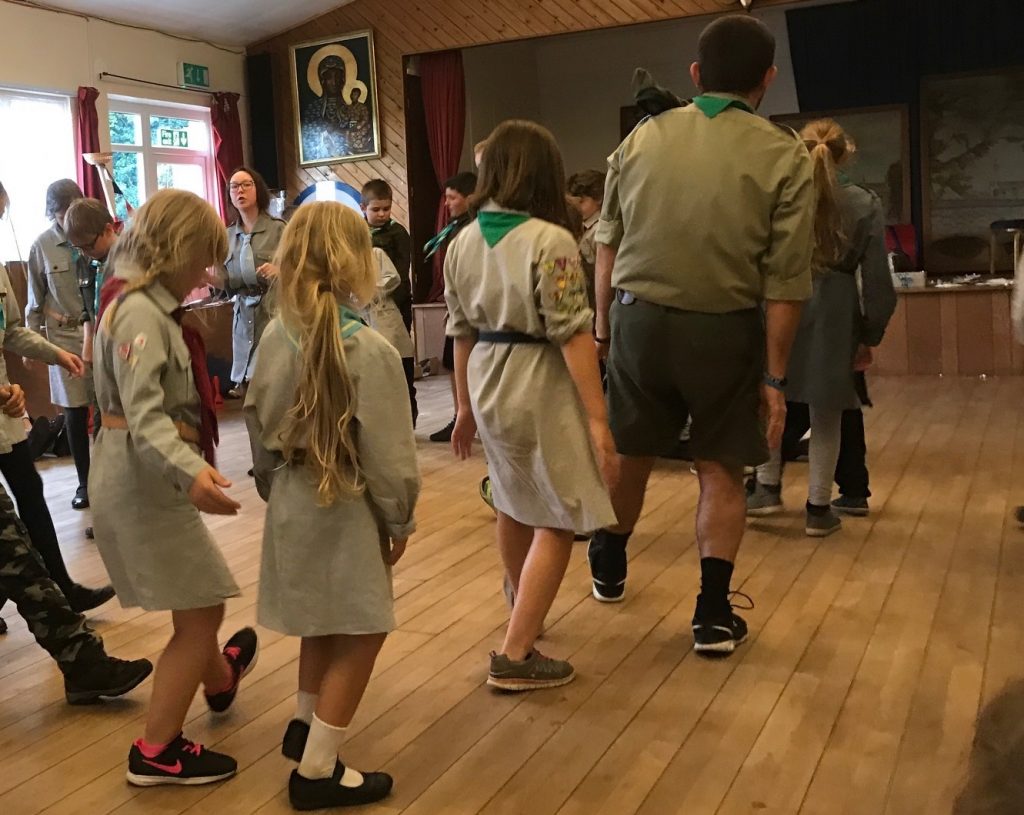 The day ends with a kominek (singsong) with songs, games and dances and a story to finish off. Tamara who runs the kolonia says:  „Children adore stories, and when they are all gathered round, they listen with bated breath to see what happens next, people just don’t tell stories to children enough these days”. 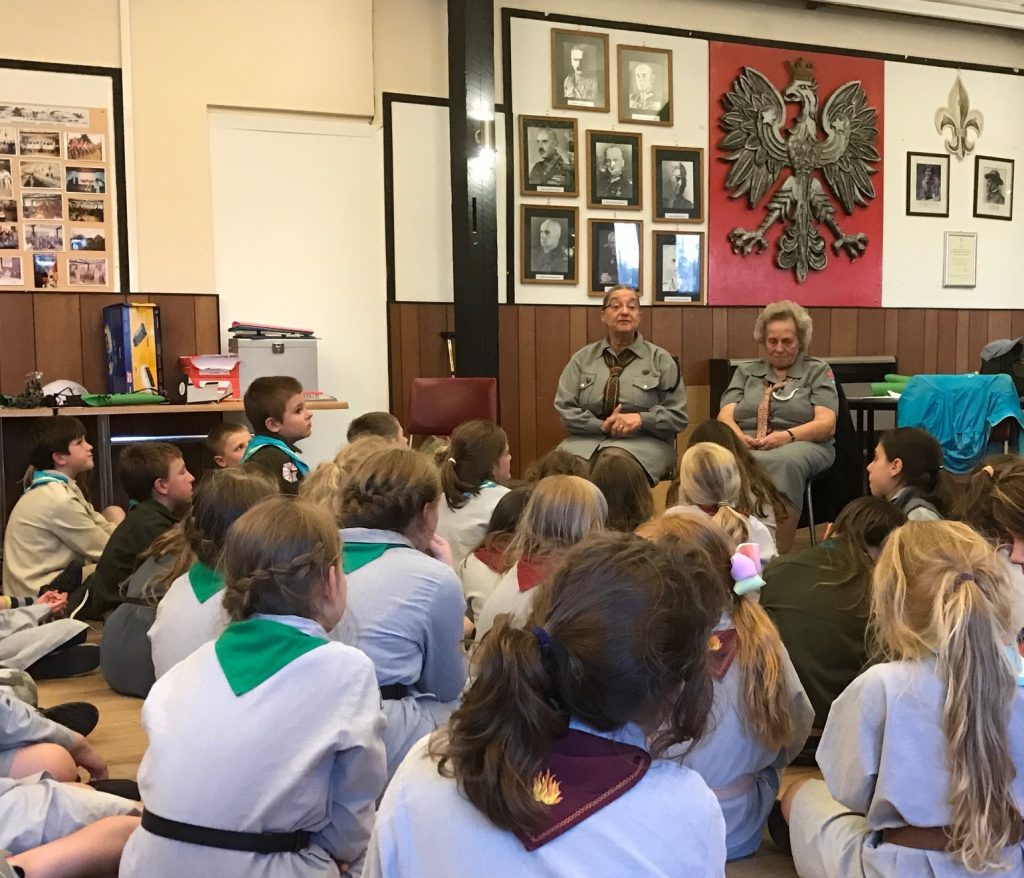 They could be a group of children from the 1930s, especially in their uniforms, but this kind of entertainment doesn’t have a sell by date. I don’t know if all zuchy finish with the traditional lullaby:

“Sun’s setting now with its golden rays, next the stars of night will light up the sky, goodnight for now”

But I remember it from my Penrhos kolonie and we still sing it here in Fenton, helped along by the magnificent Zygmunt on accordion. 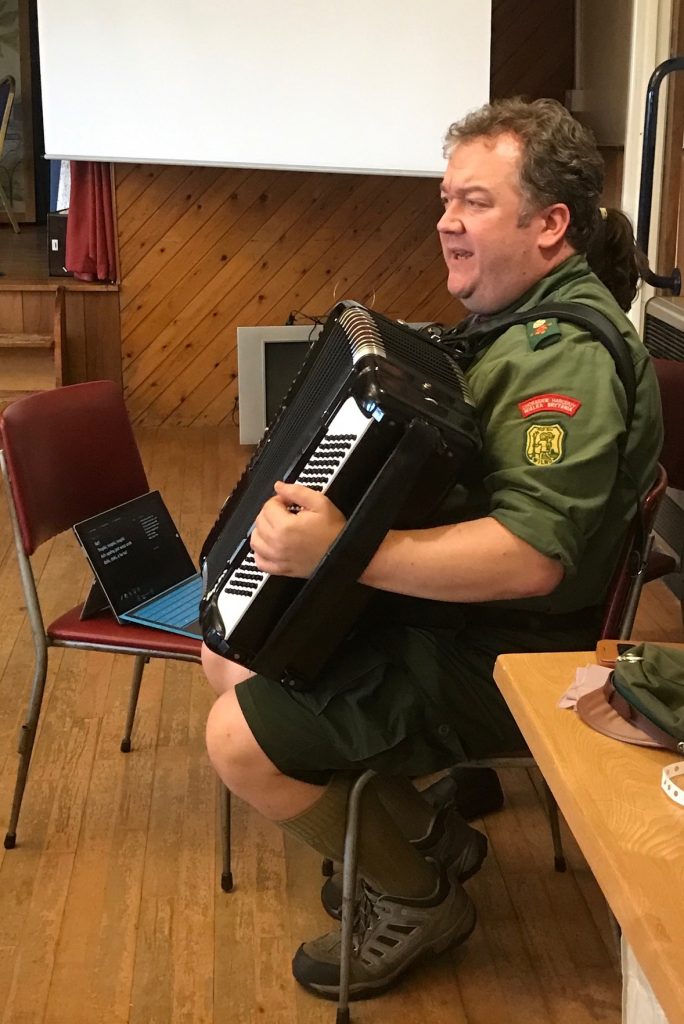 We also sing the lullaby „Był‚ sobie król” (“there once was a king”) where the dog eats the King, the cat eats the Page and the mouse eats the Princess, but it turns out they’re all made of sugar!  Written by Janina Porazińska, a writer of children’s stories and songs in the 1920s and 30s, she also wrote „Z popielnika na Wojtusia, iskiereczka mruga” (“sparks wink from the fire at Wojtuś”) which is always sung at the beginning of kominek.

So when you are wondering how to entertain your children this summer, just think of simple things, handicrafts, group games, even „Kubuś gdzie Ty” (Kubuś where are you) and always, always a bedtime story.  It’s a winning combination and one that constantly delights children every year.

Polish Resettlement Camps on British soil link us all
In our search to find out our Polish families' lives both in Poland and in exile, one key element for the Polish soldiers, for their families and also displaced people...
248 Likes
We use cookies on our website to give you the most relevant experience by remembering your preferences and repeat visits. By clicking “Accept”, you consent to the use of ALL the cookies.
Cookie settingsACCEPT
Manage consent