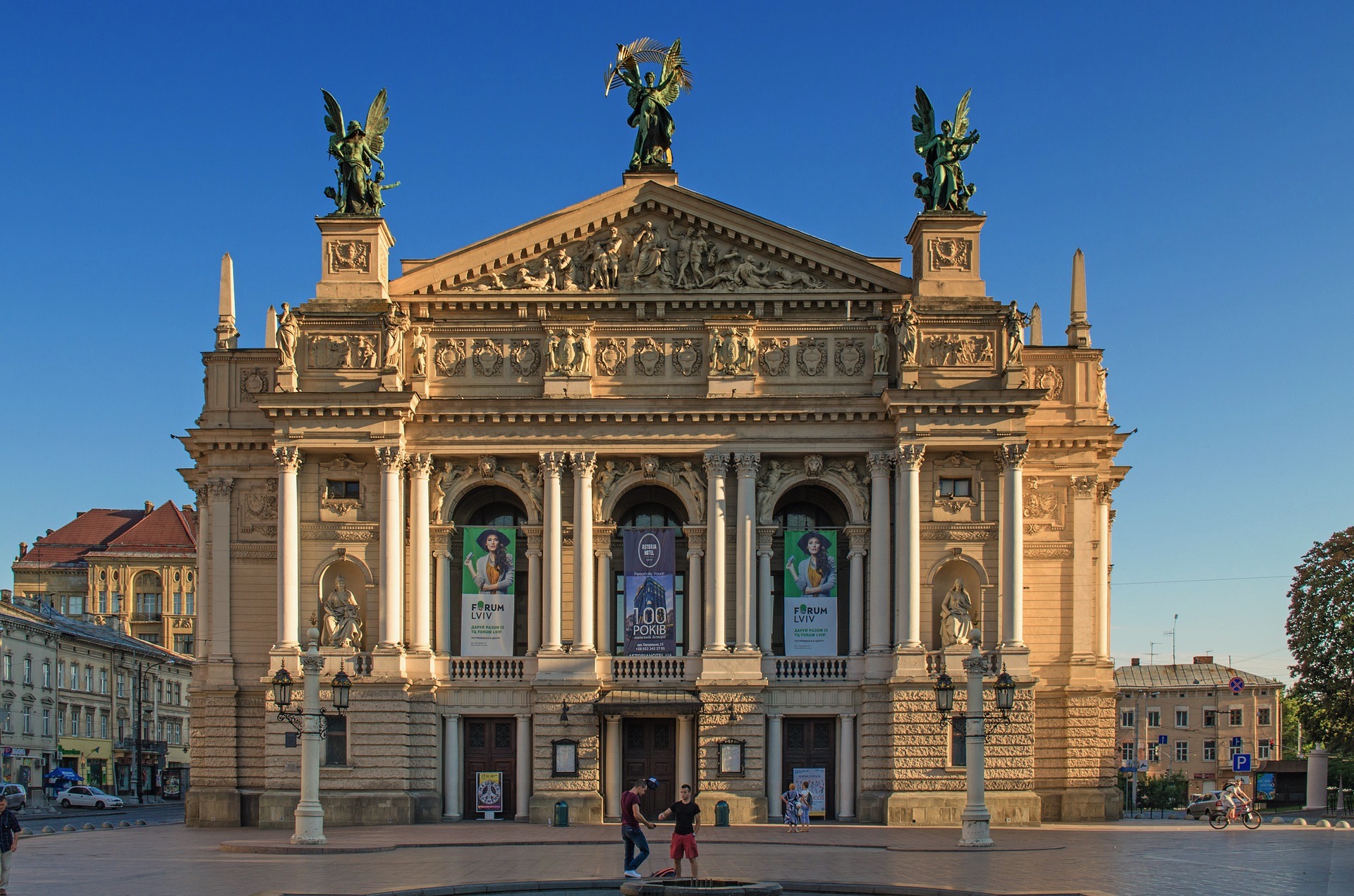 The plight of people caught up in war in our lifetime is so difficult to watch, given what our parents and grandparents experienced. Poles and Ukrainians have a difficult history especially in the west of Ukraine, yet Poland has swiftly become a place of refuge for over two million Ukrainians: many Poles have been saying “No one helped us in 1939 when we were fleeing terror, so we are helping now.”

Seeing Lviv (Lwów) in the news each night takes me back nearly 25 years when I toured this beautiful area of Western Ukraine, only seven years after Ukrainian independence. That it is again a battleground is beyond tragedy. 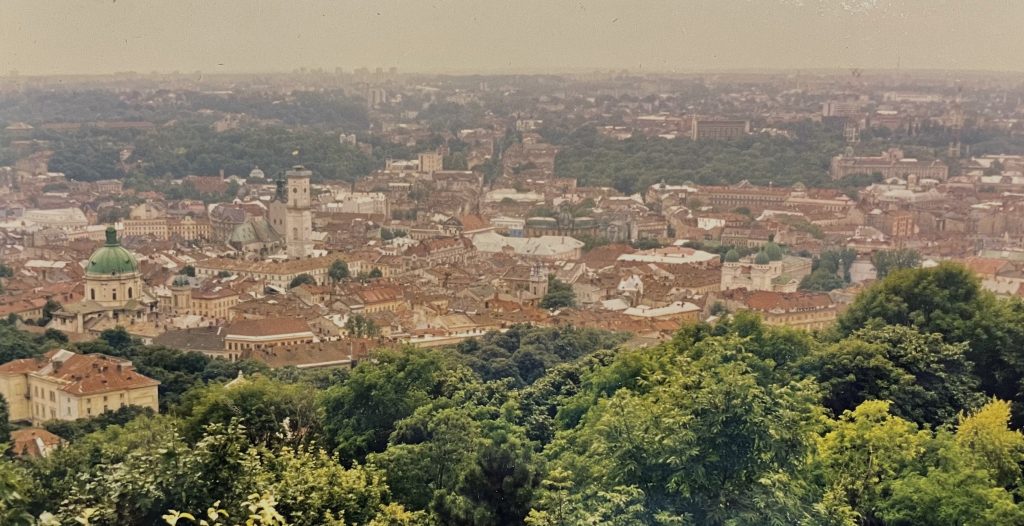 Panorama of Lviv from Castle Hill 1998

Back in 1998, the country was struggling to throw off its shackles as a former Soviet State. As we left behind the border of a rapidly modernising Poland, we felt we were travelling back to the 1950s or even earlier.

The four of us from the UK and two friends from Poland drove in our battered van, arriving in the empty streets of Lviv (Lwów) at dawn. The streets were without colour, without street lighting, like a scene from an ancient photograph. A city described to me as a child as so vibrant and musical was now a drab and grimy reality. The only person we saw was a lonely babushka, sweeping outside her house.

My head swirled with the stories I’d heard about Lviv, the songs such as “Tylko we Lwowie” (Only in Lviv) written in pre-war Polish dialect by geniuses Henryk Wars and Emmanuel Schlechter. Emmanuel a Jewish composer, died in the Lviv Ghetto in 1943.

Most monuments and landmarks were in a state of total neglect, a sign of complete indifference, or worse, on the part of the Soviet authorities. So much was broken and dirty: pot-holed roads, crumbling buildings, smashed and dirt-filled fountains: the water supply for residents was so intermittent that the Poles we stayed with left all their taps on day and night with buckets at the ready beneath, in the hope of a trickle, enough to wash and cook with and to flush the toilet each day. One never knew when the water would come, nor for how many minutes.

Devastation of the Lviv Eaglet’s cemetery 1998

The worst sight was the Eaglet’s Cemetery (Cmentarz Orląt Lwowskich), part of the Lychakiv (Łyczakowski) cemetery, completed in 1924 to honour the 3000 Polish soldiers and teenage volunteers killed in 1920 fighting the Bolsheviks and in 1918 the Ukrainians, for Lviv. I saw the rubble from a distance, comparing it in my mind with pre-war illustrations I had seen of this beautiful art deco cemetery. The catacombs had been desecrated, the tombs had been razed to the ground. 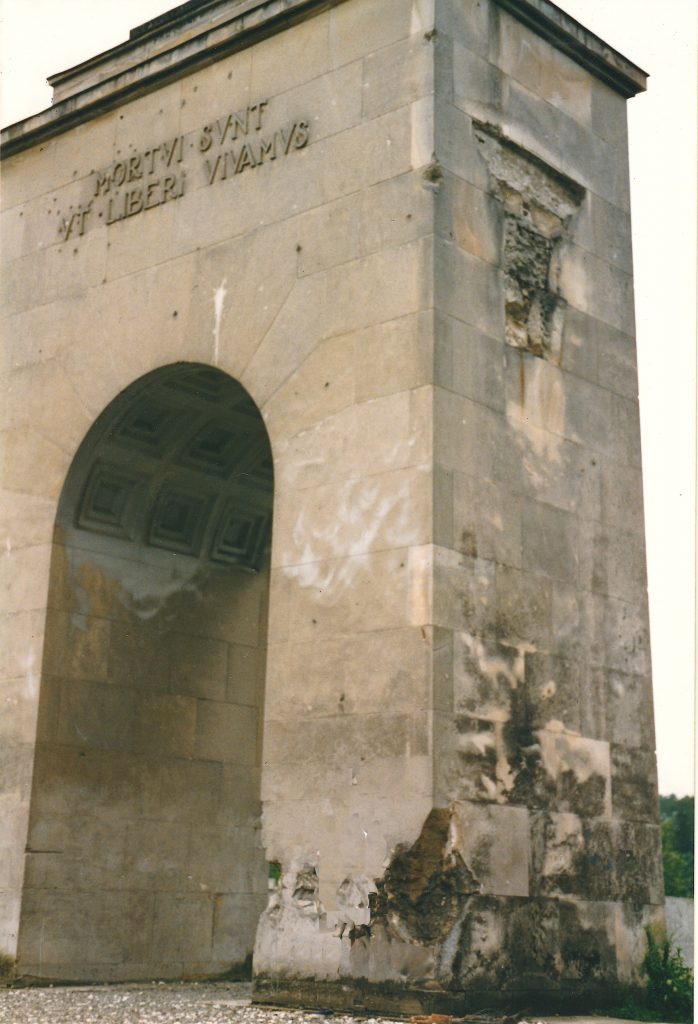 Our guide Pan Kazimierz described a Soviet attempt to pull down the triumphal arch, which featured the words “They died so we might live free” and which had once formed the entrance to the site. The Soviets had used a tank and massive chains in their attempt at destruction: the damage remains to this day as testament of this vandalism, in the newly restored cemetery.

The Eaglets Cemetery Lviv after restoration, 2002 CC by 3.0 Gryffindor

Lviv, also now restored as a modern European city, was named in 1272 after the ruler Daniel’s son Leo. It was part of the Polish-Lithuanian Commonwealth until the late 18th century and then the Austro-Hungarian Empire. It belonged to Poland between the two World Wars before being taken over by the Soviet Union. Despite the Volhynia Massacre that occurred in this territory in 1943, the Polish Solidarity movement in 1989 supported the aspirations of the national democratic forces of Ukraine and Poland was the first nation to recognise Ukraine’s independence in 1991.

We travelled on, through Zadwirja (Zadwórze) where 300 young Polish Eaglets (Orlęta) had died to the last man standing, defending the area from the Bolsheviks in 1920, to the Pochayiv (Poczajów) monastery complex often likened to the Polish Częstochowa. Belonging to the Ukrainian Orthodox Church, it had remained open during Soviet times though subject to regular raids and the monks were monitored.

Finally to Kremenets (Krzemieniec) where my friend’s mother and sisters had attended the much-lauded school in the centre of the town. At its heart, the church of St Ignatius Loyola and Stanisław Kostka built in 1753 by Jesuit architect Paweł Giżycki. 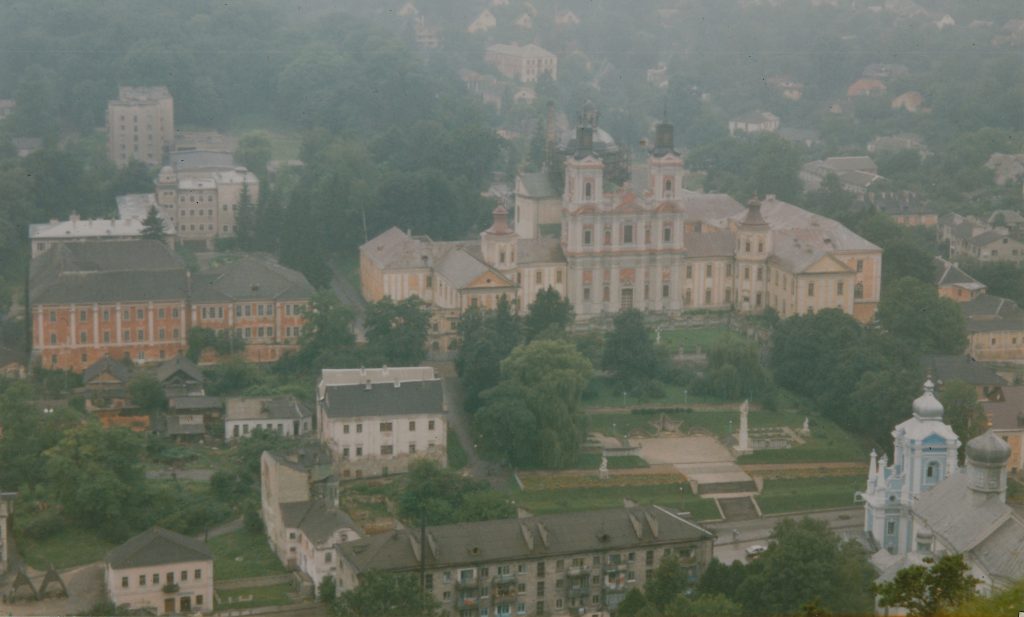 Established in 1803 by Polish Enlightenment figures: historian Tadeusz Czacki and Hugo Kołątaj a reformer and educationalist, by 1939 it included three kindergartens, an elementary school, an agricultural secondary school, a teacher’s college, two community colleges, and a library. In the Soviet era the buildings were used as a gymnasium and furniture store but once again, renovated, hold a primary, middle school and Orthodox church. 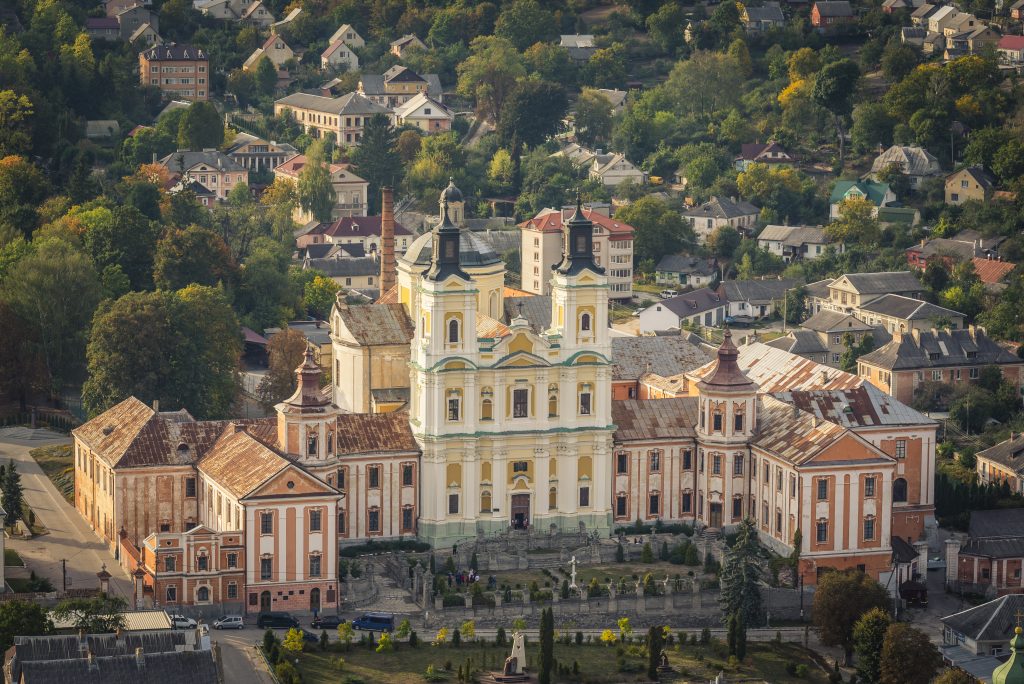 These photos were taken from the castle on Bona Hill named after Queen Bona Sforza, wife of King Zygmunt Stary (the Old), who rebuilt the castle in renaissance style and gave the town Magdeburg and trade privileges.

Many Polish families lived for centuries in Western Ukraine and owned estates including the Branicki and the Potocki families.  I know so many friends scattered around the world whose families came from these lands. To give you a flavour of its multi-ethnic history, Kremenets was the birthplace of the Polish poet Juliusz Słowacki, Isaac Stern the Jewish American violinist and Ulas Samczuk the Ukrainian writer, publicist and journalist. 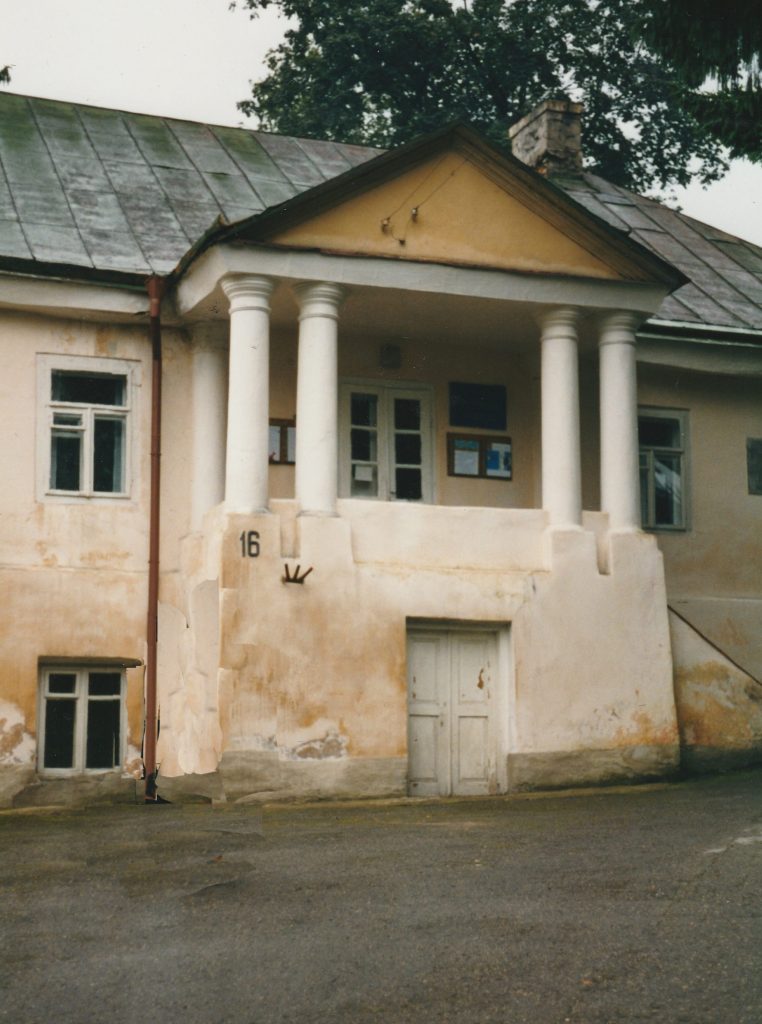 “There stands the mountain, christened in the name of Bona. Greater than the others. ruling the city with shadow; the old, gloomy castle holds his forehead, Does it take different shapes? clouds broken by a maelstrom?” (Julisz Słowacki) 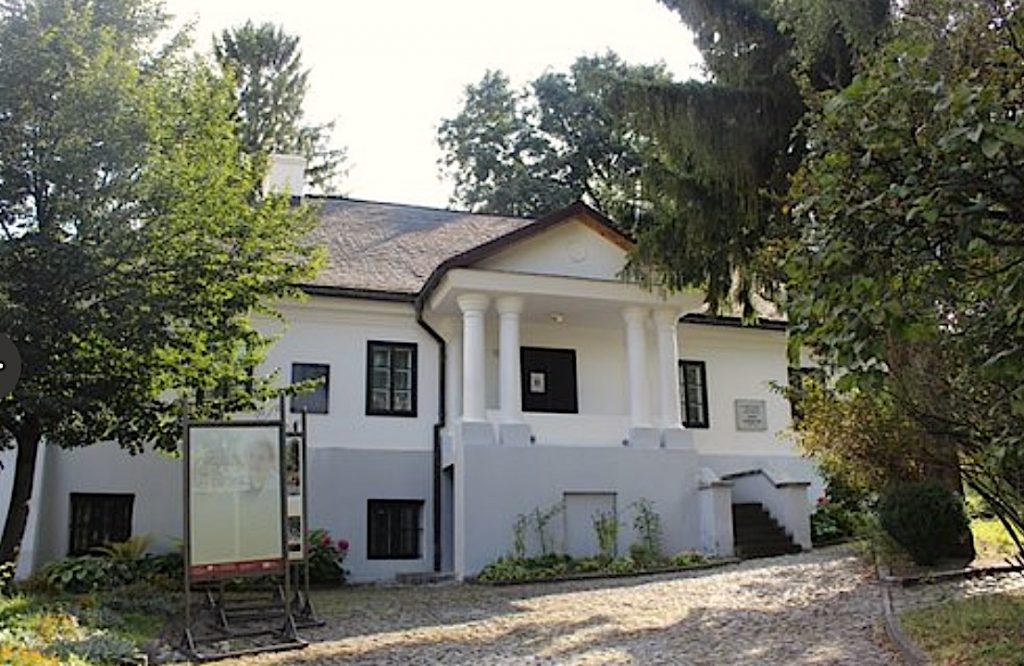 This region has certainly had its share of turmoil. Olesko (Oleśko) Castle, the birthplace of King Jan III Sobieski was born, was another of our stops. The family crests of the families Sas, Topur, Herbert and Korczak are above the entrance. It was a surprise to recognise my mother’s family crest among them. 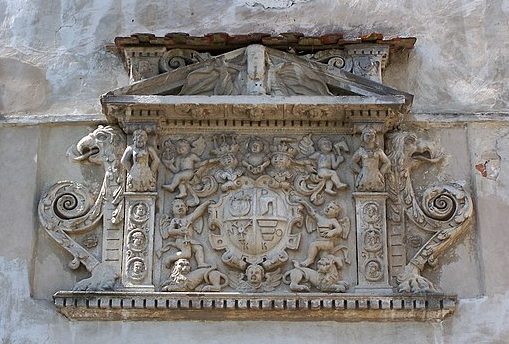 Nearby was the ruined palace of Pidhirtsi (Podhorce), known as the local Versailles and designed for Grand Hetman Stanisław Koniecpolski by Italian Andrea dell’Aqua as a palazzo in fortezza, a palace with defensive features. Owned by the Sobieski family in the second half of the 17th century it was sold to the Rzewuski family.  Juliusz Słowacki’s father was born here, his father managing the estate in the late 18th century. 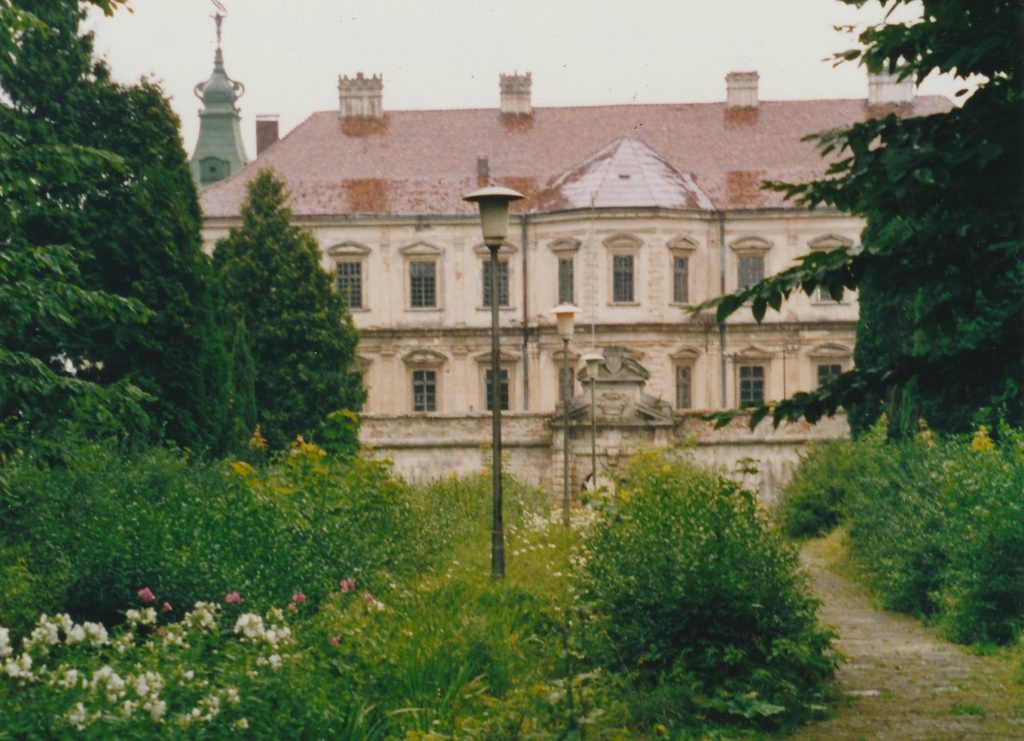 On a rainy, misty day we walked through the entrance of this Palace, half hidden by the now wilderness of the former gardens.

Into empty halls with remnants of marble framing, but littered with old x-rays and glass syringes. It had been ransacked and looted in World War I by the Russians, partly recovered by the Sanguszko family and in Soviet times used as a sanatorium for tuberculosis patients. We walked pensively through the halls wonderfully lit by tall windows until we danced a polka on the dusty wooden floors humming the melody so that the palace would once again hear laughter and jollity. 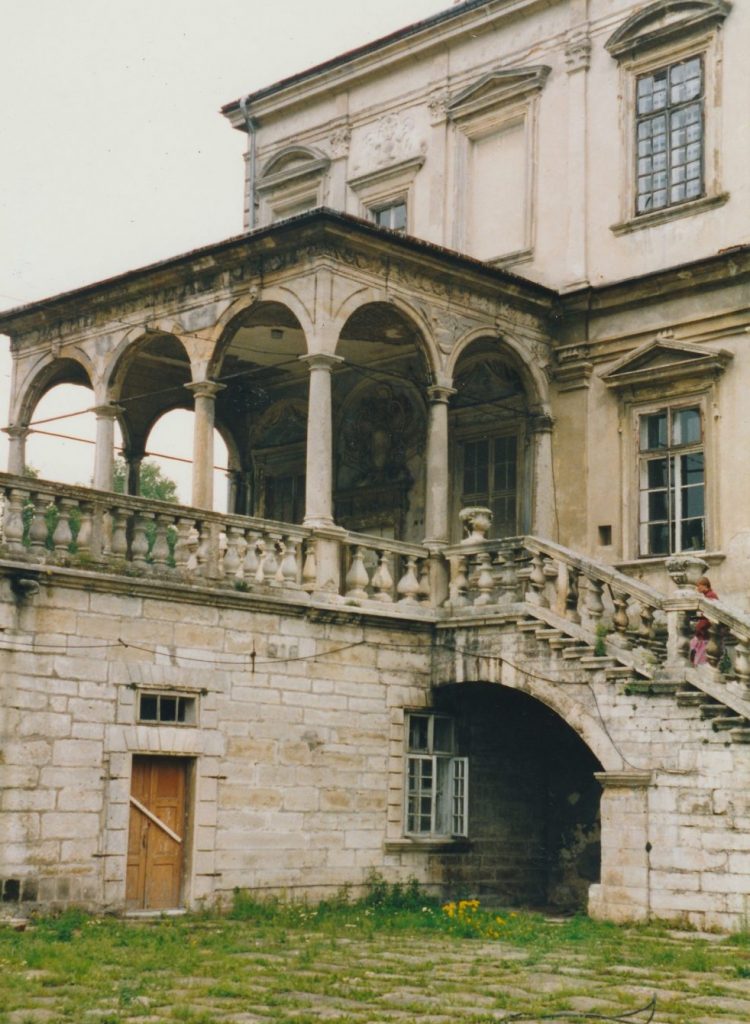 We imagined muslin dresses, balls, the horses trotting into the courtyard with carriages full of those about to party. It was an enchanted place and we wanted to remember every corner, every hall, so achingly sad that it was abandoned and we could just wander through it. 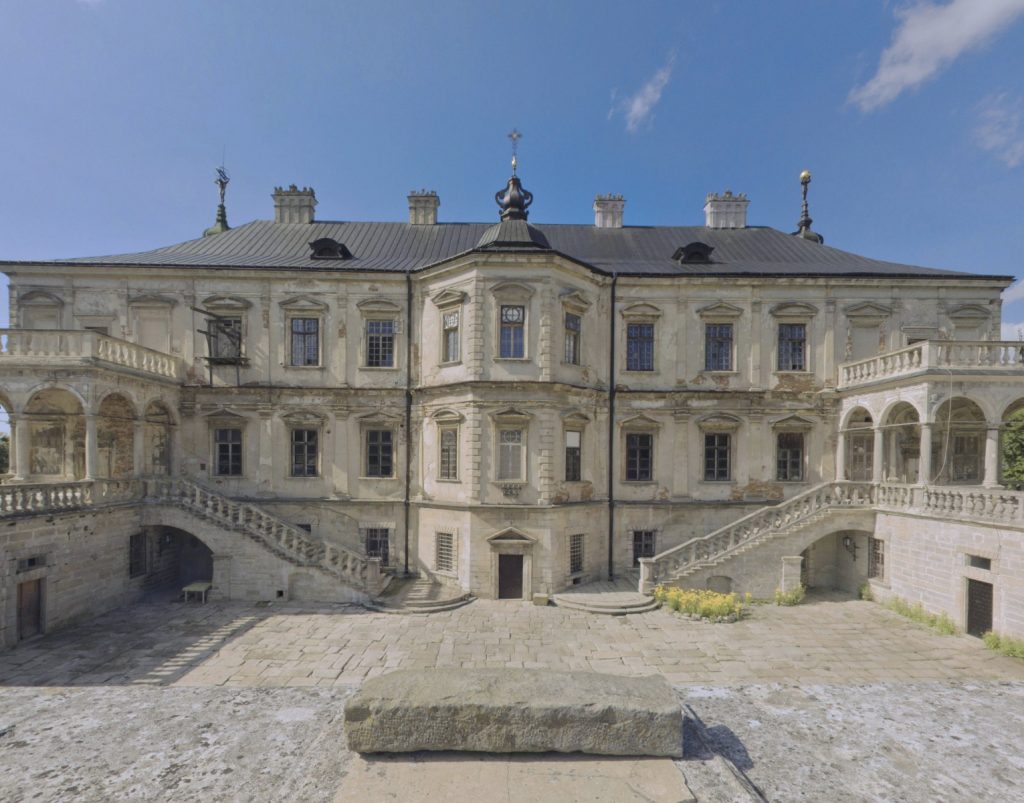 The Palace, once considered as a possible Presidential Palace post 1991 is now a branch of the Lviv National Art Gallery but is listed at World Monuments Watch as a monument threatened with destruction. Some restoration work has begun but it is not enough so many years later.

Ukraine’s history has been so very tragic yet people have shown a fierce resistance and made great strides in the last 30 years of independence.  This beautiful land after so much turbulence deserves to be preserved in peace. I hope one day to go back to a once again newly restored country.

A Polish/Scottish tale of Bonnie Prince Charlie and three Clementines
As the winds howl and the rain lashes against our Galloway steading (farm building) in south-west Scotland, I'd like to share with you a tale of three ladies. Their stories...
292 Likes