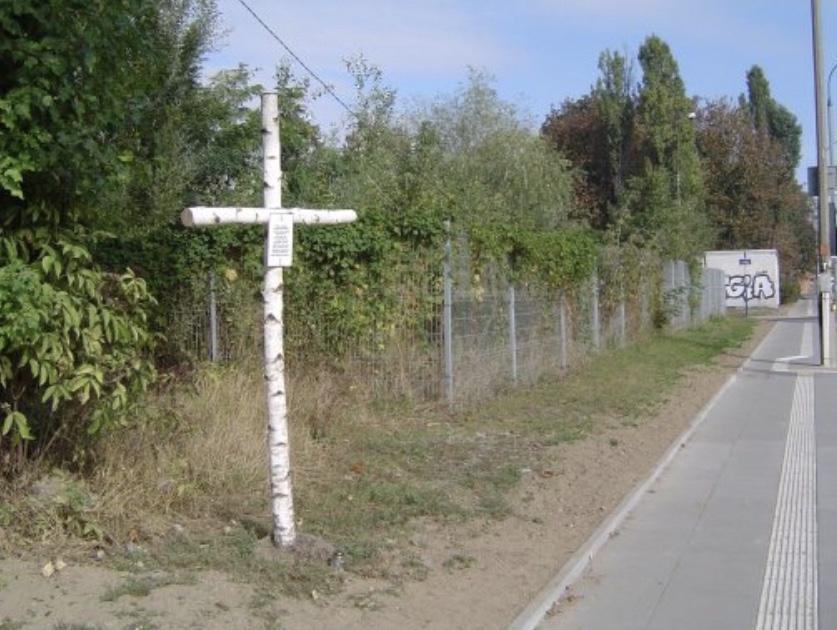 I first saw the sky high grey concrete communist blocks in the district of Wola to the west of Warszawa’s centre as a child. My second aunt and uncle lived there, having moved from the east of Poland in the 60’s. I accepted the landscape for what it was, not  guessing that the ghosts of the past lived on and the local churches we visited hid both the horrific past of the Powstanie Warszawskie (Warsaw Uprising) and a miraculous rebirth. Later on, I began to learn about this cataclysmic event in August 1944. 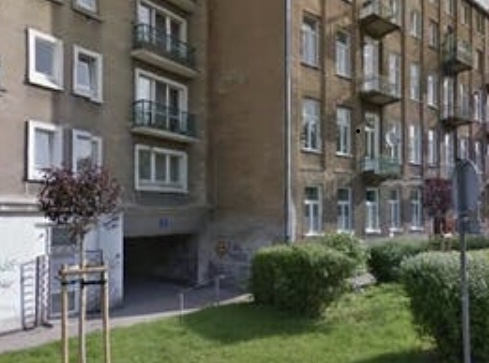 How so little is written of the several days at the beginning of August 1944 during which the German SS and police killed 40,000 to 60,000 people in this district, I cannot understand. It must be the largest civilian massacre in Europe’s history. Those killed weren’t just the people of the Armja Krajowa (AK, or Home Army), the resistance, rising up against  the German oppressors on 1 August 1944. This was retribution on unarmed civilians, women, children, nurses, doctors and their patients.

It began with random violence and shootings, then hundreds of  civilians were used as shields for German tanks against the Uprising soldiers. It  ended with planned mass murder on the 5th and 6th August, ordered by Hitler himself and enacted by SS General Heinz Reinefarth, who was never brought to trial. Warsaw was to be obliterated to the ground and all its inhabitants murdered.

The massacres took place in yards, squares and streets where people were randomly shot, or machine gunned down, burnt in their houses, with grenades and even a tank cannon. You can read more about the horrors in this article by the Polish Press Agency. (Click here).  On my first visit to Warszawa as a child, I had no idea that near my family’s flat, I walked on the roads defended by the batalion Parasol, particularly  Pałac Michlera on ul. Wolska nr.40,  about which I later learnt in the song “Pałacyk Michla”. 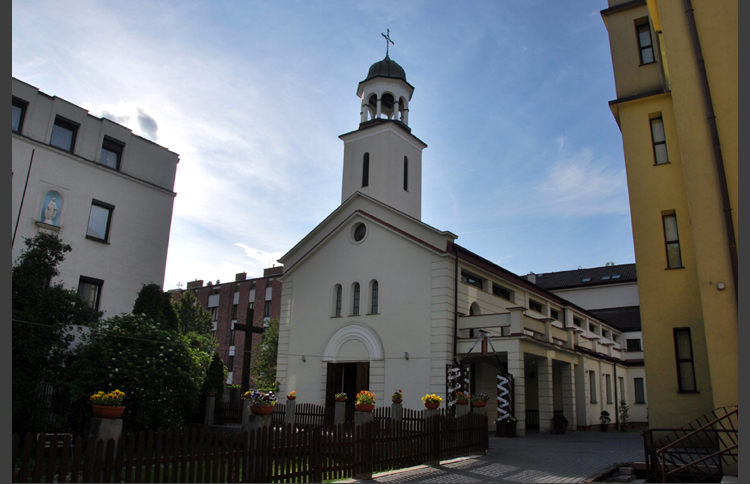 My family’s local church on Ul. Żytnia began life as the chapel to the Siostry Miłosierdzia Bożego (Sisters of Mercy). Later the famous Sr. Faustyna lived there between 1925 and 1933. On 2 August 1944, the second day of the Powstanie, it was given over to the “Parasol” batallion after they attended mass there. Unfortunately the German troops recaptured it on 9 August. The nuns and those hiding in the church were sent to a concentration camp. The building along with the whole district was set fire to, as the Germans attempted to drive a wedge along the main Ulica Wolska into Śródmieście (centre) which was fiercely held by the AK for a total of 63 days.

Thirty years later Wojciech Czarniecki, a priest only recently deceased and greatly mourned, began to rebuild a parish around this church, first clearing the trees growing in its nave. My uncle helped with the electrics, often working only at night to avoid detection.  The Communist authorities were reluctant to allow another church to be rebuilt, which  complicated the work, yet the local residents persevered and it was finally reopened in 1980 becoming a hotbed of support for the Solidarity movement. 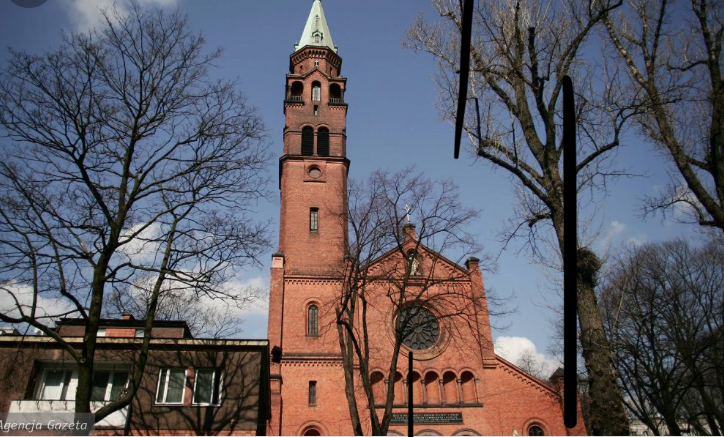 Their other local church,  Świętego Augusta (St Augustine’s) in the north of Wola on ul. Nowolipki became a symbol of hope after the fall of the Uprising. After 1939 it was incorporated into the ghetto imposed upon Polish Jews and was first used as a warehouse for property looted from them, and then as a stable.

The priests – father Garncarek was murdered in December 1943, and Father Więkowicz  was arrested for helping Jews, dying not long after in the Gross Rosen concentration camp. The church served the German troops as an observation point and a machine gun nest, giving them a great advantage over the Polish Home Army. On August 5, 1944, it was damaged by shots from soldiers of the “Zośka” battalion and then partly burnt as the Germans ordered all remaining civilians out of  the ruins of Warsaw. 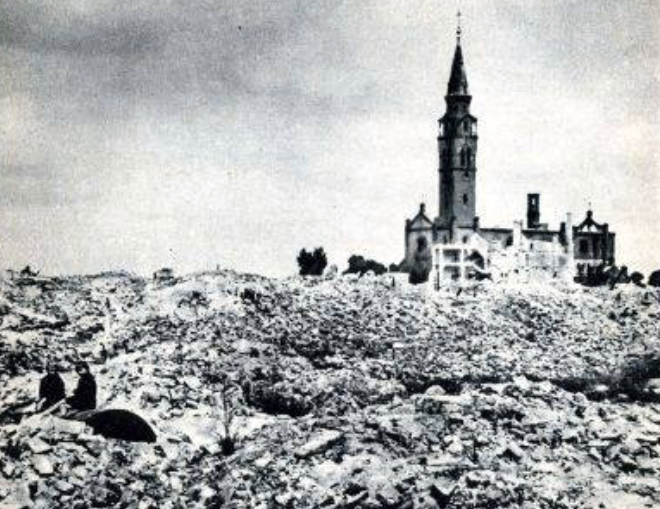 St Augustine’s became a stark reminder of the Wola massacre, being one of very few buildings left after the German annihilation. Rebuilding in the 1950’s was carried out mainly by outsiders. Only 20% of Warsaw’s population returned after 1945. 200,000 had perished, 800,000 had been expelled and had nothing to return to and over 85% of the city had been razed to the ground.

In October 1959 crowds of people claimed to have seen the Virgin Mary appearing on the tower of this church against its golden dome. The Communist Authorities insisted the dome should be painted black, a task that was subsequently accomplished, though with mysterious difficulties. It remained black for many years with another sighting  in 1970 and the dome is now gold again. These weren’t the only significant churches in Wola used  by the Germans, some were used to keep people waiting to be expelled, others for executing civilians.

A monument for all?

Although many tens of street memorials were erected on walls in Wola by its new residents after the war, Communist authorities took down any with a religious character. The ashes of the thousands killed and burnt in Wola were taken to Powązki Cemetery and in 1973 a statue to denote the suffering was erected over them. 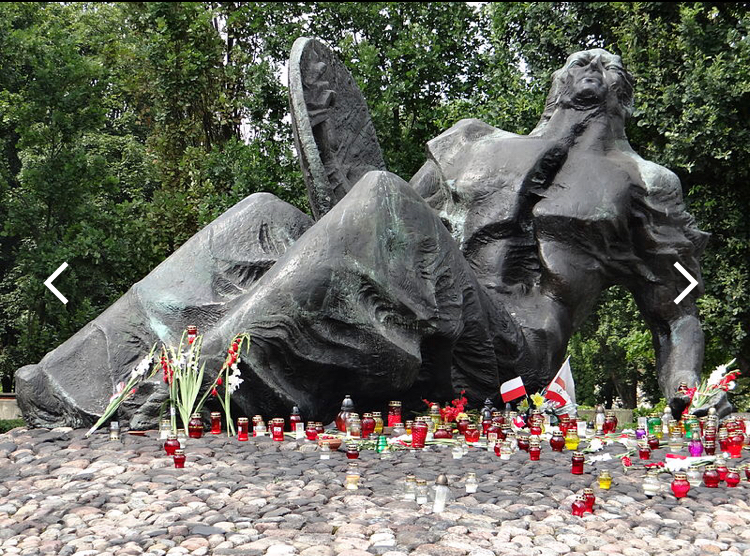 A new monument was unveiled in 2004 on the 60th anniversary of the Uprising , between Leszno Street and Aleja Solidarności,  now a main thoroughfare through Wola. It lists all the places where Warszawa residents were murdered. 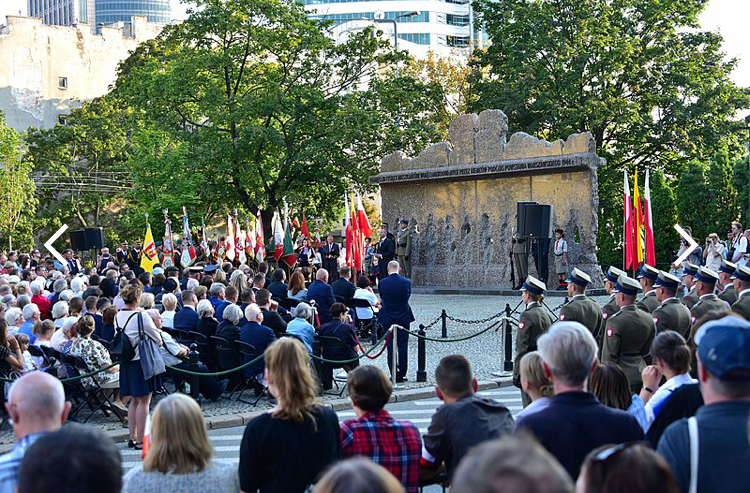 Wola’s past lives on

Whilst Wola is now full of high rise blocks, it had traditionally been an area of industry, low houses and blocks two to four stories high. You can still walk in the footsteps of the old inhabitants of Warszawa, along ul. Wolska, later the main thoroughfare for the remaining inhabitants to leave their flattened city – after the Germans realised the murder of civilians was using up valuable ammunition and preventing the use of them as forced labour.

Now Wola also has the Museum Powstania (link) on ul. Grzybowska. Opened in 2004 it not only helps people to understand the Uprising with hundreds of artifacts such as films and love letters but sponsors research into the history of the uprising. One exhibition “Odbicie, jestem jak Ty” – matches someone from the Powstanie that looked like you, so you can feel yourself in the role and how you would have reacted. It’s a powerful way of keeping alive the memory of those who lost their lives and also those who lived on to tell their stories.

The new residents of Wola coming from all over Poland carried out the heroic task of  rebuilding the city yet respecting the memory of those so cruelly killed, collecting money to erect monuments at their own expense as well as State sponsored ones. There appears to be one place still waiting for a monument. Between 25th August and the middle of September 1944, the Germans shot and burned about 5000 men, women and children on Ulica Okopowa, near to a modern shopping centre.

Many had been sent there from the Śródmieście and other captured parts of Warszawa as the Germans gradually regained control over the fierce fighting.  They were first held at the nearby Pfeiffer factory, not knowing what their fate would be, often pulled out at random of the lines of people being expelled.  In 2016 a birch cross mysteriously appeared there citing this fact.  Clearly someone thinks a monument should be built in this place. Memory is so important, especially as the scale of these events and the individual atrocities can be difficult to comprehend.