Warsaw Uprising: Why I stand to attention at 17.00 on 1 August 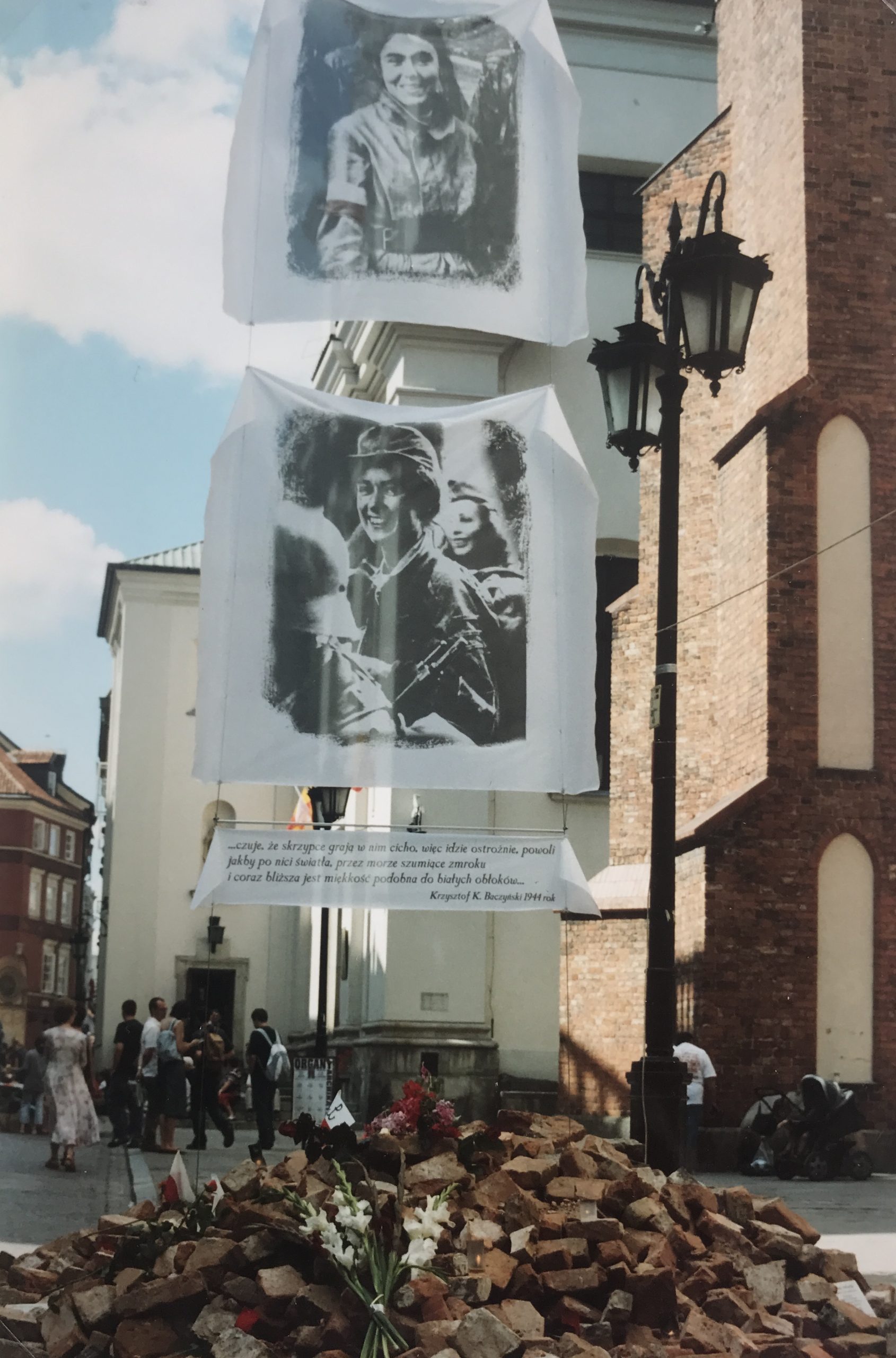 “Stańcie do Apelu” – stand for the roll call always sends a shiver through my spine. The silence just before a soldier or scout reads this at 17.00 on the day the Warsaw Uprising began, is both eerie and deeply meaningful. Over the years I have been on summer scout camps on this day, singing songs of the soldiers and partisans fighting in World War II, before the roll call for all those who died, is read.  Beginning on 1 August 1944, the battle run by the Polish resistance Home Army was a valiant attempt to liberate Warsaw from five years of brutal German occupation.

Children of Warsaw, we go into battle,

For each of your stones, capital city, we will give our blood!

children of Warsaw, we go into battle,

When your command is given, we’ll raise the enemy’s anger!

This song appeared in the underground daily paper on the first day. Recorded for and broadcast on the underground radio station “Błyskawica”, a leaflet with lyrics and sheet music was issued demonstrating just how prepared the people of Warsaw were. It became a symbol of the Uprising in which children as young as nine took part. 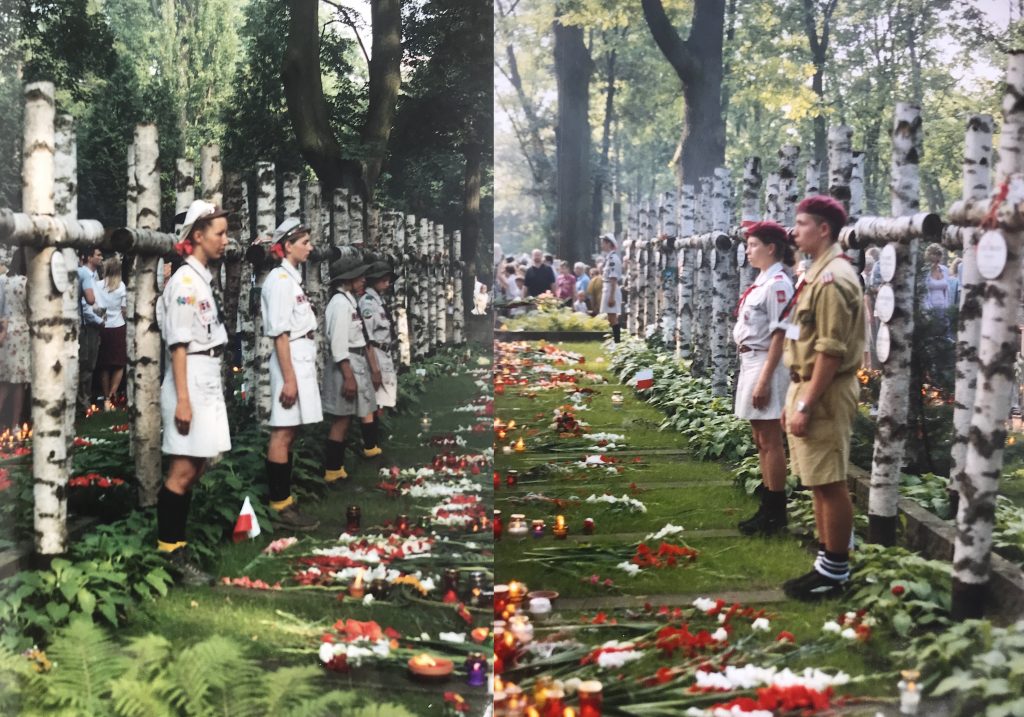 Powązki cemetery where the  graves of the young insurgents were transferred. Marked by birch crosses and guarded by the young (2004)

According to Norman Davies the story of the battle for Warsaw (as it was called by the Home Army) has not been given the significance it deserves in the Western narrative of the war, partly due to embarrassment at its inability to help.  Neither was it brought to the Nuremberg trial despite the fact it resulted in a near total destruction of one of Europe’s ancient capitals and in the murder of between 150,000 and 200,000 Polish civilians plus the death of about 16,000 fighters and wounding of 6,000*.  Had this happened in Paris or Rome it would have been recognised as a critical point of the war and commemorated as such. The post-war communist authorities in Poland severely censored all talk of the Uprising and imprisoned the few remaining fighters. Only in 2004, after the regaining of Poland’s independence was the 60th anniversary of the Uprising properly commemorated.

I attended the 2004 commemorations with a delegation of hundreds of Polish scouts from around the world  – children and grandchildren of the Siberian exiles and a small minority of the survivors of the Warsaw Uprising.  It was a   great honour, with mixed emotions of pride at the young scouts and guides who had fought so courageously and deep sadness at the tragedy of young lives lost. 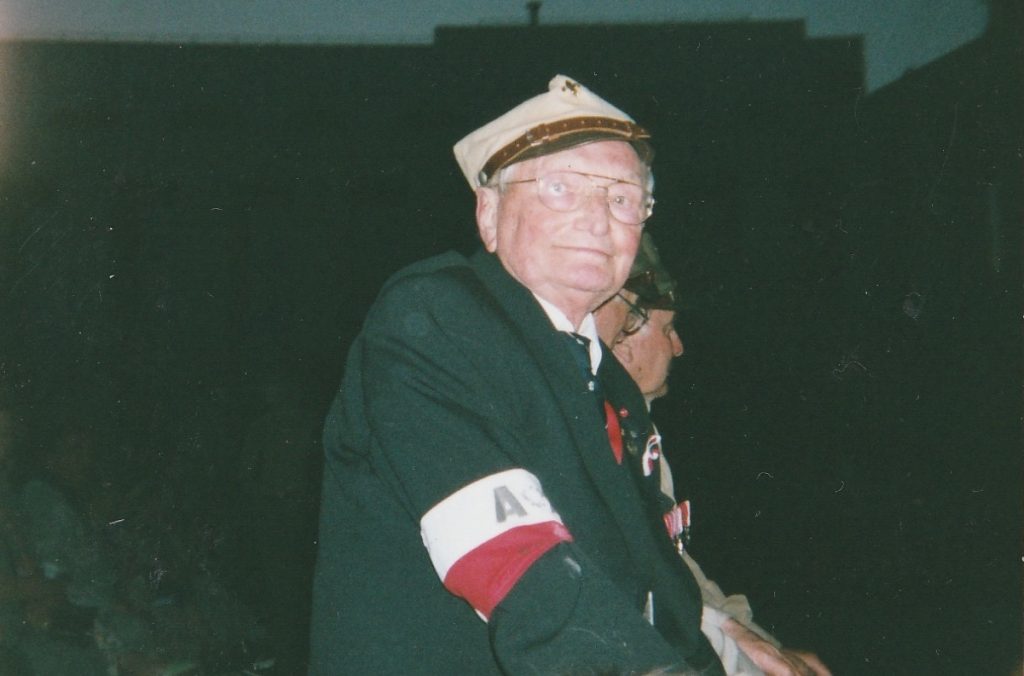 “Why did we fight? not because they gave us orders, not because we understood the politics,, we were young boys brought up patriotically in the scouts, in our families and we wanted to tear the Germans out of Poland”

Witold Szablewski (now deceased, pseudonim “Zygfryd”, “Kiliński” batallion)  –  said this to me many years later, with tears in his eyes for his deceased comrades. The images of the Uprising ever vivid, stayed with him for his whole life. 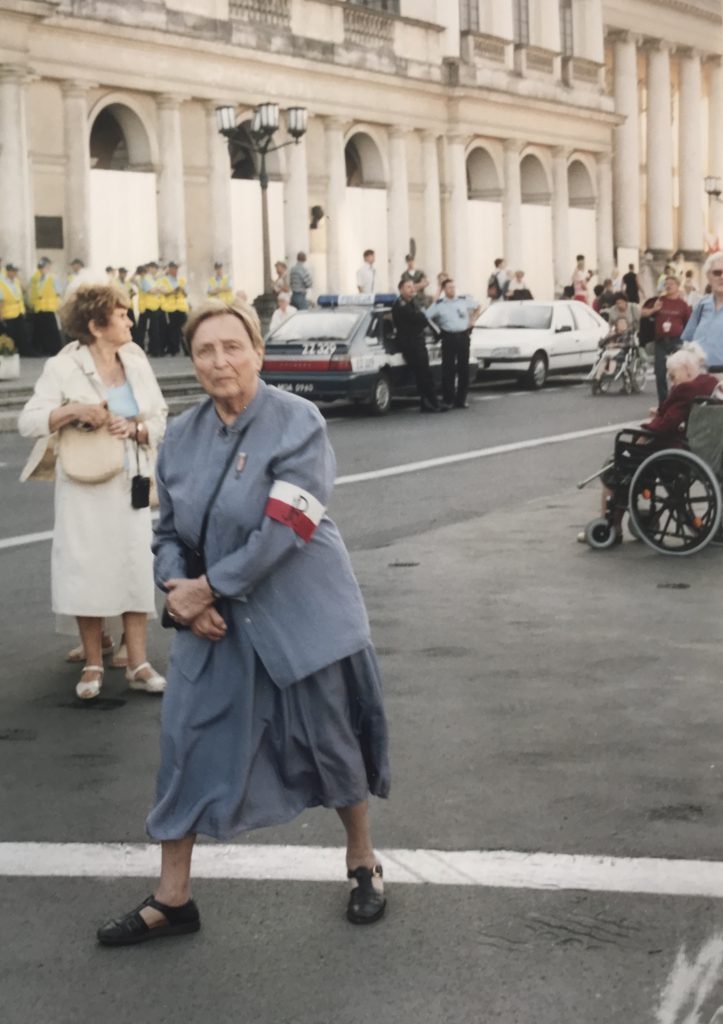 This lady (from 2004) may have been an insurgent, and you have to see beyond her age to see the faces of the young people throwing away their futures for their honour, for their city and country. They lived fast and died in the blink of an eye, mown down indiscriminately for their bravery.

Let me tell you dear daughter, that I was no heroine,

Everyone was building the barricades under fire.

But I did see heroes;

And I must tell you about them.

…..There were so many noises then;

The roar of planes, of fire of despair,

Rising up to the clouds, screaming.

Now the earth and the sky are silent.” 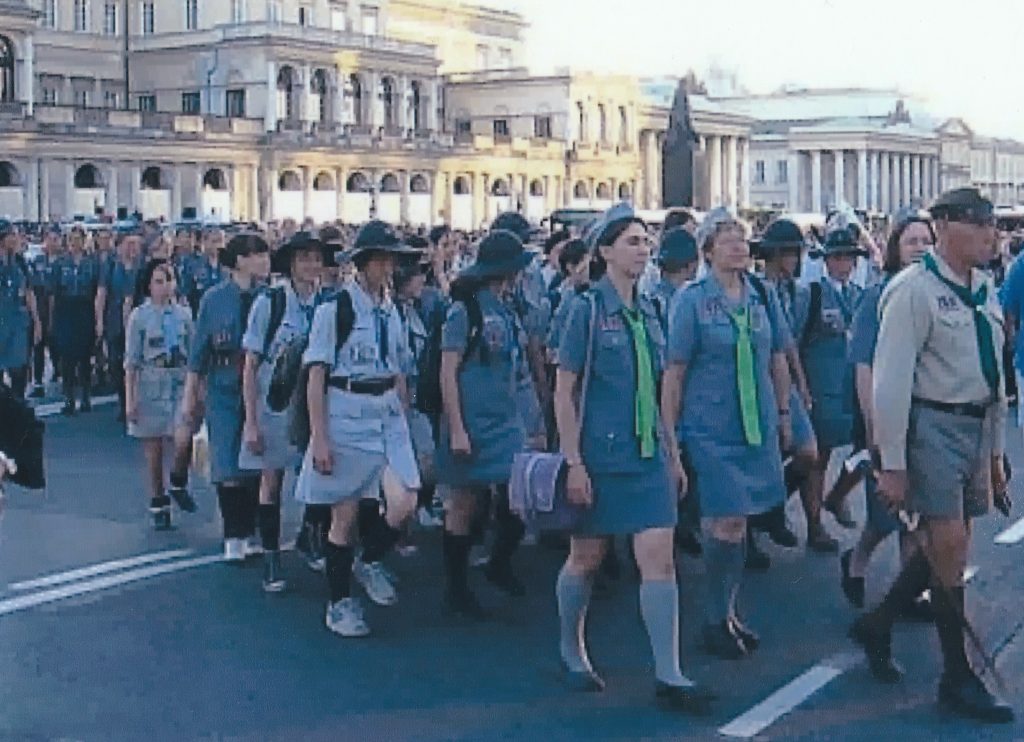 As I marched through the streets of Warsaw in 2004 towards the newly built Museum of the Uprising there was near total silence. One of the elderly people handed me a little PW (Polska Walcząca) pin badge. I have treasured it as a symbol that we are the ones who must keep this story alive. Because so many young people died in vain, we who have seen the return of the freedom they fought for, cannot forget them.

On 1 August watch the Warsaw Uprising Museum on facebook – they usually broadcast the moment that Warsaw trams and cars come to a standstill every year on 1 August at 17.00 Polish time. Read Norman Davies’ book* “Rising ’44” and the Polish Hearth Club will be broadcasting a commemorative event on zoom on 3 August.

You may also wish to read:

Polish Resettlement Camps on British soil link us all
In our search to find out our Polish families' lives both in Poland and in exile, one key element for the Polish soldiers, for their families and also displaced people...
128 Likes

How did Poles deported to Russia in World War 2 escape, to fight on?
The deportation of Poles by the Russians to slave labour camps in the Soviet Union during WWII is well documented if not widely known. You can read the testimonies here....
166 Likes
We use cookies on our website to give you the most relevant experience by remembering your preferences and repeat visits. By clicking “Accept”, you consent to the use of ALL the cookies.
Cookie settingsACCEPT
Manage consent