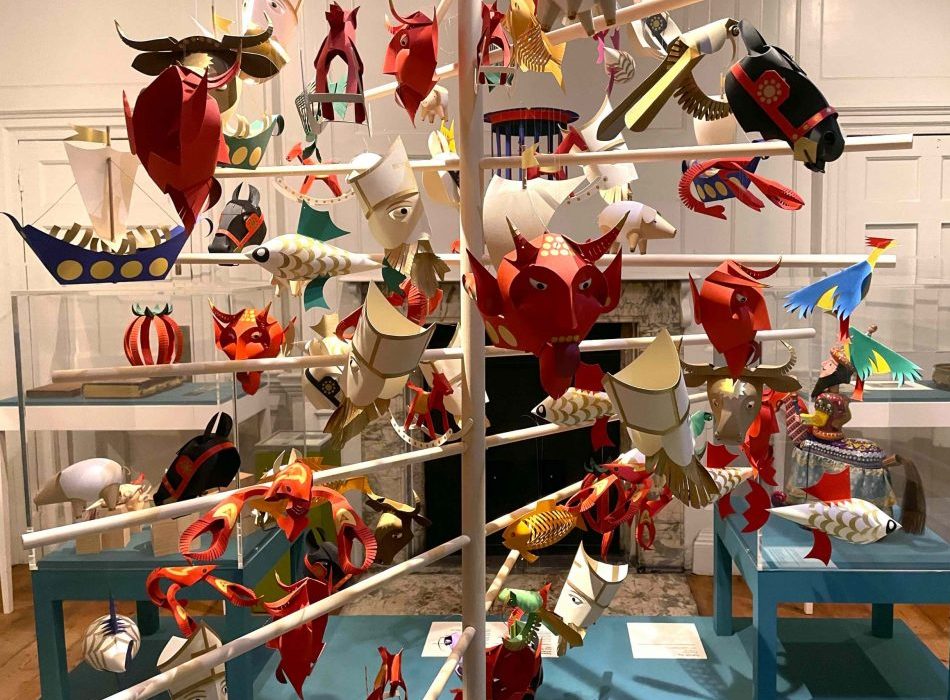 When you hear the name Wyspiański or Wyczółkowski you may think of pastel portraits or paintings of Polish peasants in the vast landscapes of Poland. Sadly little is known outside Poland about this Młoda Polska (Young Poland) art movement of the early 20th century. These names may trip off the tongue easily for Poles but until now their work hasn’t been exhibited in the wider world.

Now a major exhibition exploring the decorative arts and architecture of this movement is at the William Morris Gallery in Walthamstow, London until 30 January 2022.  It’s also perfect to see the imaginative tree decorations and colourful wycinanki (paper cutouts) during the (extended Polish) Christmas period. 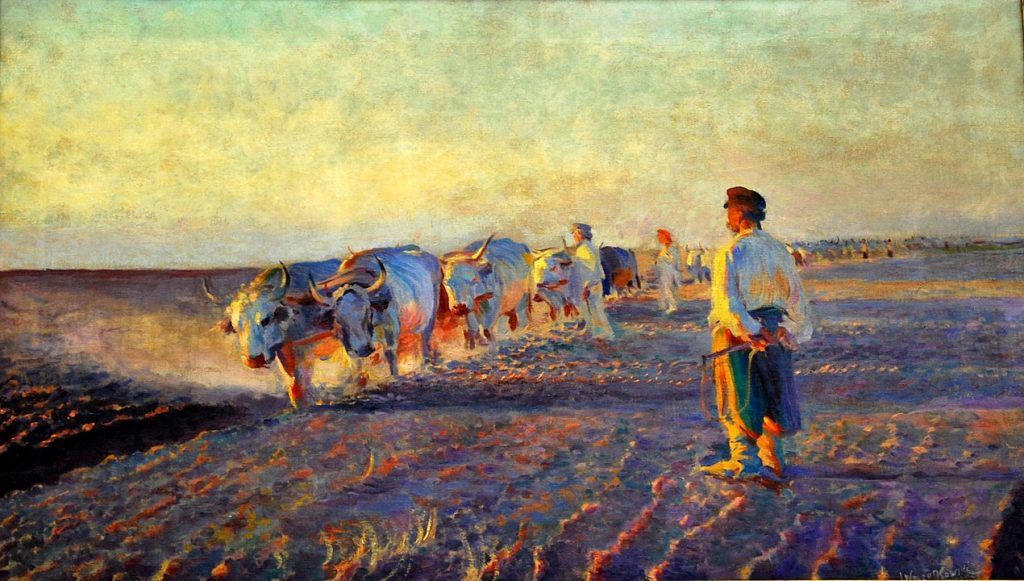 Ploughing in the Ukrainę – Leon Wyczółkowski

The Young Poland movement was named after a series of articles by Artur Górski in 1898, published in the pages of “Życie” magazine in Krakow, criticising the previous positivists and presenting the literary program of young authors. The movement covering the period from 1890 to 1918 was never just about art, but affected writing, music and philosophy, promoting Polish traditions and the expression of Polish national crafts in response to over 100 years under the jurisdiction of foreign powers.  It is this focus on crafts that is so well demonstrated in the exhibition. 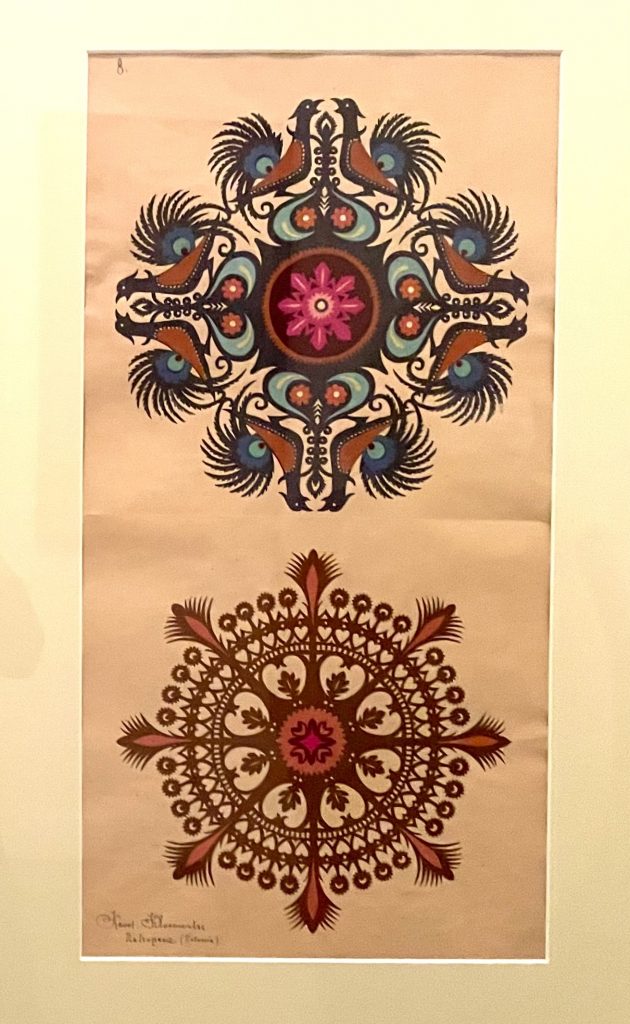 The influence of góral (highlander) style is more apparent here than in the paintings you may view in the Main Art Gallery in Kraków. The paper cuts used by peasants to decorate their cottages together with lacemaking, was elevated by Karol Klossowski (1882 – 1971) to an art form, winning a gold medal at the International Exposition of Modern Industrial and Decorative Arts in Paris in 1925 for his lacemaking legacy based on native motifs. 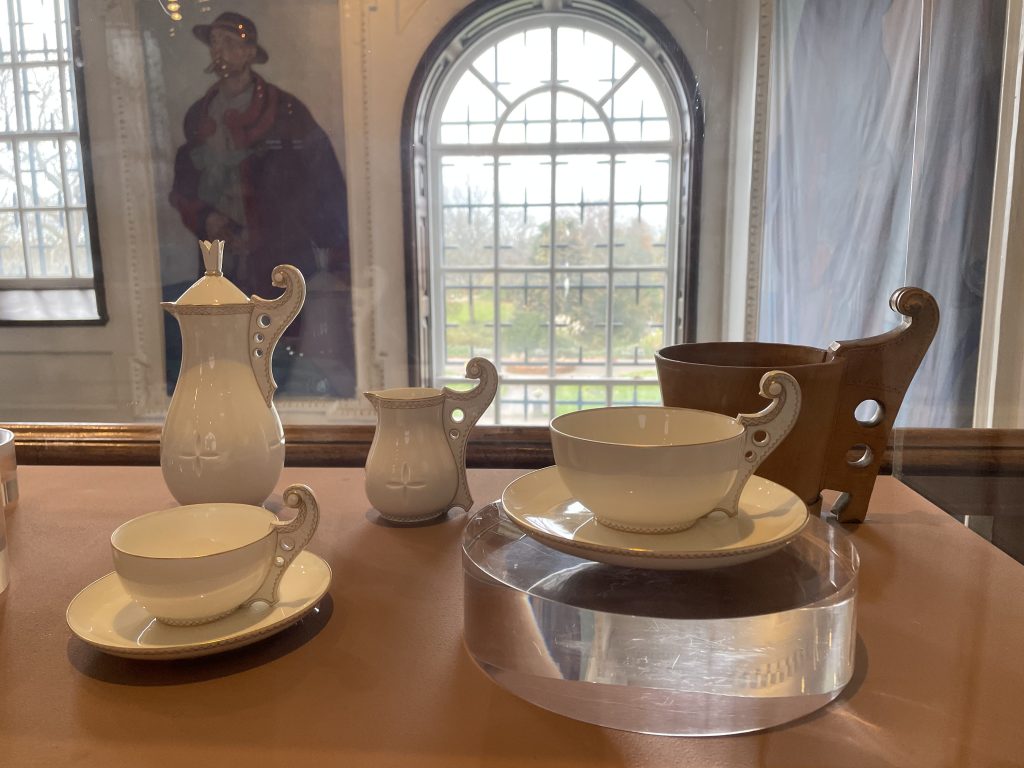 It is this inspiration which the Young Poland artists found in folk traditions which enables academics to make comparisons with the Arts and Crafts movement, their patterns and designs having a strong affinity with the work of William Morris and John Ruskin in Britain, despite the artists having never met their British counterparts.

I was fascinated by this Tea Service designed by Stanisław Witkiewicz (1885 – 1939) and manufactured by the Sèvres pottery between 1898 and 1901. Its handles were inspired by Góral shepherds’ drinking cups which were adorned with the ram’s head ornament. Exhibited in a Paris ceramics store, it showcased Polish folk culture to wider European society. 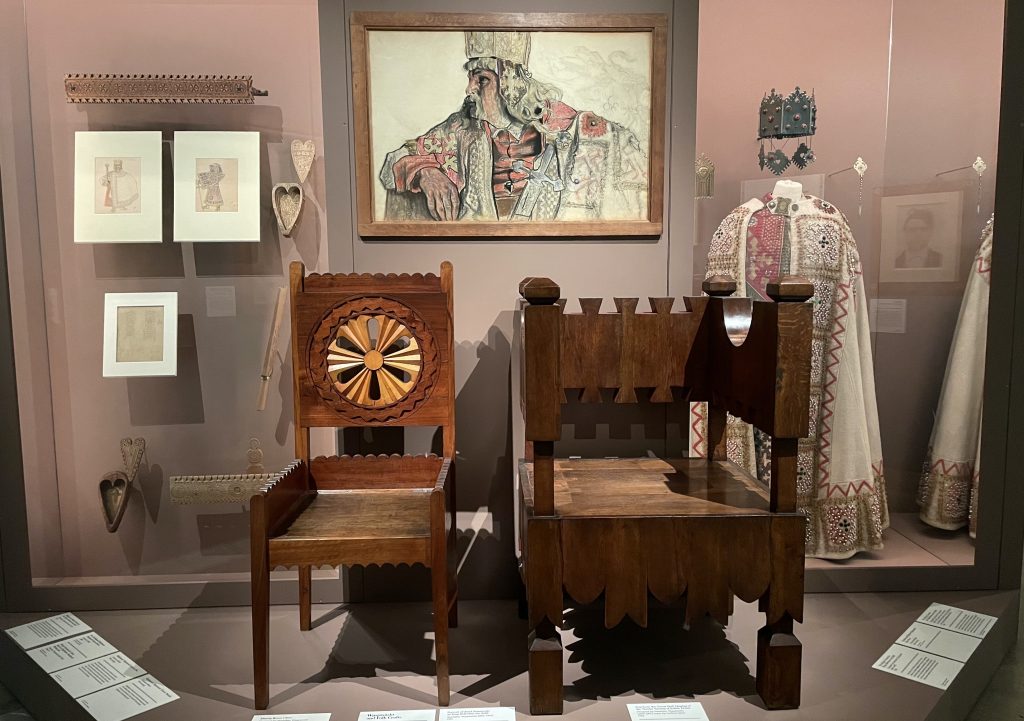 Or the King’s Costume designed by Stanisław Wyspiański (1869 – 1907) for his three-act play Bolesław Śmiały (Bolesław the Brave) which premiered in Kraków in 1903.  He not only wrote the play but planned the set design and costumes. The asymmetric cloak is based on a woollen peasant’s coat. At the time, folk art was considered static and unchanging, and therefore capable of preserving and transmitting old Polish cultural and artistic patterns. Furniture by Young Poland designers is also displayed, though it doesn’t look too comfortable! 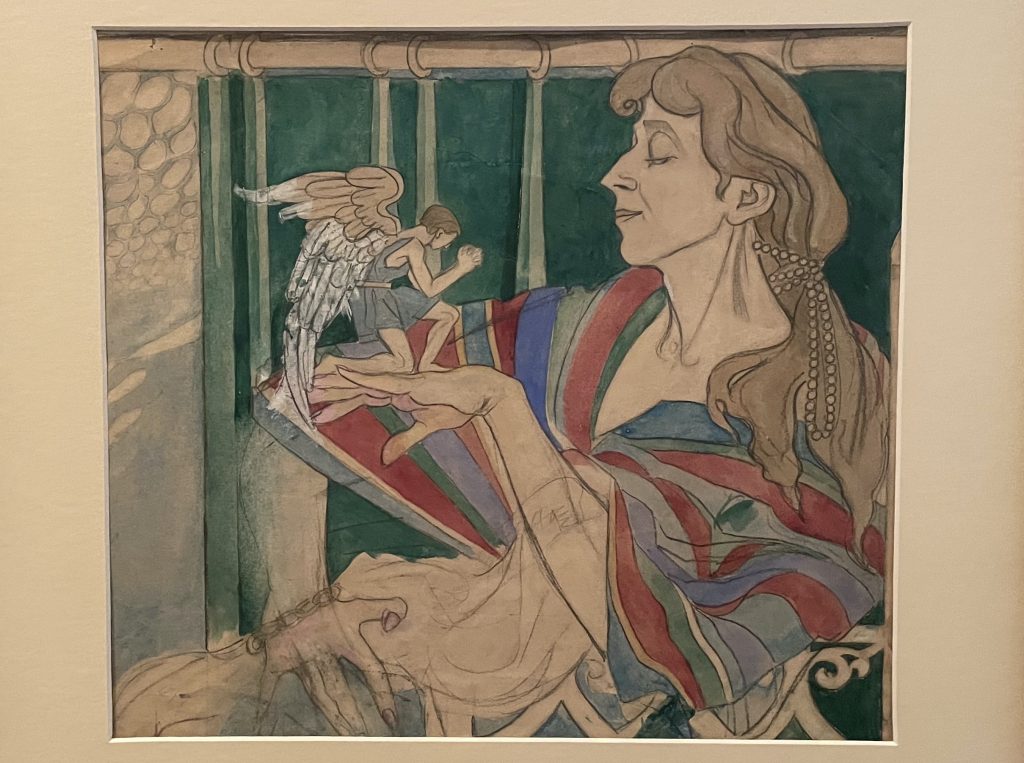 The work of women artists is also covered extensively with the unique style  of Maria Pawlikowska- Jasnorzewska (1891 – 9 July 1945) born into the famous Kossak family of painters and mainly known for her plays and poetry. There were hundreds of artists and designers in the Young Poland movement based in and around Kraków, where under the Austrian partition they had more freedom than in other Polish areas.  Maria Witkiewicz (1853 – 1931), music teacher and author and Bronisława Rychter-Janowska (1868 – 1953) painter and publisher, are also featured. 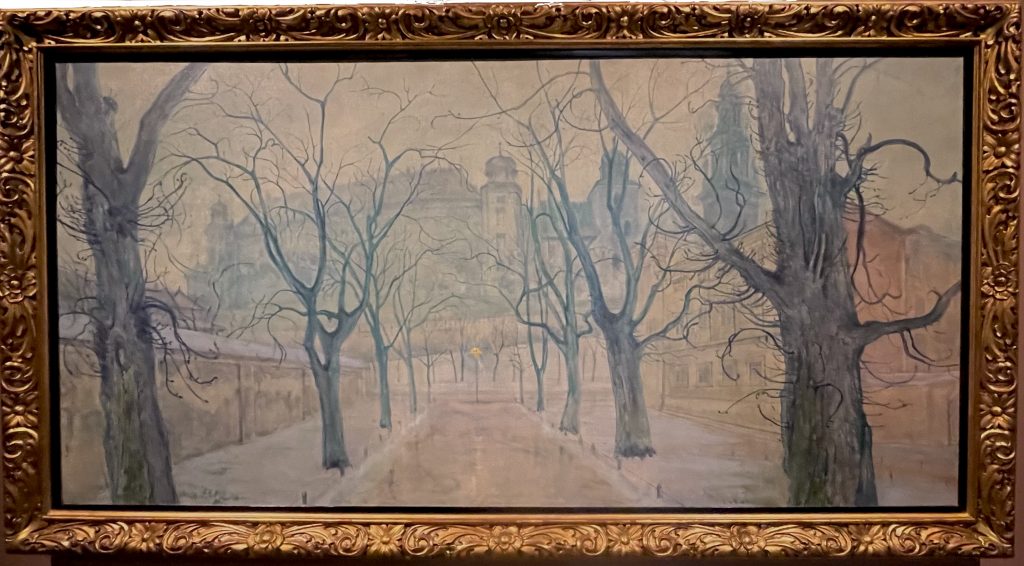 Dawn at the Foot of Wawel Hill – Stanisław Wyspiański

The exhibition finishes with this painting by Wyspiański of dawn light in Kraków,  looking towards the Wawel castle which was used as a garrison for the Austrian troops and had fallen into a state of disrepair. The light personifies his hope of independence for Poland. 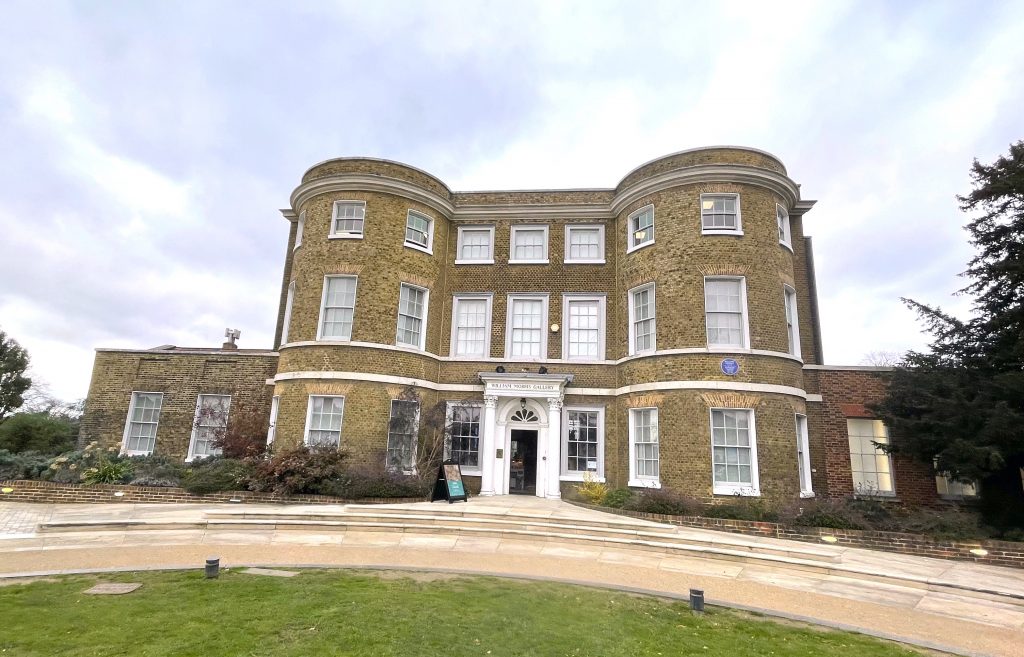 One of the ideals that linked Young Poland to the arts and crafts movement was a belief that everyone had a right to beauty in daily life.  In the gallery you can also view William Morris’ work as a textile designer, poet and artist amongst his many talents, in the house he lived in. I visited the exhibition in early December and in my opinion it gives a really in-depth view of the life and work of these inspirational artists and how deeply they were influenced by Polish national culture. And most of the Young Polish artists and creators studied at the Kraków School of Fine Arts, taught by no other than the father of Polish painting Jan Matejko.

If you can’t get to the exhibition, this detailed video gives you a great feel for it:

The humble sosna pine tree of Poland
My family's quest for finding pine forests is quite legendary. Since childhood, I've been taught to look for the sosna (pine-tree) on walks in the countryside. Whether for grzyby (funghi),...
96 Likes

Artist Jan Matejko – putting Poland on the map
The portrait of Jan Matejko’s “Copernicus: Conversations with God” recently arrived at the National Gallery in London. It is the first work of a Polish artist to be on show there and...
263 Likes

An All Souls’ walk through Polish cemeteries
Saunter with me through some of the famous Polish cemeteries I've visited through the years, within and outside Poland's boundaries.  Poland's All Saints Day on 1st November is a national...
119 Likes
We use cookies on our website to give you the most relevant experience by remembering your preferences and repeat visits. By clicking “Accept”, you consent to the use of ALL the cookies.
Cookie settingsACCEPT
Manage consent