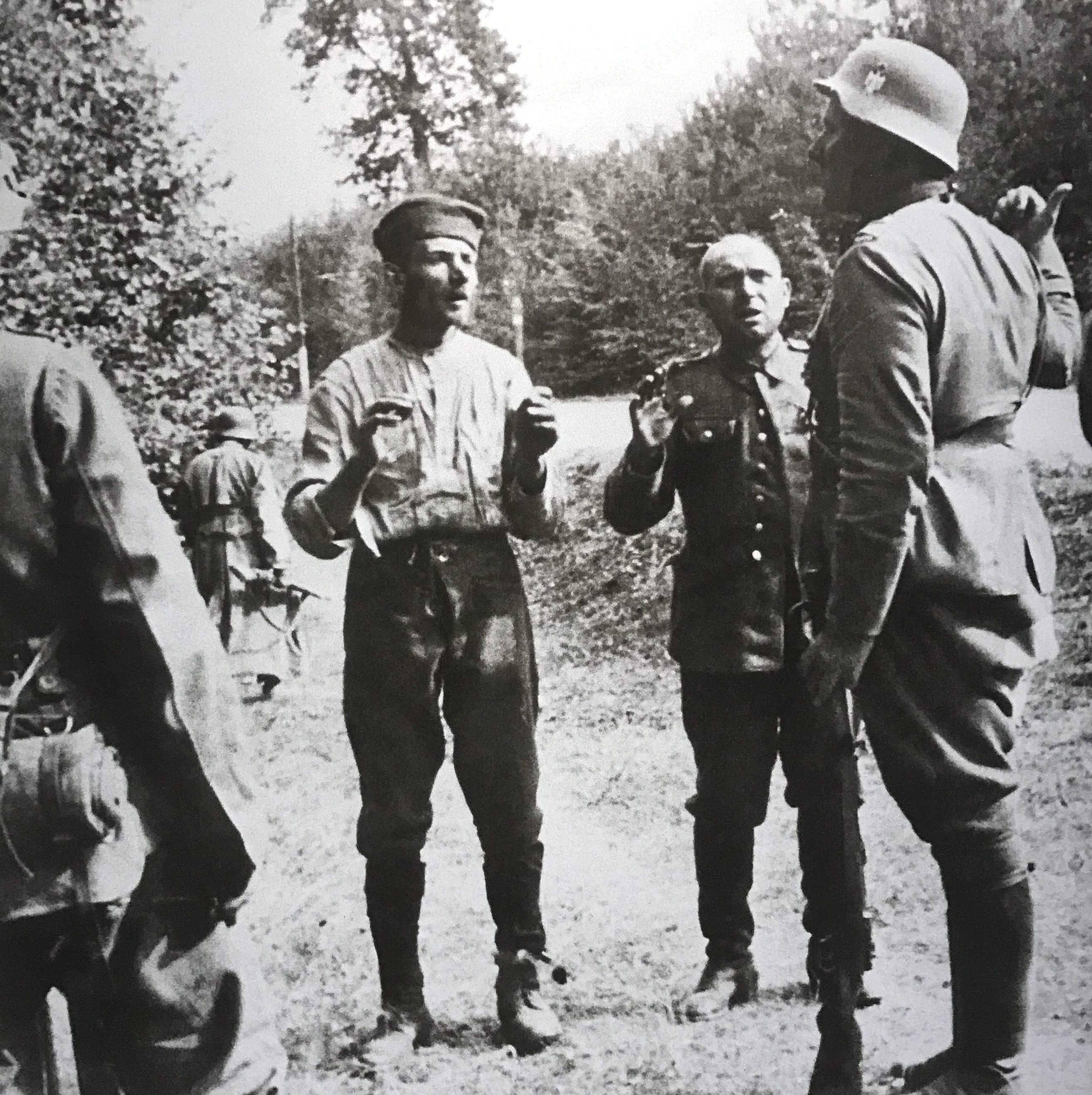 It was the start of a hot, summery Friday with clear blue skies. Children had been getting ready for school the following week, but school had been called off indefinitely a few days before. At 0445 German planes started attacking Gdańsk, Kraków and other major towns and German soldiers attacked Poland’s western and southern borders. 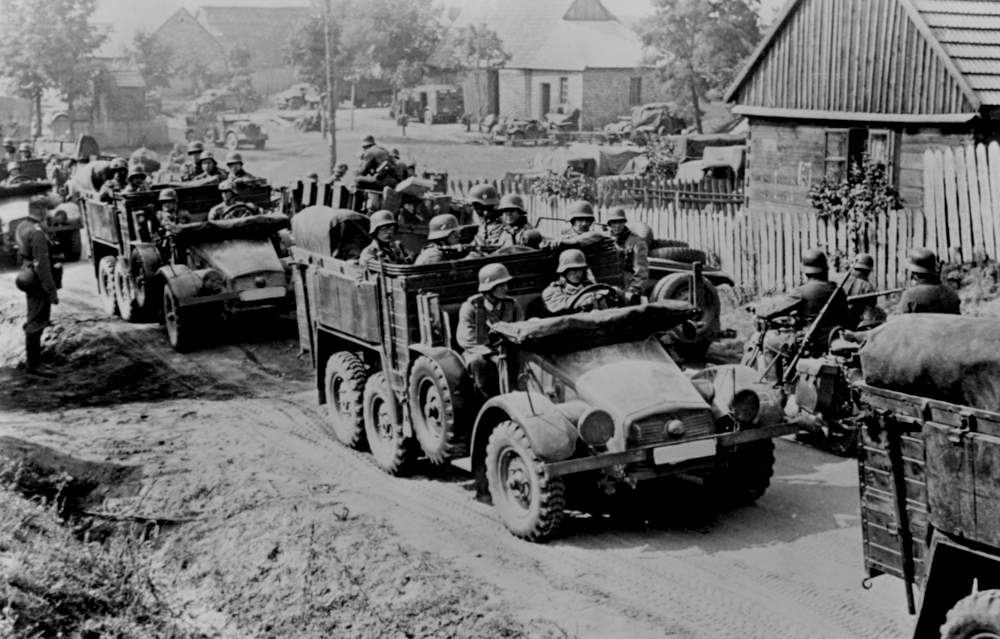 All summer, there had been skirmishes in border towns, started in secret by Germans. Home-made bombs exploded in German owned properties, fights were started, and it was all blamed on Polish aggression.

People were nervous, yet the government,  basing decisions on expected help from France and Great Britain,  thought any German attack would soon fall on its knees, so the civilian population was unprepared for war. My mother was 8 weeks old, her parents had not long ago bought her a pram, when like other reserve soldiers, my grandfather was mobilised on 31st August. Just 70% made it to their places of callup as many were caught up in the chaos. War had begun. 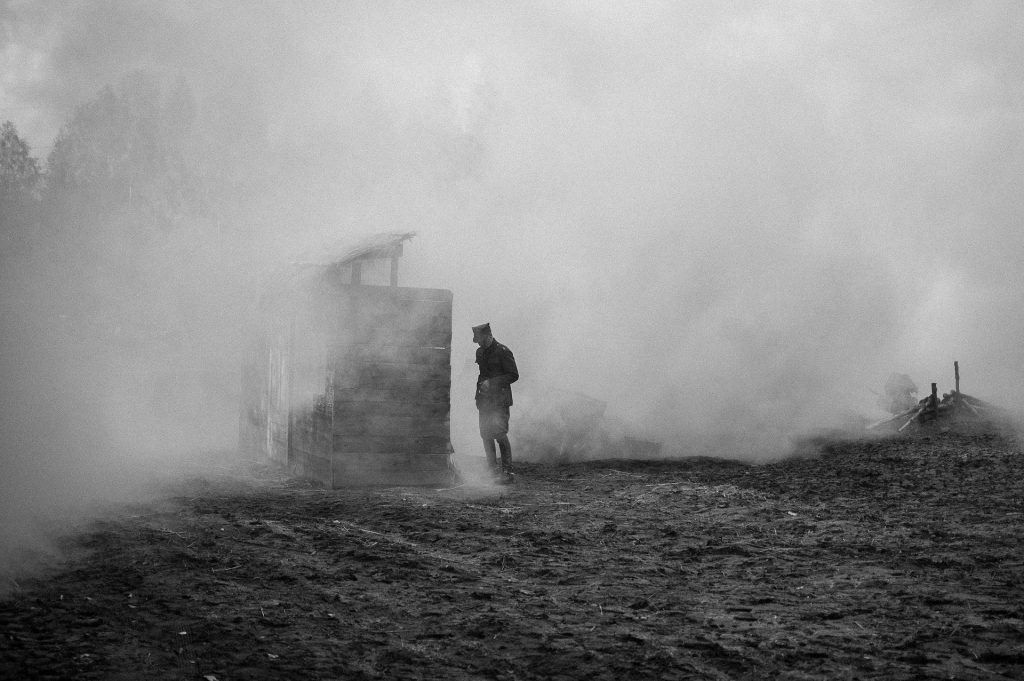 Great Britain declared war on Germany on 3 September, as did France, but no fighting occurred. Polish soldiers fought on all fronts whilst German planes also targeted civilians. My father remembers falling flat in a field with his mother as the planes swooped down, bullets whistling overhead.

The weather continued to be sunny and people moved away from towns if they could, in whatever transport possible, but when the Russians unexpectedly invaded from the east on 17th September, many found themselves under another oppressor. Poland had no chance of victory and despite valiant fighting by both military and civilians, including at Westerplatte on the coast, they were finally defeated on 6 October. 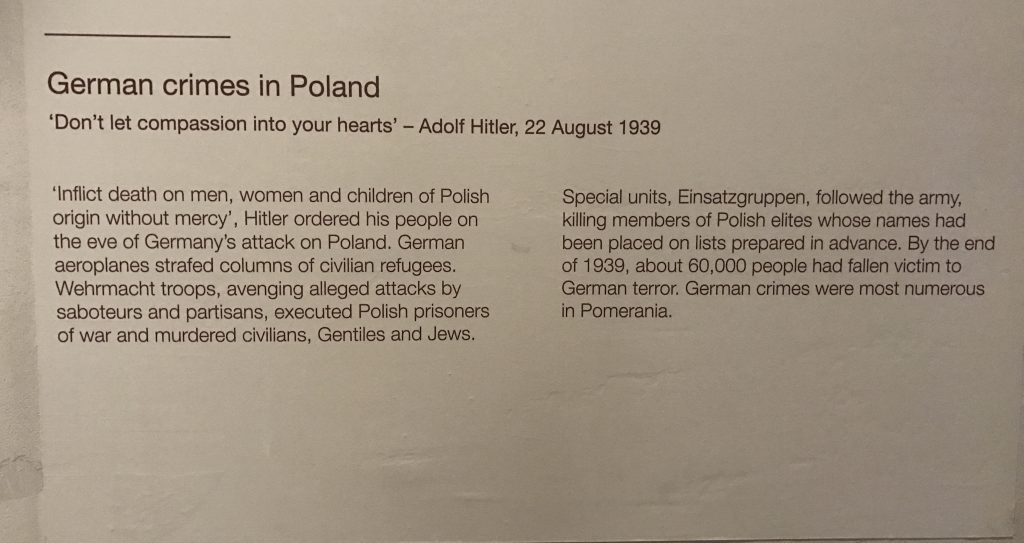 Hundreds of thousands of civilians were killed and this September campaign of resistance was just the beginning. An estimated 80,000 soldiers managed to escape to neighbouring countries along with the government, who never officially surrendered, in order to continue the fight from elsewhere.

I visited the stunning and relatively new World War II museum in Gdańsk on a rainy day this August. The building looks like it’s about to collapse.

It’s dark. The exhibition starts underground, on the 3rd floor below ground level. 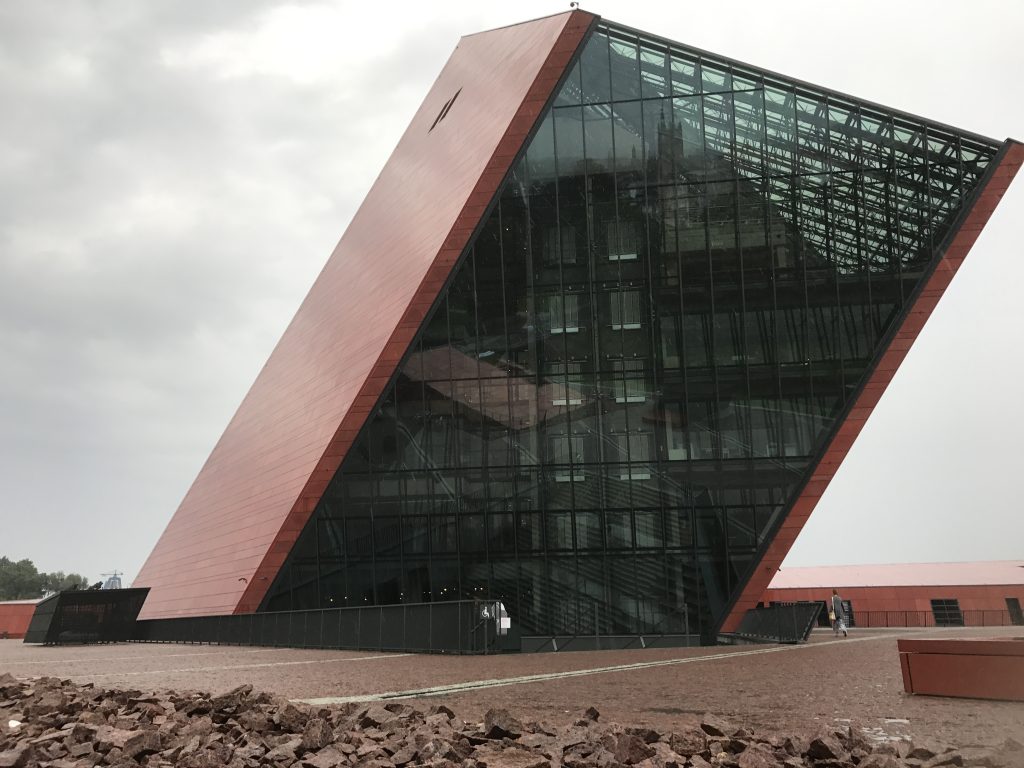 The walls are painted a very dark gray, they’re asymmetric, towering above you, there are no straight lines. 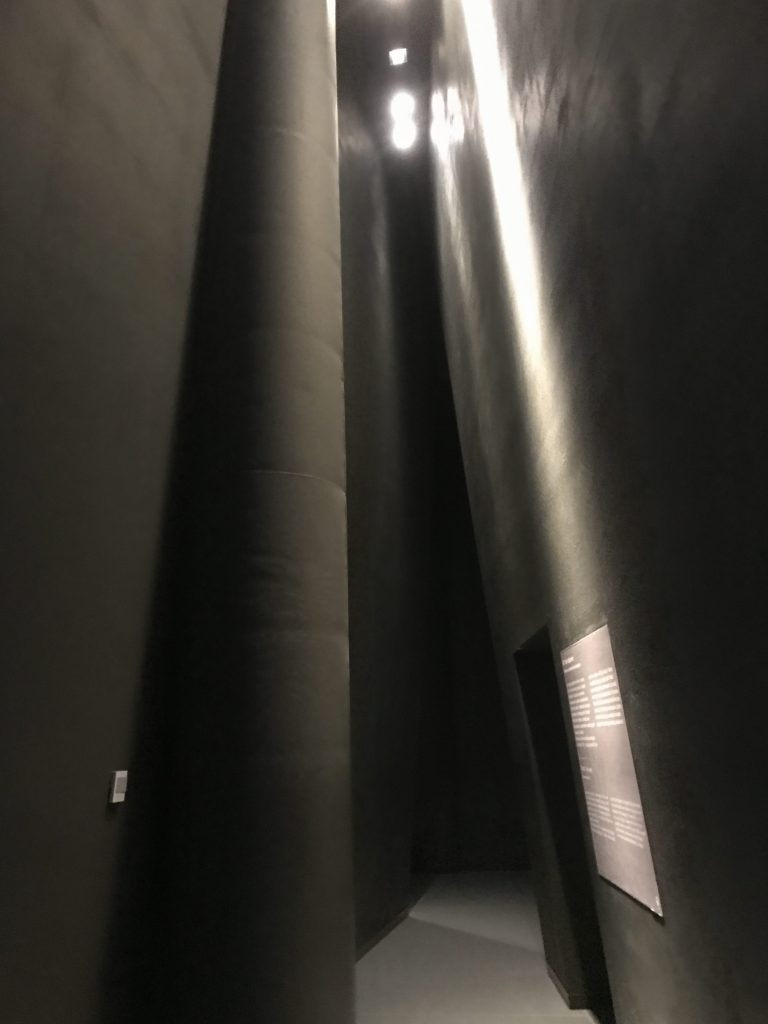 The architecture gives you a sense of unease. You can get lost and feel totally out of control. This is the real face of war, not cosy air raid shelters but loss and bewilderment, utter misery. There is no gratification of war here, only the harsh, brutal reality.

Every so often you see a black metal ladder reaching up high, yet just out of reach. It’s full of symbolism. 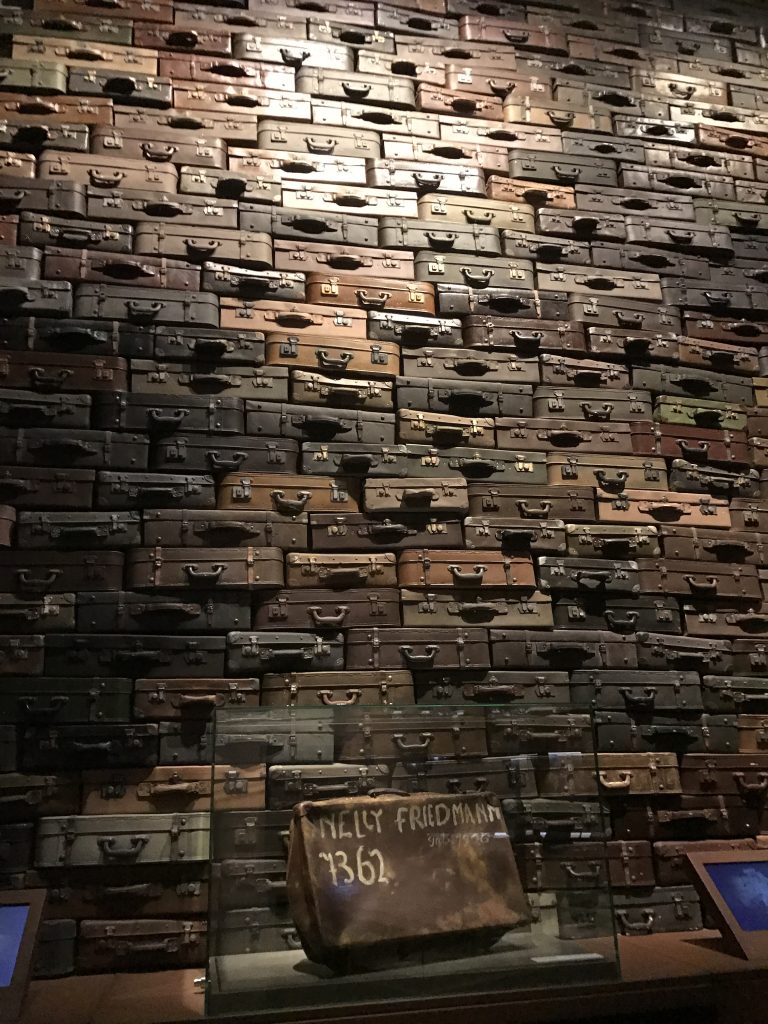 I walk through rooms hung full of photos of the deceased. They’re smiling, happy, proud, no fear in their eyes. I see real wagons which took men, women and children away.

It’s the personal that hits home, like this shirt of someone murdered, because the totality 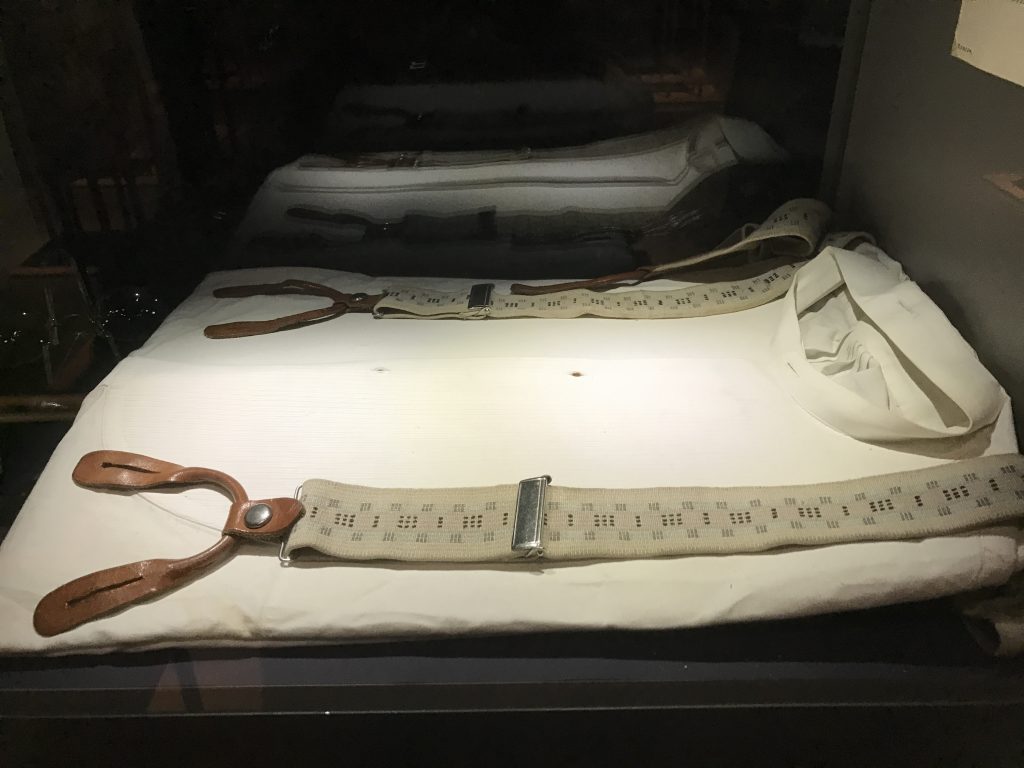 of it is beyond comprehension. There is a film of Russian soldiers, stretching over the horizon, thousands of them, prisoners of war, many of whom starved to death in inhumane conditions. A similar fate befell German prisoners of war and a staggering 20,000 Polish officers were shot by the Russians, one by one in and around the Katyń Forests.

There are no victors here. The exhibition takes you through the whole war including Italy and Japan’s involvement and leaves you feeling sick, sad and overwhelmed..* 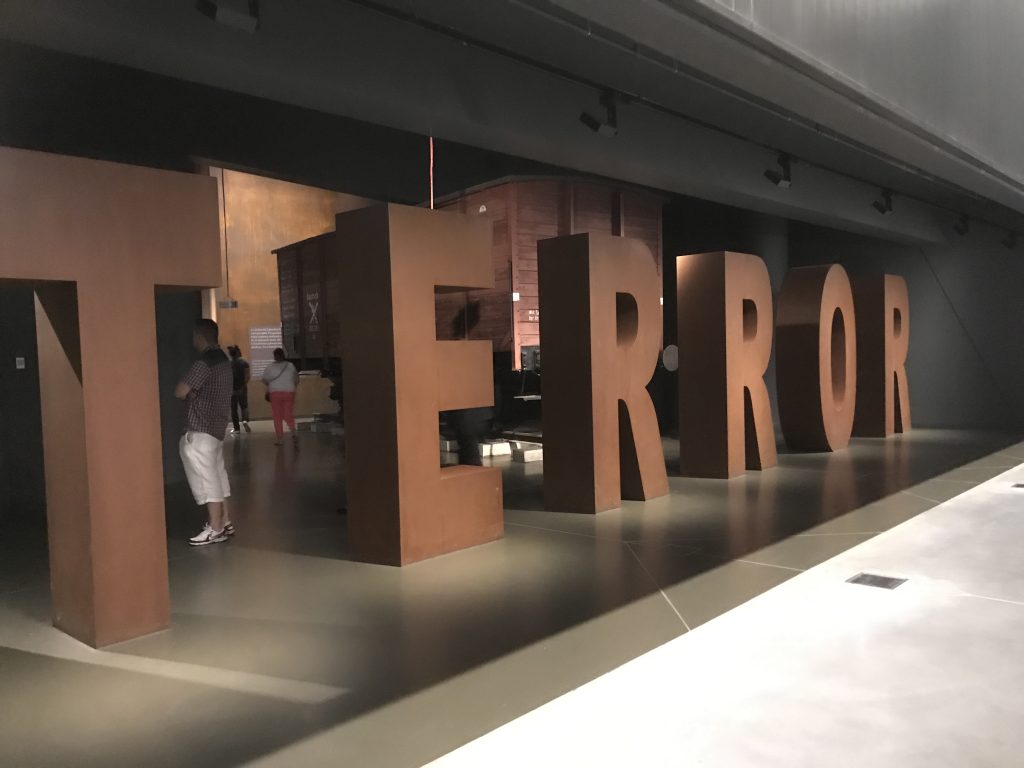 Yet in 1939 who foresaw this hell? The world walked into it, and for this reason, everyone should visit this museum, all Europeans, to know what happened, why we should call out Fascism wherever we see it and fight for European solidarity, now more than ever.

* since 2017 the museum’s focus has changed to incorporate more of Poland’s losses and war heroes.