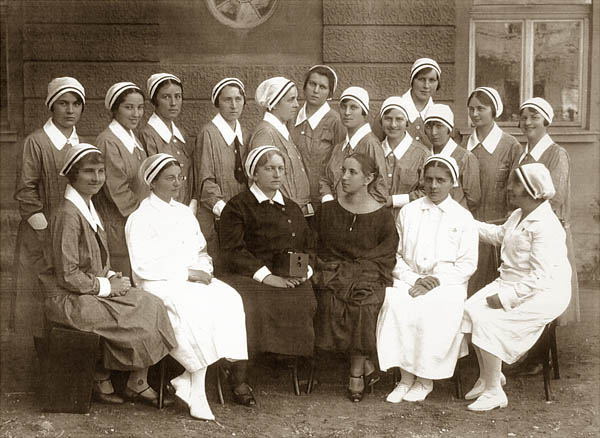 International Nurses Day is celebrated annually on 12 May, Florence Nightingale’s date of birth. My great-grandmother’s sister was a nurse during WWI and there are medics in my wider family, some of whom struggled to study in the post-war years in Communist Poland due to their background. In this year of women’s emancipation in Poland and the UK, I wanted to highlight three Polish women of history who, with absolute determination, set up hospitals and brought new technology and nursing practices to Poland from abroad, despite the odds.  Their stories combine true grit and girl power, before either was ‘a thing’.

(1882 – 1939)  The daughter of a wealthy industrialist and philanthropist, her medical studies  began in 1905 in Geneva, then at the School of Florence Nightingale at St Thomas’s in London. Both periods of study were interrupted due to her mother’s illness. This was at a time when Poland didn’t exist  and Poles didn’t have easy access to education – so many studied abroad. After both her parents died, she used the wealth from her inheritance to build a children’s hospital in Warsaw, named after her parents. It became one of the most modern hospitals in Europe. Zofia only allowed unmarried women without children to work, so they could devote themselves wholeheartedly to the care of the children.  She was also one of the people who set up the Warsaw School of Nursing, but refused to become its Director until she had completed the nursing studies she had begun. After returning from these studies in Bordeaux, France she ran the school for 8 years. Tragically, she died in a sanatorium on 2 September 1939 as Warsaw was being bombed, in a hospital deprived of power or water.

(1884 – 1969) Her character was depicted by  Stanisław Wyspiański in his novel “Wesele” as Haneczka, the sister of the young groom Lucjan Rydler (her brother in reality).  She took part in setting up the Kraków School of Nursing in 1911 and contributed to the opening of several other hospitals. She graduated from the school and started teaching in 1913. During the First World War she trained nurses for work in military settings and in epidemiology. Many of her students were instrumental in setting up the University School of Nurses and Hygienists from 1925 at Kraków University where she became Deputy Director. She also travelled extensively to understand other centres of excellence in Budapest, Vienna, Brussels, Oslo and Helsinki. After WWII and with the Communist Government in charge, she was shunned from teaching or practicing nursing but was finally given a pension after 1956. Her professionalism was based on a strong patriotism, christian values and an independent mind – for which she paid heavily. I think you can tell these qualities from her photograph. (1902 – 1966) Niece of Zofia Szlenkier, she suffered from illnesses of the lung as a child, spending a great deal of time in hospitals and sanatoriums. During the Bolshevik Revolution she tended to the wounded soldiers and later started studying at the School of Nursing in Warsaw in 1920. Eager to learn as much as she could, she studied further in France, worked with the U.S. Red Cross as a nurse and also went to Belgium to observe their nursing practices. She taught at the Kraków University School of Nurses and Hygienists between 1926 until 1929 and edited the monthly publication “Nurse Poland” from 1929 to 1939. Losing her father in a concentration camp and brother at the Katyń massacre during the war, she began to organise nurses for home care in Warsaw, helping to feed and resettle refugees, also taking part in the resistance movement. As she had also become a Benedictine Oblate (lay member of the order),  she moved into nursing the poor and the neglected in her own parish after the war, ensuring the newest practices were used for patients. She was recently beatified on 28 April 2018 in Poland. What an incredible soul.

I am surprised that we know so little about these women. Even on Polish websites it was hard to find articles about them. There are many more stories like these on the website of the Polish Virtual Museum of Nursing which has itself been honoured with the Florence Nightingale Medal.

Where do your Wigilia (Christmas Eve) dishes come from?
As we gather for our Wigila (Christmas Eve) supper, the dishes we prepare are a mixture of traditions from our families. By repeating these customs, we create memories for future generations...
49 Likes
We use cookies on our website to give you the most relevant experience by remembering your preferences and repeat visits. By clicking “Accept”, you consent to the use of ALL the cookies.
Cookie settingsACCEPT
Manage consent