Our Polish Heritage – the Winged Hussars 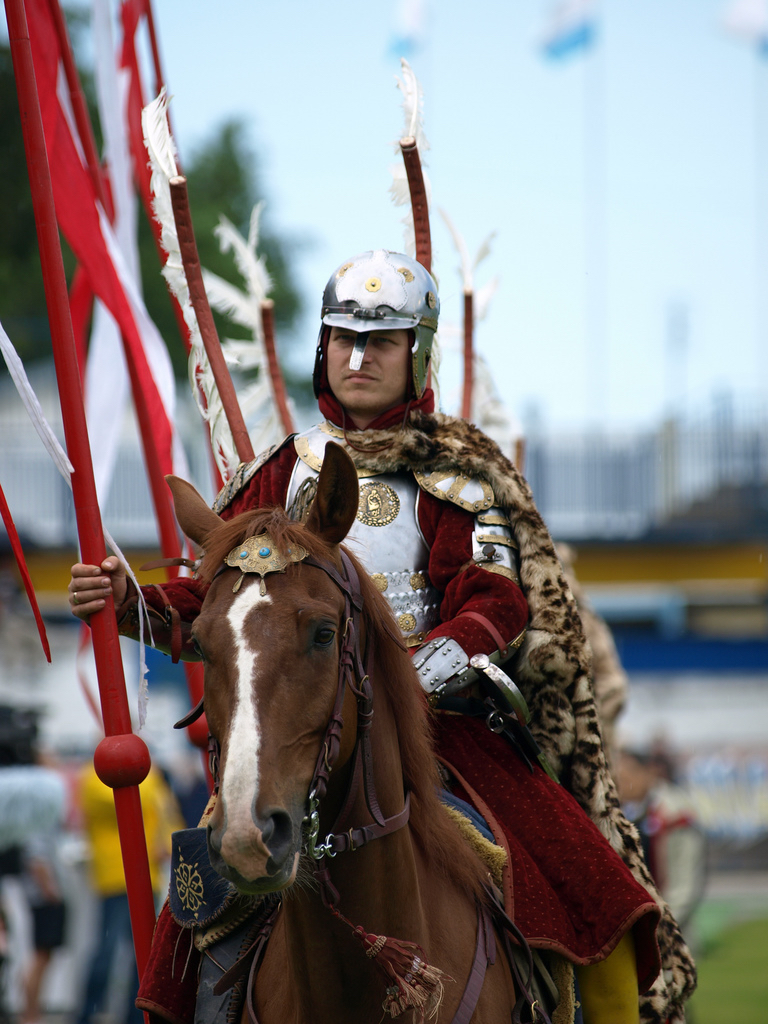 If you thought the Polish Hussars belonged to history, you’d be wrong because there are re-enactment groups, one based in the castle town of Gniew, about 60km from Gdańsk, the Chorągiew Husarska bringing to life the exploits of the Polish Winged Hussars, re-enacting battles for the public, for film and TV.

SO WHO WERE THE HUSSARS?

Polish horsemen who wore huge wings made of wood and bird feathers attached to their armour. Hussars were also known in Hungary but in Poland they were established in the 16th century and survived until the middle of the 18th century. The first time  I heard of the magnificent Hussars was at Polish School, hearing about them liberating Vienna from an Ottoman siege (the Turks) in the summer of 1683 with King Jan Sobieski at the helm, yes, I clearly did listen at that point. Thousands of  horsemen led the final charge,  headed by 3,000 Polish Winged Hussars.

I have an image of the King resplendent in his armour and richly embellished cloak arriving with his army to the cheers of people who felt abandoned in Vienna, as it was expected to fall shortly. The Ottomans were defeated and Kara Mustafa, he of the tent that used to hang in Ognisko, fled with his troops.  The battle didn’t  just involve the Poles, as we were taught (actually it was the Polish- Lithuanian Commonwealth) but they fought as part of an army of sixty thousand men, including from many German principalities led by Charles Sixte of Lorraine. The  Polish contribution to the battle has become known as the largest cavalry charge in history. 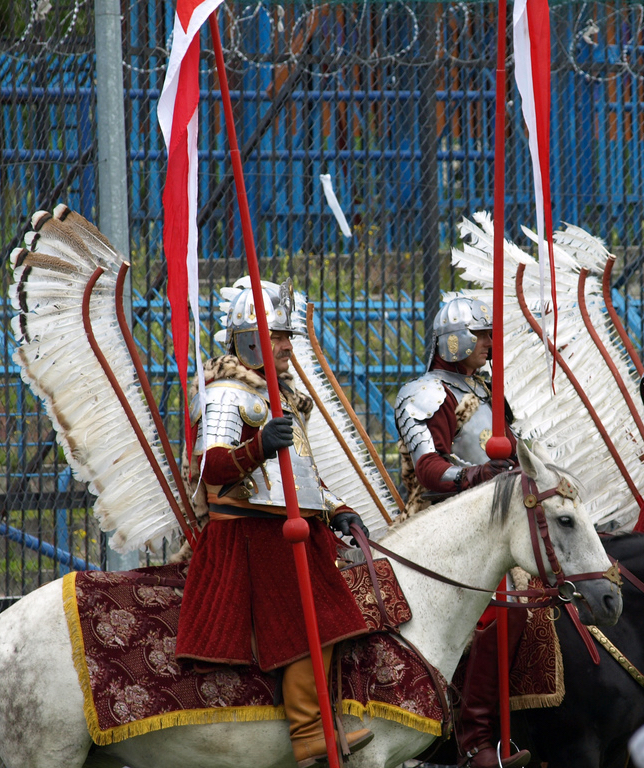 WHAT WERE THE WINGS MADE OF AND HOW DID THEY FIGHT?

Originally for the Hussars the most important kit was a helmet, mail armour, shield and lance. But after 1550 the first reports are recorded of huge wings made up of eagle, crane or ostrich feathers, inserted in a row into  wooden battens and fixed either to the saddle or to the backplate of a man’s armour.

The Hussars tended to fight in squadrons of 150 – 200 men on horseback, heavily armed and attacking in two lines, galloping side by side, with long lances at the ready to shock the enemy. Once in the fight, they would use side arms and firearms. This was a superior method to the more usual cavalry charges which tended to discharge fire arms and then ride back to reload.

It has been said that the rustle of these wings frightened enemies’ horses, but in reality it was probably the sheer psychological impact of a knight in armour looking like a superhuman animal that aroused not only respect but also panic in the enemy. 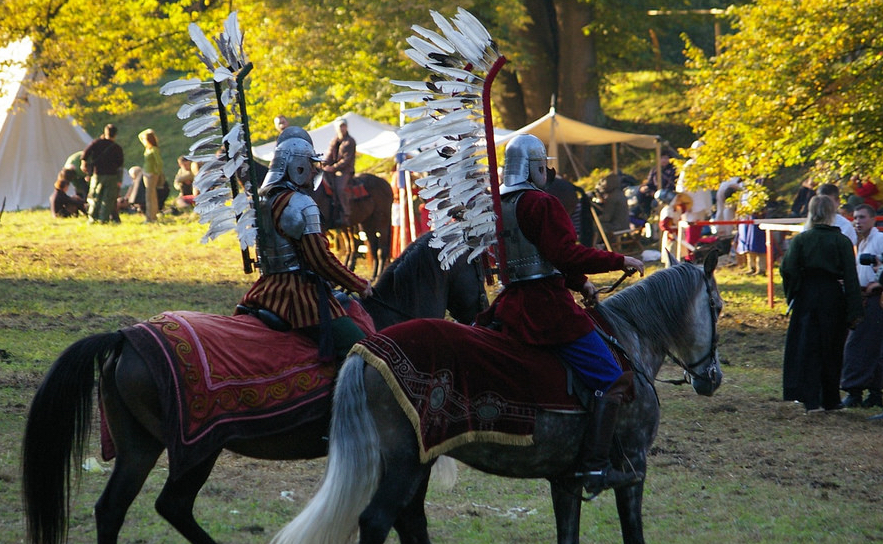 WHERE CAN YOU SEE HUSSAR UNIFORMS AND WEAPONS?

A small number of hussar objects dating from the late 16th and early 17th centuries may be found in Polish collections. A group of helmets have been preserved in the Polish Army Museum in Warsaw, in the State Collection of Art at Wawel Castle in Kraków, and in the Castle Armoury at Malbork. A whole wagon full of such hussar hats was found in the bed of the Vistula near Warsaw just be­fore World War 1.  A great number of hussar cuirasses (breastplates) from the late 16th century are preserved in the old Arsenal of Graz in Austria, but there are also good examples in the museums of Warsaw, Kraków, and Kornik Castle, near Poznań.

There’s apparently  a full armour (see below) in the old city of Nowogródek (birthplace of Adam Mickiewicz), at the Novogrod Kremlin. 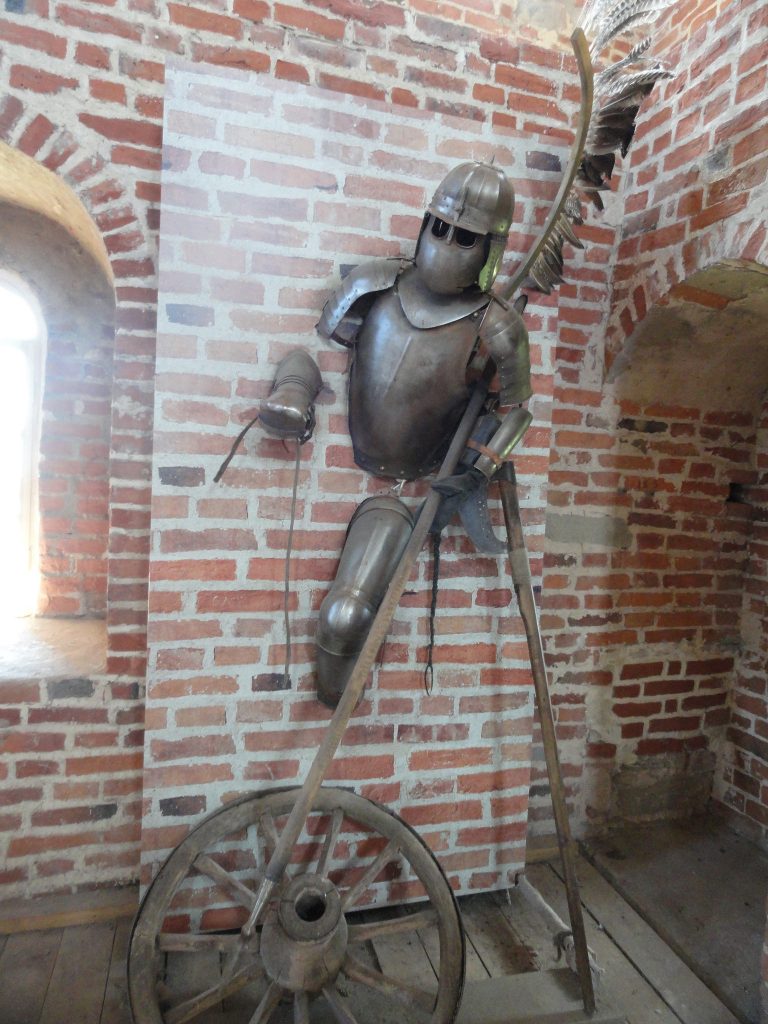 Poland has a good collections of Hungarian-Polish sabers used by  cavalrymen and infantrymen with longer blades, reaching about 80-85 cm.  Cavalrymen often had emblems of bronze or brass, fixed to their breast­plates, often a knight’s cross, or a medallion with the image of the Virgin Mary standing on a crescent.  There are also lances in Polish museums with an average length of 5 meters, some painted in motifs of golden feathers against a red background.

During the 18th century the cavalry were used more as attendants for royal entrances, weddings and funerals. A writer of the time Jędrzej Kitowicz said:

“It was something to watch when a hussar squadron passed in parade! No monarch in the world had any­thing like this.”

And of course the hussars are mentioned in Henryk Sienkiewicz’s „Ogniem i Mieczem”. In recent times, Polish painters and novelists have rediscovered the hussar tradition and his­tory and many people find huge pride in the achievements of this noble fighting force. There’s even a role-playing Windows based game, Mount and Blade Ogniem i Mieczem in which you can call up the Hussars to the fight.