Since 1928, the last weekend of June has been known as the Święto Marynarki Wojennej (Polish Navy Day). Although Morse Code is no longer used as an international standard for maritime distress, many countries still train staff in it and a lot of people, particular amateur radio operators use it.  Harcerze and harcerki  (boy and girl scouts) learn it too. One word that is used to remember the morse code in Polish is:

FILANTROPIA  –  goodwill to fellow humans, the act of promoting the welfare of others.

and it helps to learn the letter F in morse code:

So for the sake of goodwill, here’s the whole morse code set of words in Polish, with some great ones like the name LEONIDAS and ZŁOTOLITY (which means gilded or embellished with gold) 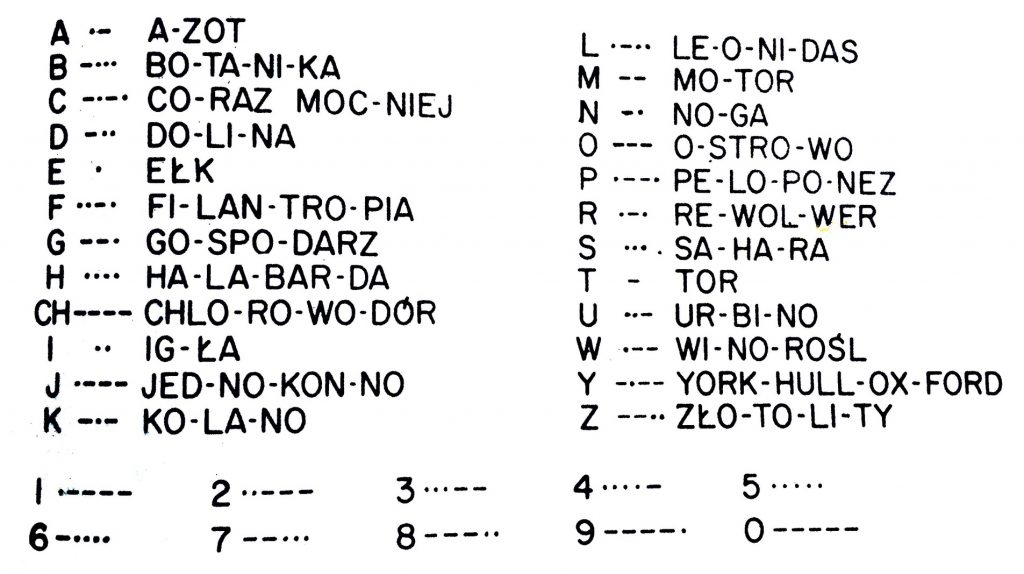 And even better, a song written by Paweł Żaba to remember it, sung here  by the harcerki(girl scouts)  from London:

After hearing it, I’m sure you’ll be humming the melody, if not learning the whole of the code.
Remember if the syllable doesn’t have an O it’s a dot, if it has, it’s a dash.
If  you like this post why not subscribe to get new posts

Warsaw Uprising: Why I stand to attention at 17.00 on 1 August
"Stańcie do Apelu” - stand for the roll call always sends a shiver through my spine. The silence just before a soldier or scout reads this at 17.00 on the...
206 Likes

11 November – origins of Poland’s National Independence Day
For those of us brought up on 11 listopada (11 November) concerts in which we were often on stage and attending obligatory patriotic masses, this day linked to Poland's regaining of...
121 Likes
We use cookies on our website to give you the most relevant experience by remembering your preferences and repeat visits. By clicking “Accept”, you consent to the use of ALL the cookies.
Cookie settingsACCEPT
Manage consent