The unbelievable tale of Wojtek the bear in Scotland 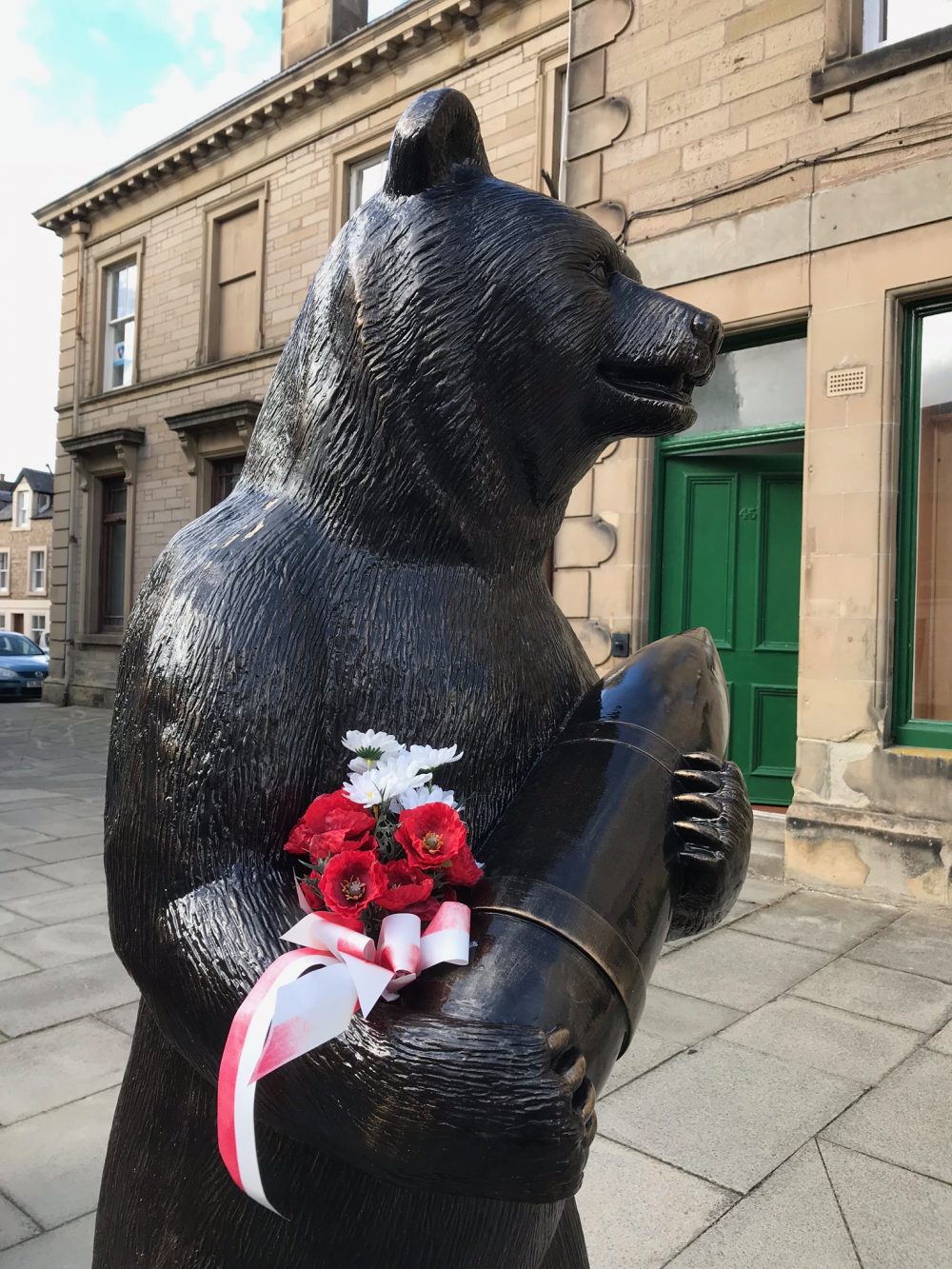 The story of Wojtek the bear conjures up fond childhood memories of reading Lasocki’s book about him at Polish Saturday School. It is a unique and remarkable tale, one I believed was known to very few. However, when I met Scottish writer Aileen Orr recently, I discovered that Wojtek is very much in the hearts of thousands living in the Scottish borders today. Quite suddenly the tale of this brown bear who took part in the Battle of Monte Cassino, who smoked and drank and retired to Edinburgh after WWII, has become larger than life again.

How did Wojtek come to be in the Scottish Borders? 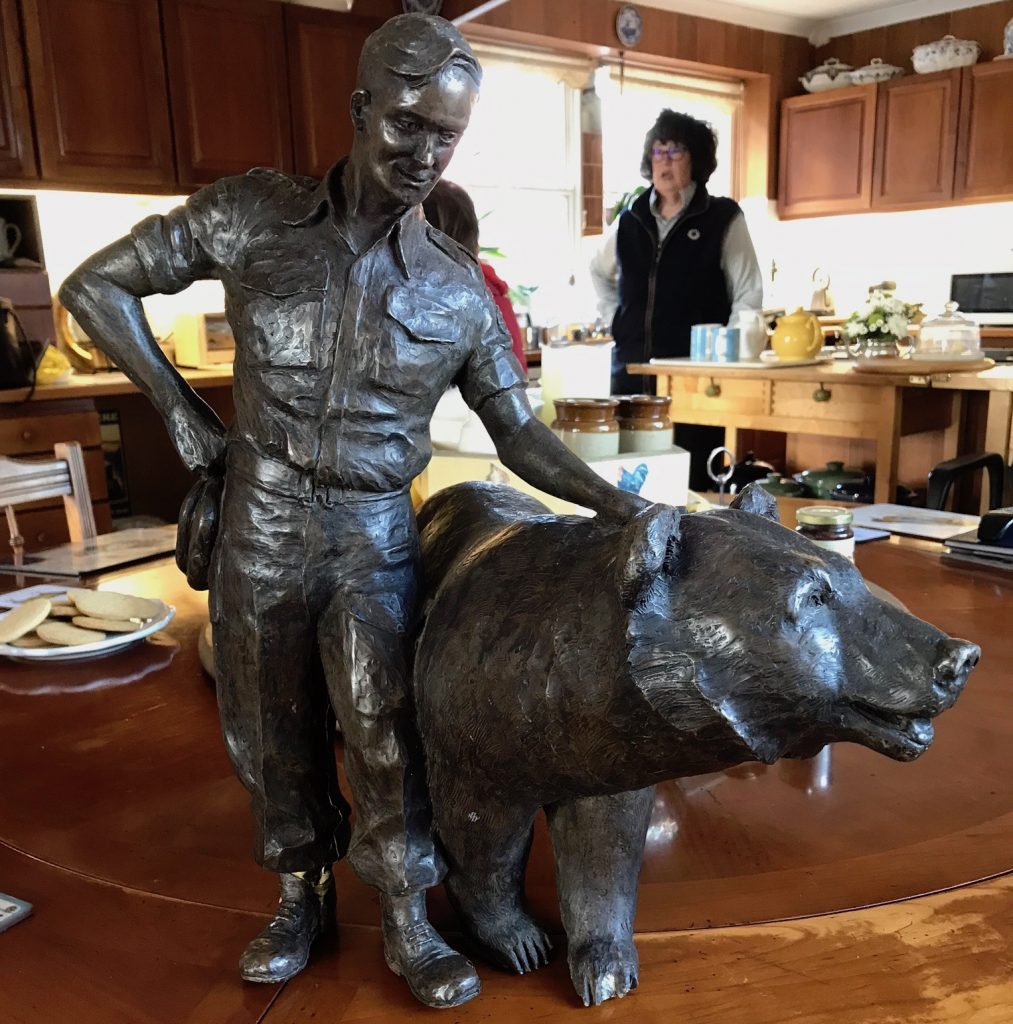 A maquette of the Edinburgh statue

After fighting with the II Polish Corps in Italy during World War II, Wojtek arrived at Winfield Camp, near Hutton in Berwickshire on October 26th 1946, together with the 22nd Company of soldiers. He was the Company mascot.

Over tea and cake, Aileen told me about her book “Wojtek the Bear” which was inspired by visits as a little girl to Wojtek, then in Edinburgh Zoo. She vividly recalls the stories of ex-servicemen and local people who knew him when he was stationed at Winfield Camp. The book was written with great passion, in order to raise money to commemorate Wojtek with a statue.

Born in the Zagros mountains in Persia (now Iran) in 1942, Wojtek the bear-cub was bought from a half starved local boy who had put him in a sac after the bear’s mother had been killed by hunters. A group of Polish soldiers, recently released from Russian labour camps, were travelling across the region towards Palestine to continue their training. They exchanged food with the boy for the bear and then fed him milk from a bottle with a rag as a teat. Their commanding officer realised Wojtek was a soothing influence on the men and women in his command. All were suffering from the ill treatment they had received in the Russian labour camps. As Wojtek grew, he was soon playing tag and having wrestling matches with the men.  He would eat and drink sitting upright with the men, and for him they were, quite simply his family.  Beer from a mug or bottle was his favourite drink and on more than one occasion he raided the stores looking for sweet treats. He also wanted to smoke cigarettes like his companions, insisting they were lit first before swallowing them whole. In order to stay with the troops and be transported to Europe with them, Wojtek had to be enlisted with a rank and number, becoming Private Wojtek and getting his own soldier rations. His moment of glory came during the battle of Monte Cassino in 1944 when he carried ammunition for his colleagues.

Did he really carry ammunition?

It’s not just a story, embellished by soldiers in the telling. There are several witnesses from other units who saw him doing this dangerous job. The 22nd company was one of the artillery units tasked with delivering ammunition to the forward positions of the battle, driving up hairpin bends in the dark to avoid detection, then unloading the lorries before returning for more as quickly as possible. The deafening explosions frightened Wojtek at first, but one day standing upright he held out his front paws and started carrying the shells as if it was the easiest thing in the world, never dropping one. His heroics during the battle earned the company a special military badge featuring Wojtek carrying shells. 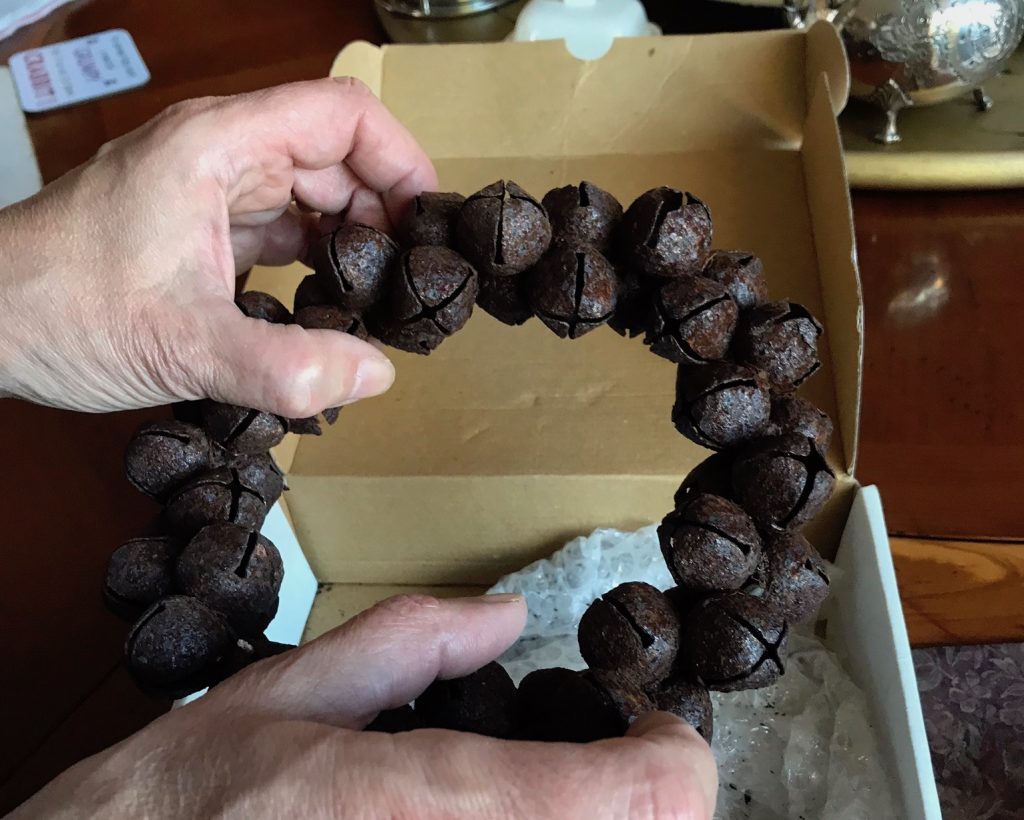 Aileen’s grandfather Jim, who was in the British Army during the war, trained the Polish troops to get them ready for battle and met Wojtek during his time in Palestine. When he returned home, he visited the camp and played with Wojtek, as did all the local children who were allowed to sit on his back. Although a lot of the time Wojtek was free to roam the camp, he was tied up at night and had a cuff of bells on his leg so the soldiers knew where he was at any time. Wojtek despite his strength could be a very gentle bear, playing with a beetle for hours on end though he also enjoyed stalking and frightening sheep. He attended local dances with the soldiers, sitting upright and swaying to the music and loved to touch and nuzzle people.

During my visit to Berwickshire whilst in Duns, where Polish soldiers were stationed during the war, just by chance I met a couple who also had memories of Wojtek in their family. Duns has a statue of Wojtek in action, donated to the town by their twin town of Zagan in Poland.

Married to the owner of the land on which Winfield Camp was situated, Aileen has always wanted to remember Wojtek in some way and over time the idea of a statue was formed. The memorial in Edinburgh, Princess Street Gardens, was originally planned by Aileen to be situated on the former Winfield Camp but when the news went viral and the story caught on worldwide, the expectations grew about it’s size and place. Aileen set up the Wojtek Memorial Trust with others, to fund the statue which took eight years to complete and was unveiled in 2015.

When I visited Aileen, she took our group down to where the camp had originally been, today no buildings remain. In the dappled autumn sunshine she led us to a pool where Wojtek would swim during his time at the camp. 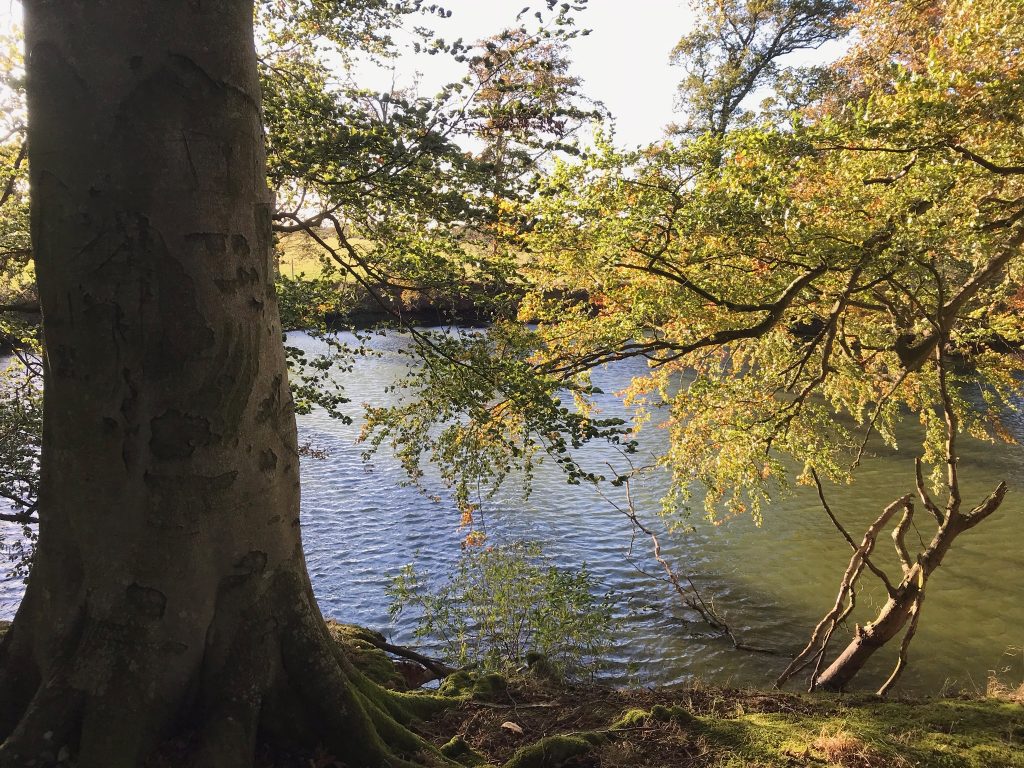 And on the tree on the left, Aileen pointed out marks amongst people’s name carvings – the places where Wojtek scratched  his way up the trees, which he loved to climb. It brought tears to my eyes as it was just as if he’d been here moments ago. When the Polish soldiers at Winfield were being prepared for civilian life and gradually began to leave the camp for work, the difficult decision of what to do with Wojtek had to be taken. Sadly for him, he couldn’t continue to be ‘part human, part bear‘ as there was nowhere for him to live. Rather than have him shot, the soldiers agreed with leaden hearts that he would be safe and looked after in Edinburgh Zoo. Local people helped with his transport there, but he probably never understood why he was put behind bars. The soldiers visited him and he would perk up at hearing Polish voices but life was never the same again for him. He died at the age of 21 in 1963. 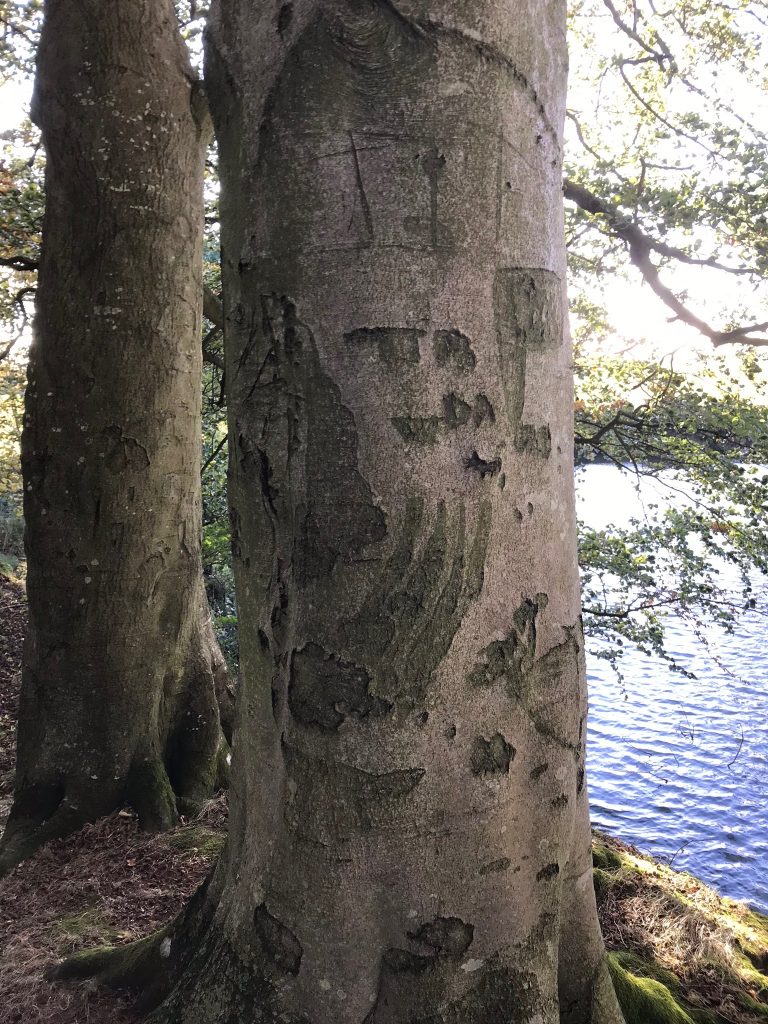 The Polish soldiers who looked after Wojtek would, however, have been delighted to know that his memory remains alive. Aileen’s interest in the story and determination to honour Wojtek on behalf of the Scottish people, has reaped great rewards. She has been honoured in Poland, gives talks to children and adults about Wojtek and has now set up Wojtek Scotland which raises money for Wojtek-related projects which also involves collecting teddies to go to children around the world, particularly in the countries where Wojtek lived. 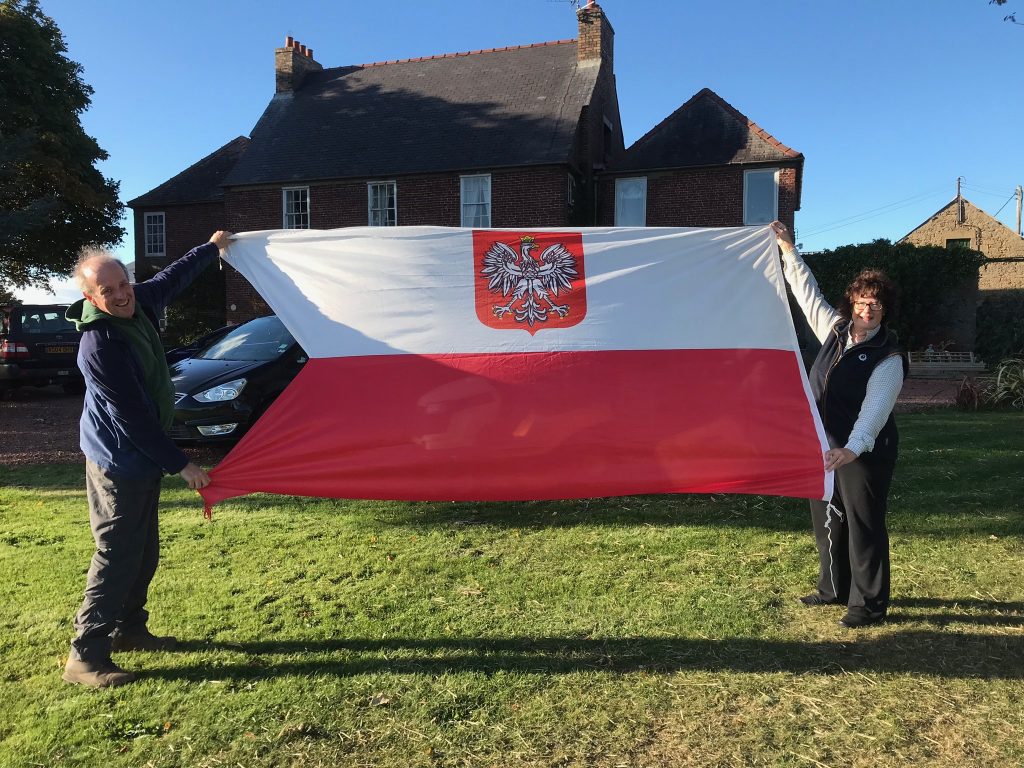 Aileen showing off the Polish flag she was gifted in Poland

Thanks to Aileen, Wojtek is now alive in the memories of so many more people than he ever hoped to meet. The makers of “The Snowman” are making an animated film all about this extraordinary bear which means, he will have been loved not only by the Polish soldiers and Scottish children, but hopefully by hundreds of thousands of children around the world.

read these articles for more information about the battle of Monte Cassino and also what happened next after the battle.