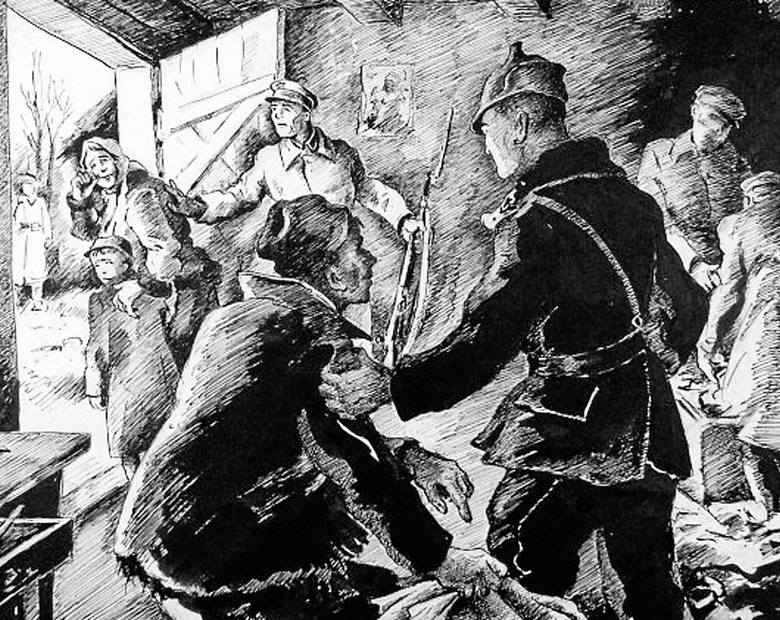 For years few spoke about it. Many shared the feeling  “You didn’t want to tell them because they wouldn’t understand or would laugh so you just closed yourself up.”  The story of the horrifying crime carried out by the Russians during WWII on the people of  Eastern Poland wasn’t well known and still isn’t. How can the forced deportation of up to 1.7 million men, women and children of whom only a third survived not be common knowledge?

As children of the children who survived, we too felt the fear of telling other children how our parents got to the UK, receiving incredulous or blank looks as if we were making it up.  Now there are books written by the survivors or their children and many reader comment proclaim that this story should be told. And yet it’s never in the public consciousness, despite there being ever more interest in WWII.

There is a documentary film that has been shown on the History Channel and in many other countries but should not be forgotten and shown again and again: A Forgotten Odyssey – The Untold Story of 1,700,000 Poles Deported to Siberia in 1940. Made in 2000, I was vaguely aware of it, but didn’t know much about the authors Jagna Wright and Aneta Naszyńska, who both died tragically early.  Jagna devoted the last 15 years of her life, cut short by breast cancer, to make  two documentary films with professional editor Aneta. Jagna taught herself the craft of filmmaking and started recording the testimonies of the dwindling witnesses to the Siberian genocide.  It’s available on  YouTube, split into parts – choose the part you know least about to watch or share with friends so they understand.

Fear of the unknown

As many of you know, the nightmare began in the middle of the night on 10 February 1940  for many families, including mine and for others over the following months. After Russia invaded Poland, Stalin deported 1.7 million Poles to slave labour camps in Siberia, Kazakhstan and the Arkhangelsk Oblast in the north, in cattle trucks. Journeys that lasted weeks until they reached camps where the Russians assured them that bourgeois Poland was finished, and that they would never leave the forests where they had arrived to work with little food or shelter. Each family’s story is unique, seconds or minutes to pack affecting whether they lived or died, as provisions, warm clothes and bedding were vital to survival.

You will die here

The terrible ordeal of working in mines, farms or remote logging camps was often too much for the old or young. If you didn’t work you didn’t eat. The winter temperatures went down to minus 40 yet work carried on. Some splashed themselves with water, which formed an icy armour on their coats to keep warm. No medical attention meant many people died. They were told “you will get used to it and if you don’t you will die the death of a dog”. Food supplies were barely enough to survive on yet the work was incredibly hard. Remember, these are the survivors talking.

Released but where to?

On 22nd June 1941 Nazi Germany attacked the Soviet Union, forcing them to acknowledge all the help they could get to retaliate. In London the Polish Government in Exile and the Soviet Union came to an agreement that the Soviets would release their Polish prisoners so that an army, commanded by General Wladyslaw Anders (also to be set free from prison), could be formed in Russia. The Poles had to find their way across vast distances, helped only by Polish consular officials and Persons of Trust at railway junctions and cities. Some groups numbered less than 10% of the total numbers of prisoners who had entered those camps. The others were long buried under the Siberian snow. And typhus and other diseases killed off even more of the weakened, bedraggled people.

In December 1941 as the German armies marched towards  Moscow, General Sikorski (the Polish PM in exile) met with Stalin to move the fledgling army to the south of Russia. As the exhausted refugees arrived, General Anders wondered where all the Polish officers were. A further meeting in March 1942 led to agreement that half the army could move to the British zone in Persia (Iran) followed by the other half in July 1942, when Churchill intervened. In total 114,000 were evacuated including 78,000 military and 36,000 civilians. But where were the rest?  The German discovery of the horrific Katyń massacres answered that question.

Fighting for a free Poland and homes to return to…

Any Poles still left in Russia and hoping to join the army, were sent back to Soviet farms to work and after the war, some made it back to Poland. Meanwhile the newly formed Polish army fought valiantly alongside the Allies in France, Belgium, Holland and Italy with more than 45,000 losing their lives.  The newly proposed borders drawn for post war Poland between Churchill, Roosevelt and Stalin at Yalta meant all these people had lost their home towns to the Soviets and had no homes to fight for anymore.  Letters from Polish soldiers complaining about this were censored as the Soviet Union were an official ally and nothing was to be said against them. After the war, the odyssey continued as Poles, refusing to go back to the same regime, were scattered all over the world, wherever they could build a new life.

In the introduction to the whole film, Norman Davies, the well known historian recounts that in no British document has this been acknowledged as a war crime and although the recording was made in 2000, I doubt anything has changed.  A journalist has been quoted as saying that the Poles deported by order of Stalin to Russia, were then deported from history by Western historians. Watch it.  It means that one more person knows the full truth.  Jagna and Aneta also made a second film, a three-part documentary, The Other Truth about the complex history of Polish-Jewish relations.

These women were  true pioneers in the film industry, as still very few films are made by women alone. In this year of women’s emancipation both in the UK and in Poland, these women have left us a legacy we should know by heart.

Feature image is taken from www.swoopingeagle.com

Polish Resettlement Camps on British soil link us all
In our search to find out our Polish families' lives both in Poland and in exile, one key element for the Polish soldiers, for their families and also displaced people...
128 Likes

Polish travels in western Ukraine
The plight of people caught up in war in our lifetime is so difficult to watch, given what our parents and grandparents experienced. Poles and Ukrainians have a difficult history...
149 Likes

How did Poles deported to Russia in World War 2 escape, to fight on?
The deportation of Poles by the Russians to slave labour camps in the Soviet Union during WWII is well documented if not widely known. You can read the testimonies here....
166 Likes
We use cookies on our website to give you the most relevant experience by remembering your preferences and repeat visits. By clicking “Accept”, you consent to the use of ALL the cookies.
Cookie settingsACCEPT
Manage consent